We’re heading towards the end of the summer, which can only mean one thing – the autumn rugby season is upon us! With the London Double Header only weeks away and the Old Mutual Wealth Series hot on its heels, it’s time to brush up on our rugby knowledge. And for me, that means only one thing.

It’s time to learn about the scrum.

A unique and utterly baffling aspect of rugby. For those well versed in the laws of the game, the scrum is an integral function for restarting play after a minor infringement. For us mere beginners, however, the scrum is the ultimate show of strength, power, and teamwork.

Despite being an impressive sight to see, there is a lot more to a scrum than meets the eye. It is not just 16 men battling it out in what can only be described as the opposite of a tug of war (a push of war?!). There are a lot of tactics involved and each member of the scrum has a crucial part to play.

When a side commits a minor infringement, the ball is handed to the opposition, who have the ‘put-in’ – in our example below, the red team get the ball. They should win the ball and be able to attack or claim territory by kicking. 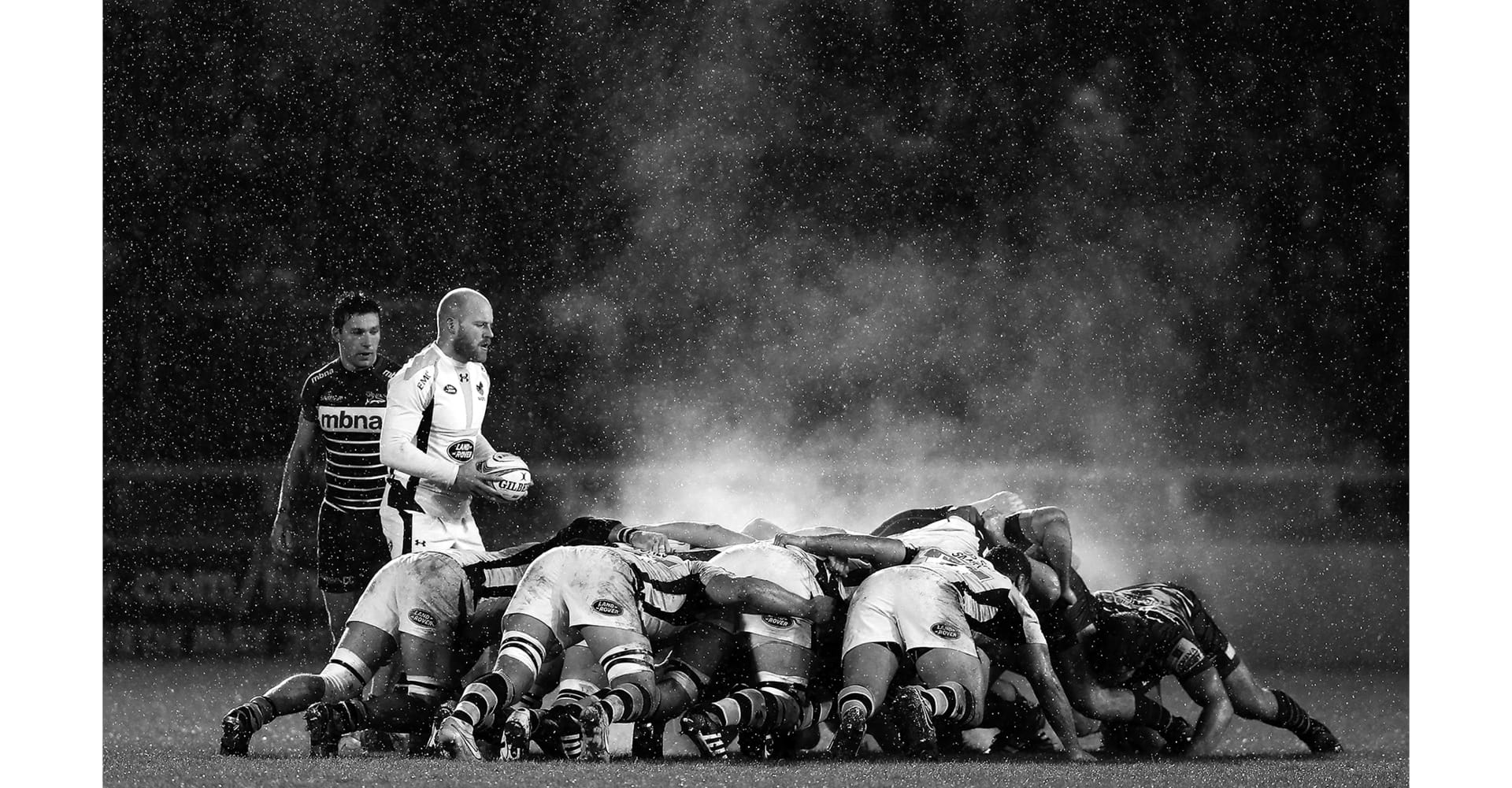 However, both teams can compete for the ball and the other side (the white team in the example below) can either win a penalty, make it difficult for the team with the put-in to get the ball cleanly, or even win the ball themselves.

These are the guys you always want on your side! Normally the heaviest on the team, the Props secure the scrum so the ball can be put in. They push the opposing players back whilst supporting the hooker. There are two props – a ‘tight-head’ and a ‘loose-head’.

In the scrum, a hooker’s job is to ‘hook’ the ball back to their number 8. The hooker of the opposing team will normally avoid attempting to hook the ball, but will add his weight into the scrummage and support the props. 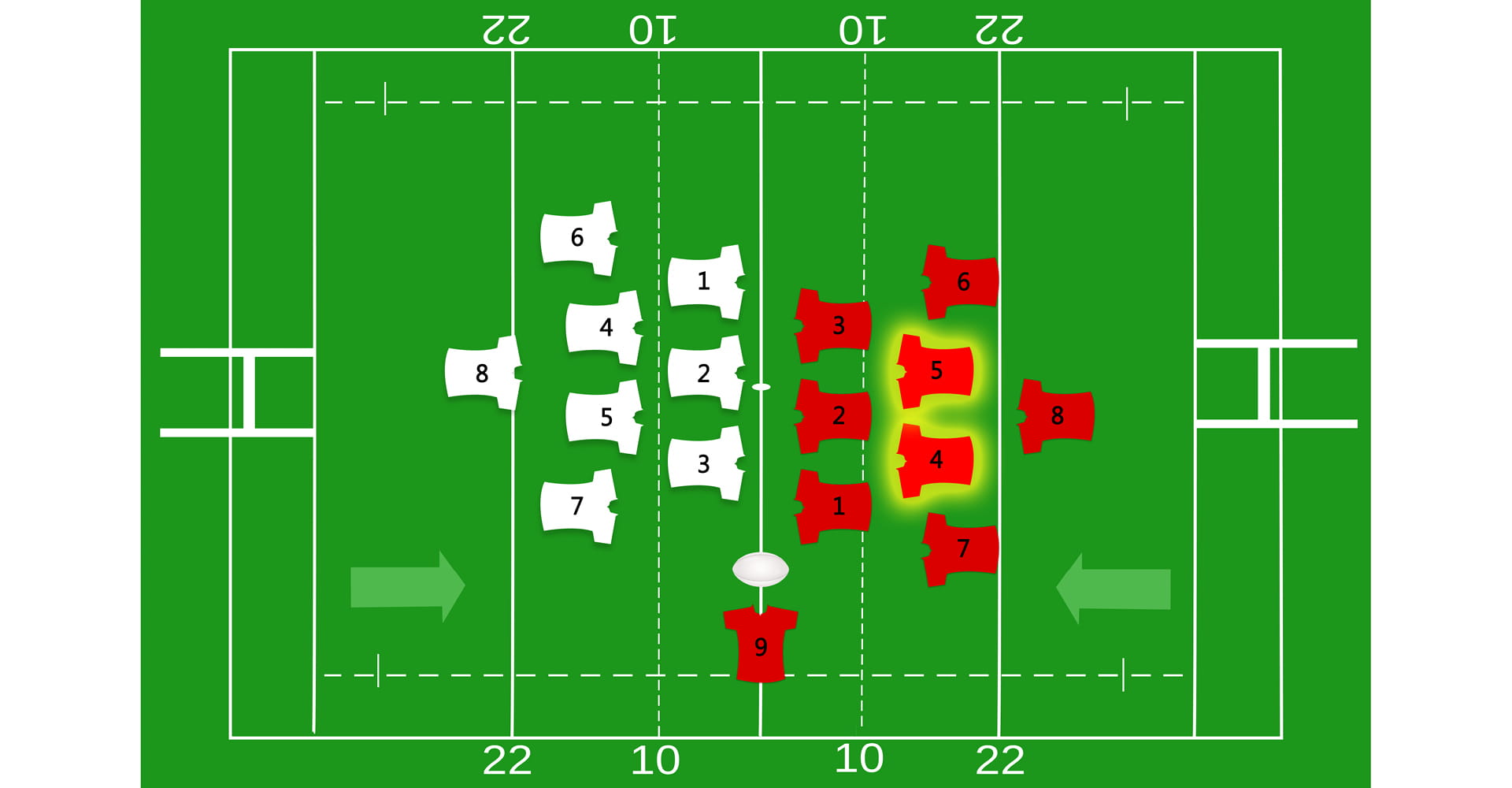 These guys are the engine of the pack, they provide the power to push. The locks are the tallest men on the team and have one job – to push the scrum forward and attack the opposition. 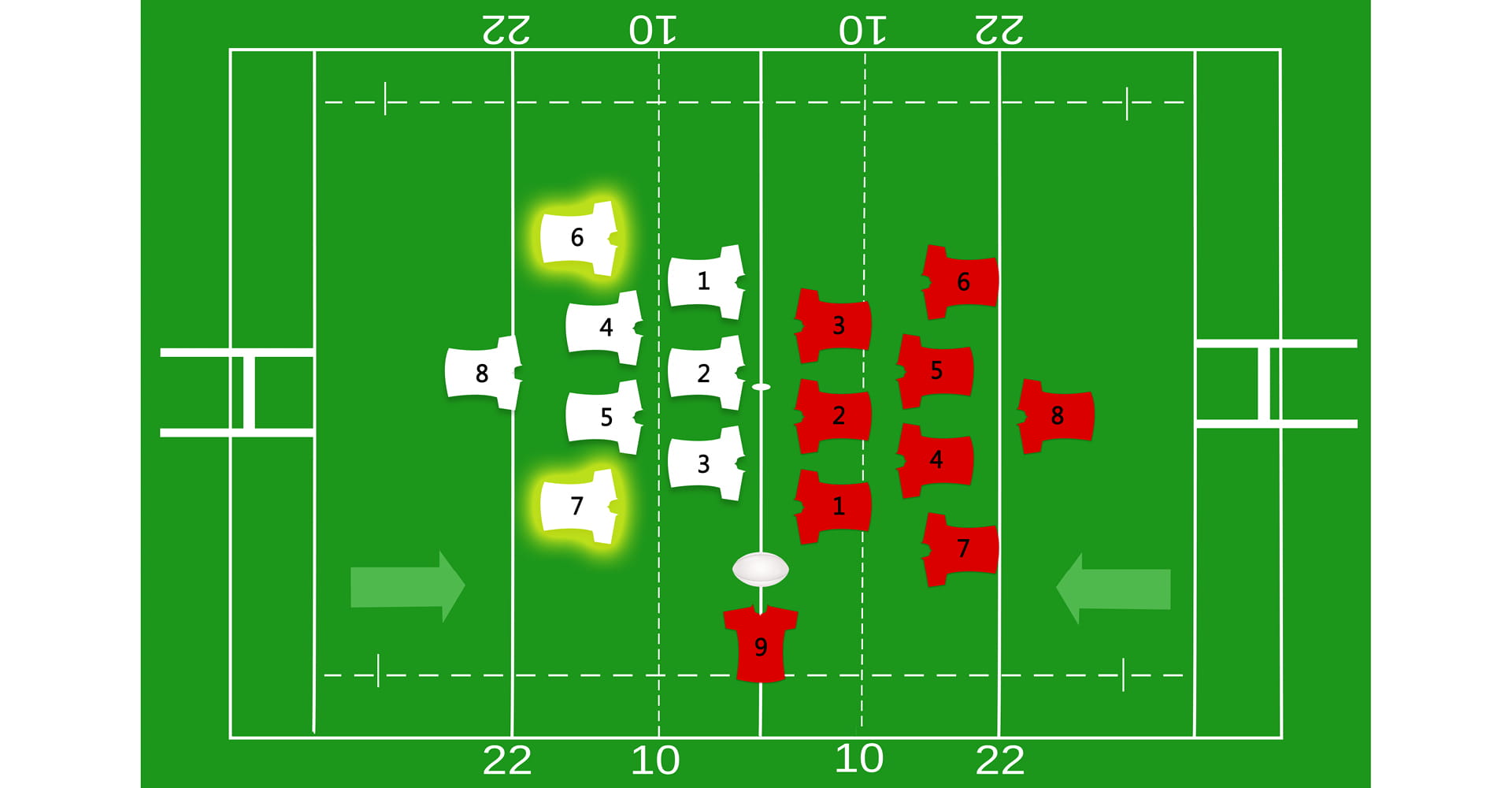 The attacking scrum’s flankers help to push and provide support to their props. It is the defending side’s flankers, however, that have the bigger responsibility.

There are two flankers on each team, the ‘open-side’ and the ‘blind-side’ – they are the search-and-destroy players (think infantry on a battlefield). When defending, they are constantly on the alert for when the ball comes out of the scrum so that they can tackle any forward plays. 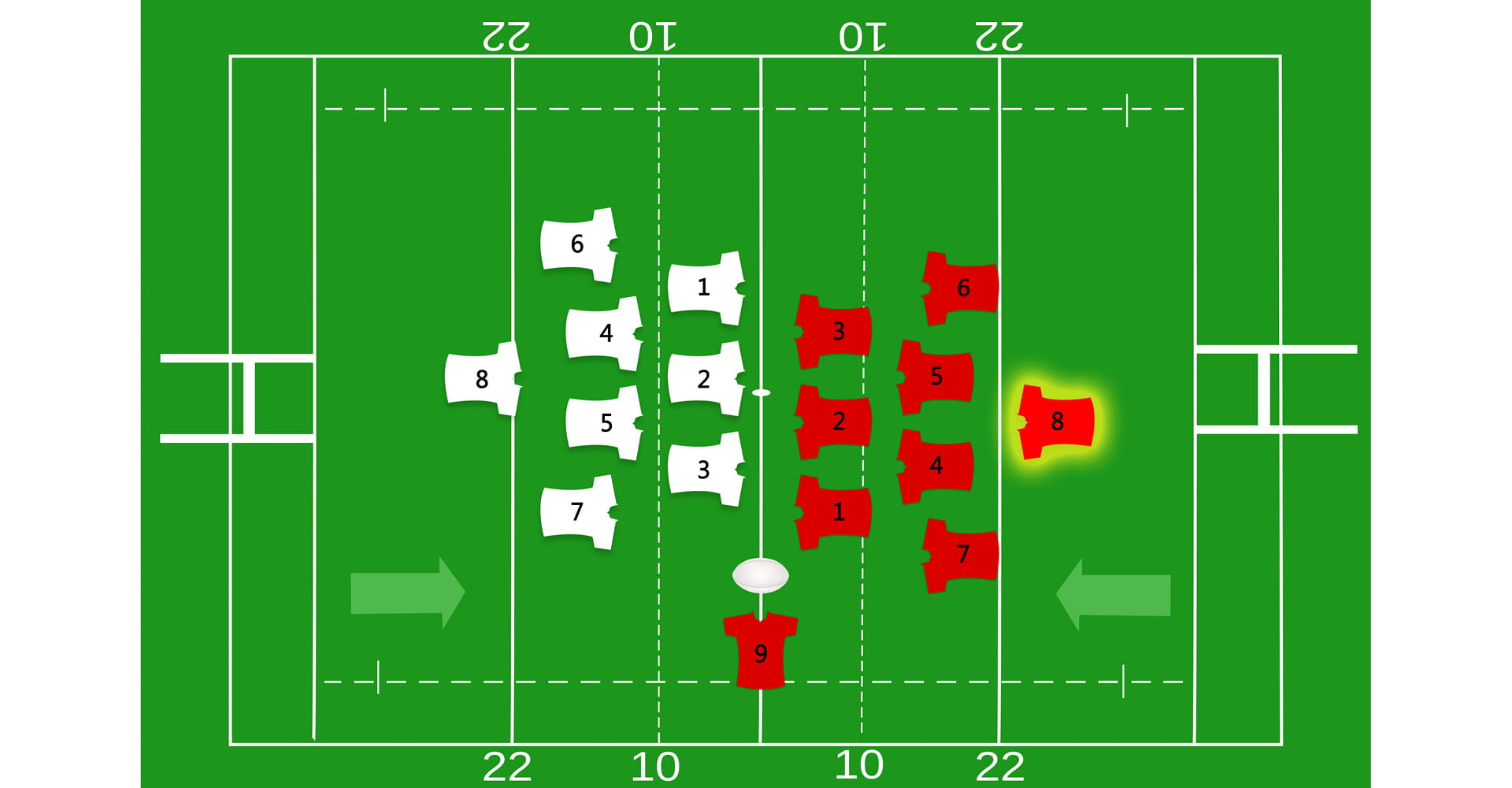 The number 8 is big, athletic and powerful. They push at the base of the scrum with their head between the second row.

If attacking, they’ll control the ball when it arrives at their feet and have several options for play. They can hold it in as their team pushes the defending team back; they can let their scrum-half pick it up or flip it back to him; or they can pick it up and run like their life depends on it! 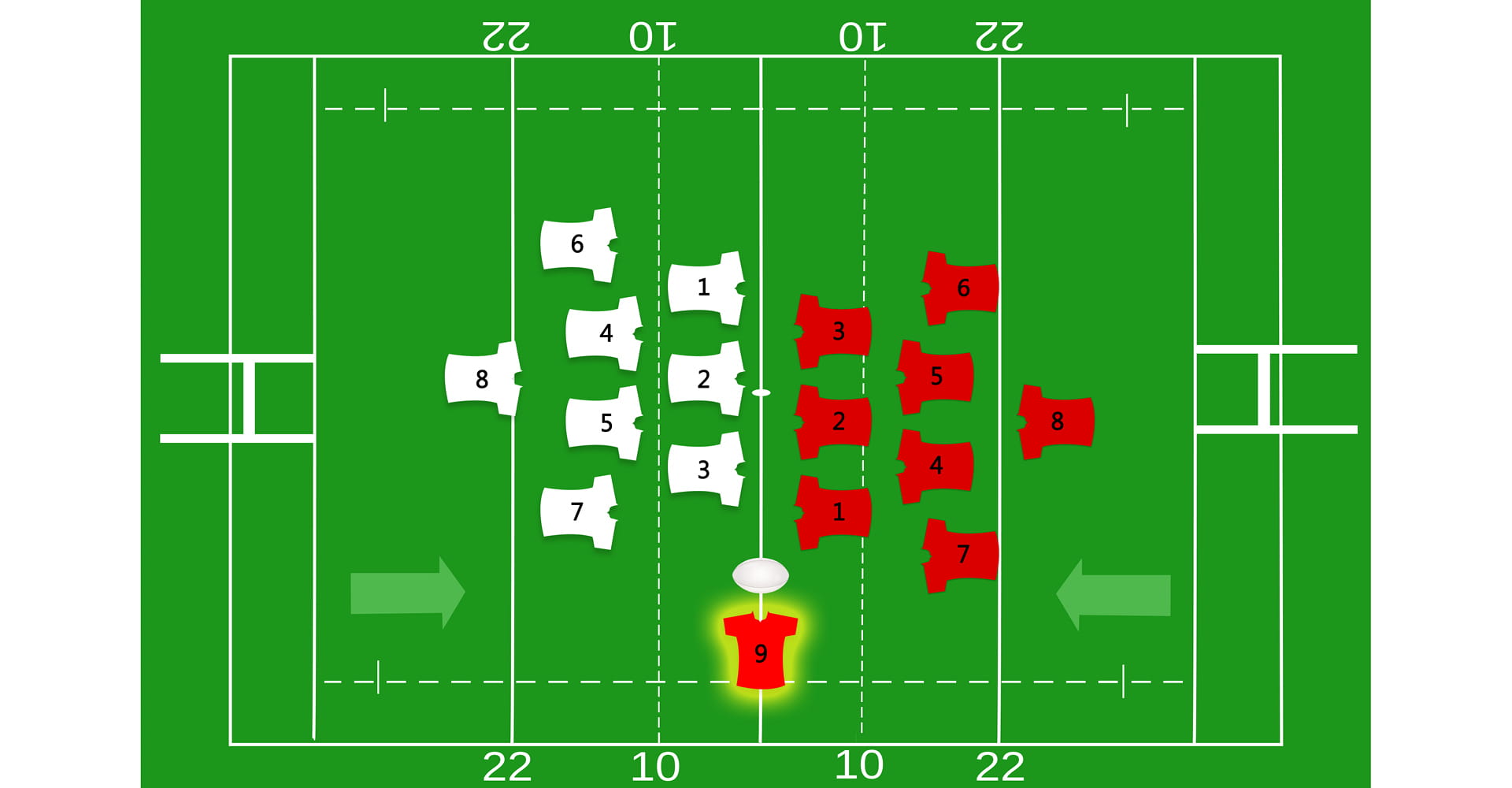 For the team with the put-in, the scrum-half is the player that rolls the ball into the scrum. Once the ball has been won by his side, they’ll run round the back of the scrum, ready to pick it up or take a pass from the number eight.

Now you have the basics down, the next time you watch a rugby match, you can witness a scrum with a knowing (and somewhat aggravating!) smile on your face.

Don't miss out on your chance to experience the Old Mutual Wealth Series at Twickenham. Click here for more information.