England will take on South Africa this summer in a three Test Match tour and head coach Eddie Jones has named eight uncapped players in his squad. Here is all you need to know about England's new faces..

England also take on South Africa this Autumn (3 November 2018), click on the banner below for more information. 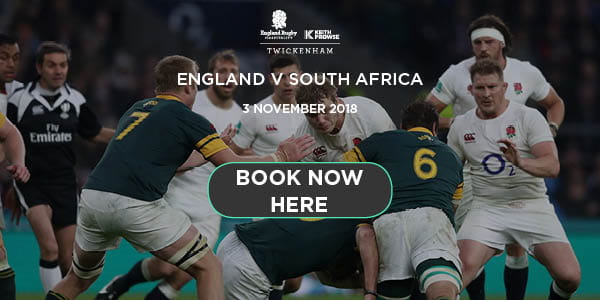 To read more of our rugby blogs Click Here

For those that prefer text, England's uncapped players are as such:

Brad Shields has recently qualified to play for England through his parents, he will bring a wealth of experience to the team as well as the strong leadership qualities he picked up while captaining the Hurricanes.

The 27-year-old is renowned for being a real physical presence, with solid ball carrying capabilities, as well as being a menace at the breakdown. His versatility across the back row will be a major asset for England.

Ben Earl was a member of the England U20 side that won a Six Nations Grand Slam in 2017 and later reached the final of the World Rugby U20 Championship in Georgia. It was at this match where he scored a try against eventual winners New Zealand.

Ben is an intelligent back rower and has recently committed his future to club side Saracens, for whom he has made 16 senior appearances. He scored a try on his Aviva Premiership debut against reigning champions Exeter in March. Earl is definitely one to watch.

At 6’7 and 112kg, Jonny Hill is an imposing figure. He has quietly gone about his business in the engine room of reigning Aviva Premiership champions Exeter Chiefs. A stint at Hartpury College led to his appearance at a couple of Anglo Welsh Cup matches for Gloucester. He has since made his debut in January 2016 against the Cherry & Whites for the Chiefs.

Hill has proven himself as a fierce competitor at the highest level of the domestic scene. Credited for his hard work ethic around the field, the 23-year-old is an outstanding line out operator, whose size doesn’t hamper his athleticism.

A flanker who can also play at No 8, Jack Willis has risen through the ranks quickly at Wasps, showing maturity way ahead of his years. He has been shortlisted for young player of the year.

The 21-year-old made his senior debut against Sale Sharks in the Anglo-Welsh Cup in November 2016 and months later, against the same opposition, he gained his Premiership stripes. Being solid at the breakdown and effective ball carrying are trademarks of his game. Willis won the 2016 World Rugby U20 Championship with England in Manchester.

Scrum half Dan Robson is a sharp operator, quick at the break down, deceptively fast, with a high rugby IQ and sound kicking game.

He has scored 27 tries for Wasps in 83 appearances and represented England at U18, U19 and U20 level. Dan was part of the U20 squad that won the 2011 and 2012 Six Nations Championship and reached the then IRB Junior World Championship final in 2011. Likely to be a great asset for Eddie Jones to bring.

Nathan Earle made a good first impression on England fans when he scored a try in the 28-14 win over the Barbarians last summer.

The Saracens wing showed blistering pace that day, a skill he has used time and time again since his professional debut against Worcester Warriors in 2012, and it’s that acceleration - coupled with a great understanding of support play - that has given the 24-year-old a fearsome reputation for finishing.

He was also part of the successful England side that won the World Rugby U20 Championship title in 2014, where he crossed the whitewash six times in five matches.

The son of 60-times capped former Scotland scrum half Bryan Redpath, who captained his country on 26 occasions, Cameron made his senior debut for Sale Sharks in the 24-21 Anglo-Welsh Cup win over Worcester Warriors.

Now the 25-year-old has earned a senior call up after a string of impressive performances on the domestic scene, as well as on the European circuit.

The 25-year-old is quick off the mark and is supremely accurate from the boot, a skill he shares with stablemate Richard Wigglesworth. These attributes, coupled with fine form saw him represent England U20’s at the 2012 World Rugby U20 Championship, and England Saxons later that year.

His first England U20 appearances were off the bench for Dan Robson against France at Vannes, and Ireland at Adams Park in 2012. He then played in four of the five matches that followed in the then IRB Junior World Championships in South Africa.