Once the preserve of just a handful of traditional nations, rugby is now quickly becoming a truly global game. The rapid recent improvement of the Japan rugby team is a prime example of this, as is the fact that the Japan Rugby World Cup next year will be the first ever to be held on the continent of Asia. Ahead of next year’s tournament, then, let’s take the opportunity to look back at the history of rugby in Japan before looking forward to Rugby World Cup 2019 itself. 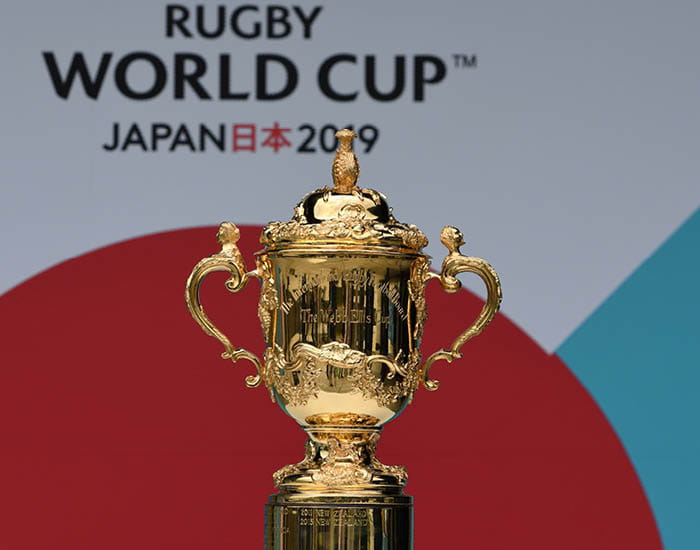 The first evidence of rugby being played in Japan dates all the way back to 1866, making the game longer established in the Asian nation than in any other country outside of Great Britain and Australia. In that year, the Japan Times newspaper reported on the foundation of the Yokohama Foot Ball Club and noted that ‘as we happen to have two or three Rugby and Winchester men in the community, that we may be certain that we shall have really good scientific play.’

Those ‘Rugby and Winchester men’ were part of a British army regiment posted in Yokohama, and it was the presence of the soldiers which largely explains the formation of the rugby club. Those soldiers from the regiment, after all, took up most positions in the club’s committee as well as accounting for the majority of the playing staff.

Regular matches between the club and visiting armed forces sides and between various other teams took place in Japan over the ensuing decades, but it wasn’t until around 1899 that native Japanese rugby players really started to become involved in the game.

By the 1920s, it is estimated that close to 1,500 clubs had been established in Japan and that Japan rugby could lay claim to around 60,000 registered players. In November 1926, then, the Japanese Rugby Football Union was established as a governing body in the country for the increasingly popular sport. That led to the creation of the first official Japan rugby team, which would tour Canada in 1930 and then welcome a Canadian team to Japan two years later. 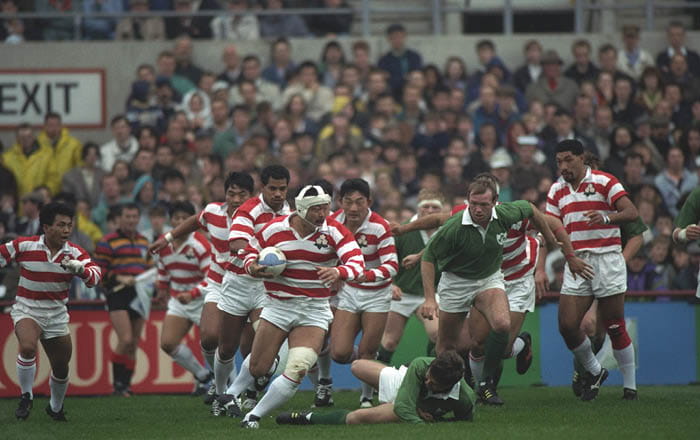 Moments of Triumph for the Brave Blossoms

From the 1950s onwards Japan embarked on a number of further international tours and began to welcome some of the world’s best teams to their own shores. In 1968, the Japan rugby team recorded a collection of victories over the Junior All Blacks but the early history of the national side was largely built around heroic defeats.

Those hard fought losses to far more experienced and better established teams included a 3-6 reverse against England in 1971 and a 24-29 failure against Wales in 1983, and helped to christen Japan as the Brave Blossoms. Perhaps the Japan rugby team’s first really notable win came against a weakened Scotland XV in 1989 but it was against other minor rugby nations, especially those also from Asia, that Japan enjoyed most of their success. That success has included emerging from Asian qualifying to make it to each and every Rugby World Cup since the inaugural tournament in 1987.

Once Rugby World Cup 2019 arrives, Japan will have played a total of 28 previous World Cup games and won just four. Three of those four victories, however, came at the most recent 2015 World Cup, where the Brave Blossoms were nothing short of a revelation. Eddie Jones, currently head coach of the England national team, was in 2012 appointed as head coach of the Japan national rugby union team, to lead them to the 2015 Rugby World Cup. Jones’ first move as the Japan coach was to reduce the number of foreigners and to try and encourage the Japanese to play their own style. He also said his goal was to bring Japan up a level, to be among the top ten.

Wins over the United States and Samoa at that tournament were reasons enough for Japanese rugby players to celebrate, but it was the defeat of giants South Africa which made the rest of the world sit up and take notice. Recognised by most as the biggest upset in the history of international rugby, Japan’s 34-32 win over the Springboks wasn’t quite enough to see them qualify from the pool stages, but could prove an ideal springboard for their home tournament next year. 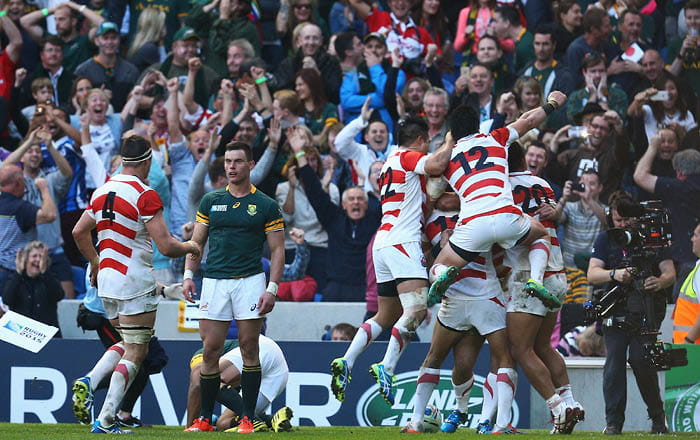 The first Rugby World Cup ever to be held on the continent of Asia will take place in Japan between the 30 September and the 2 November 2019. The tournament’s games will be spread between 14 different venues across the country, including stadia in Tokyo, Osaka and – fittingly giving the history of Japanese rugby as described earlier – Yokohama.
At time of writing, 17 of the 20 sides which will take part in the tournament have secured their places in Japan and the pool stage draw has already been made. The Japan rugby team will face Ireland, Scotland, Russia and one as yet undetermined qualifier in that pool stage, and as such will surely be hopeful of at least two more World Cup victories. Other notable pools, meanwhile, include one which will pit England, France and Argentina against one another and one which involves New Zealand, South Africa and Italy.

As well as hoping that Rugby World Cup 2019 will give them a chance to put on a good show, the JRFU will surely also harbour hopes that the tournament will have a longer term legacy. Their ‘Impact Beyond 2019’ legacy programme is aimed at further growing rugby participation in Japan, as well as otherwise aiding the development of grassroots rugby.

The JRFU will hope that their programme will have similar results to the scheme implemented by the English RFU after the last World Cup in 2015. In the year following that tournament, the RFU reported 30,000 new junior players, a 30% increase in female participation in the sport and the take up of rugby by 500 new secondary schools.

The future of Japanese rugby, then, appears as if it could be almost boundlessly bright. If you want to keep an eye on the development of the Brave Blossoms, Keith Prowse offer a range of top quality rugby hospitality packages for you to choose from. Perfect for anything from a birthday treat for a rugby fan to a corporate event sure to wow any guests, our rugby hospitality options are second to none.