It’s been football which has captured everyone’s imagination in the summer of 2018 but in 2019 it will be rugby’s turn to take centre stage. The 2019 Rugby World Cup gets under way in Japan in just over 12 months’ time and there’ll be plenty of teams who fancy their chances of taking home the William Webb Ellis Trophy. 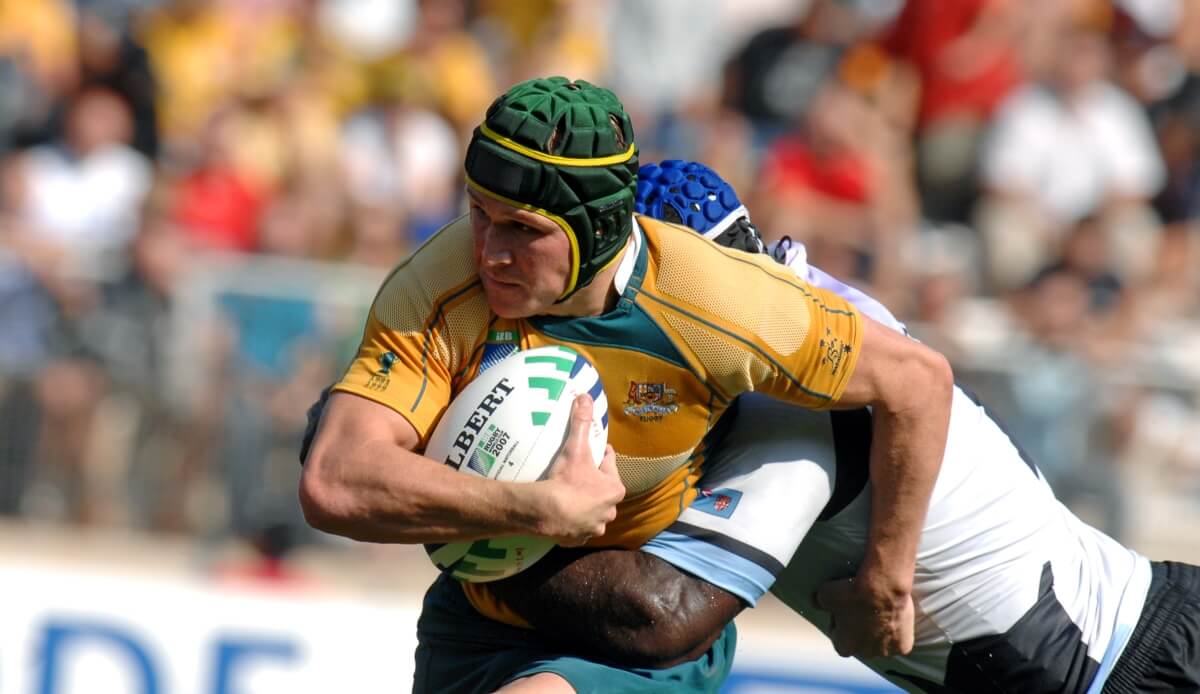 The Australian rugby team are undoubtedly amongst that number, so let’s take this opportunity to get to know the history of rugby in Australia and to examine the team’s chances of glory next year.

History of Rugby in Australia

The first recorded instances of rugby being played in Australia date back to the 1820s, when crews of visiting ships would play local teams, often representing the armed forces. Such matches took place in various major cities in Australia but were perhaps most common in Barrack Square in Perth.

Those kinds of casual matches endured in Australia for decades before, in 1864, the country got its first official rugby club. That was the Sydney University Club and after its formation a whole host of further teams began to be established in the city and its surrounding area.

By 1874, in fact, there were enough clubs in existence for a Sydney metropolitan competition to be established and for the Southern Rugby Union to be founded. Less than a decade later, the spread of rugby through the rest of Australia led to the foundation of the Northern Rugby Union in Queensland.

Those two unions remained the main governing bodies of Australia rugby for many years and in 1899, representatives from each combined for the first time to create an Australia rugby squad.

The Australian rugby team put together by the Northern and Southern Rugby Unions in 1899 faced a touring side representing the British Isles in four test matches. That very first Wallabies team lined up at the Sydney Cricket Ground in their first test and recorded a surprise 13-3 win.

Australia would go on to lose the remaining three tests of the series, but the seeds of a successful international team had very much been sewn. In the early 20th century, a Wallabies squad was put together every few years to face the best the world had to offer. 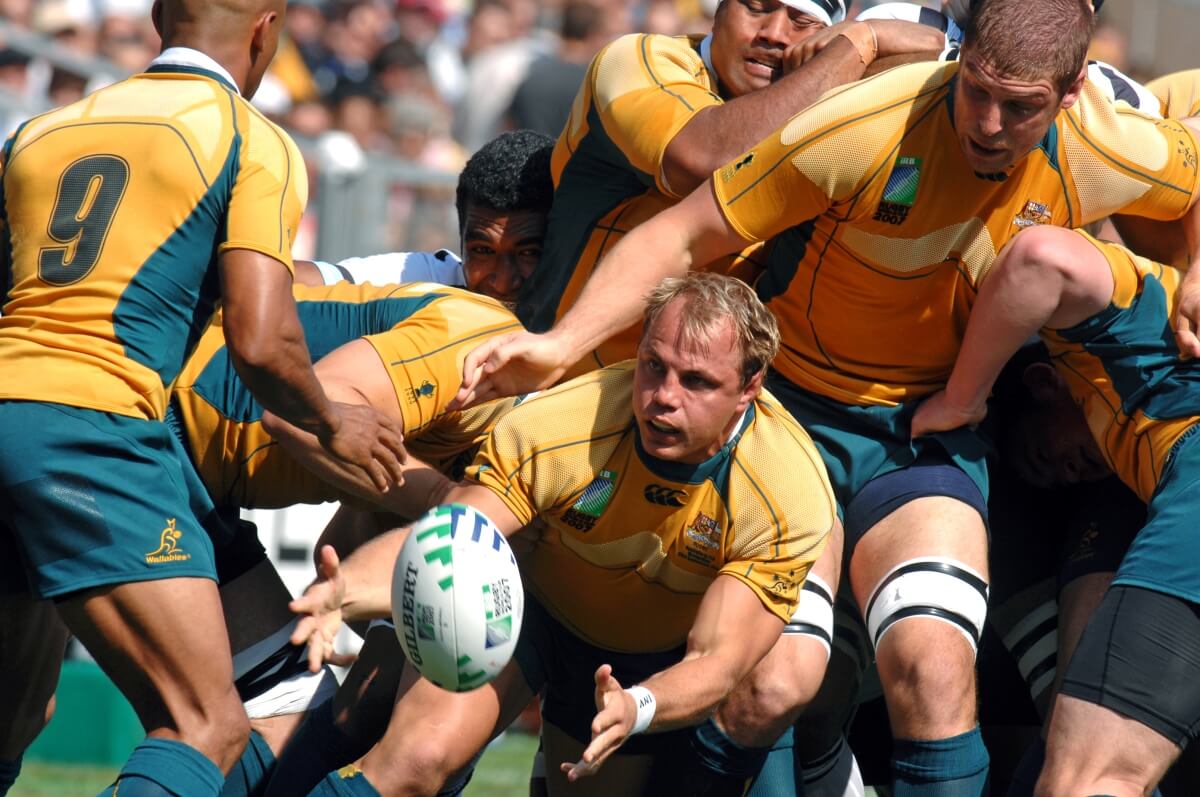 The most popular games during this period were unquestionably those which pitted Australia against near neighbours New Zealand, and in 1908 a match between the sides generated a crowd of over 50,000 spectators.

Wallabies rugby was also introduced to the wider world in 1908. An Australian rugby team went on tour to the UK, Ireland and North America in that year and as such were afforded the opportunity to take part in the 1908 London Olympics. The Australian rugby players acquitted themselves superbly during the games and would go on to win gold against the Cornwall side which was representing England.

That 1908 Olympic gold represented the Wallabies’ first true international glory but rugby in the country would soon be all but suspended. The outbreak of WWI plunged the world into conflict and meant that for a number of decades there was basically no official rugby being played in Australia.

Rugby’s Return & the Rise of the Famous Gold & Green

It wasn’t until the late 1920s that rugby really began to take root once again in Australia. It was in 1929, too, that a Wallabies team first wore an official Australia rugby jersey. Up until that point, players in sides representing Australia had worn the jerseys of their rugby unions or individual clubs.

For a 1929 series versus New Zealand, however, Australian rugby players pulled on an emerald green shirt adorned with the Australian coat of arms. The Australian jersey would stay broadly similar until 1961 when a tour of South Africa, who also wore dark green, caused the Wallabies squad to switch to their now famous gold and green kit for the first time. 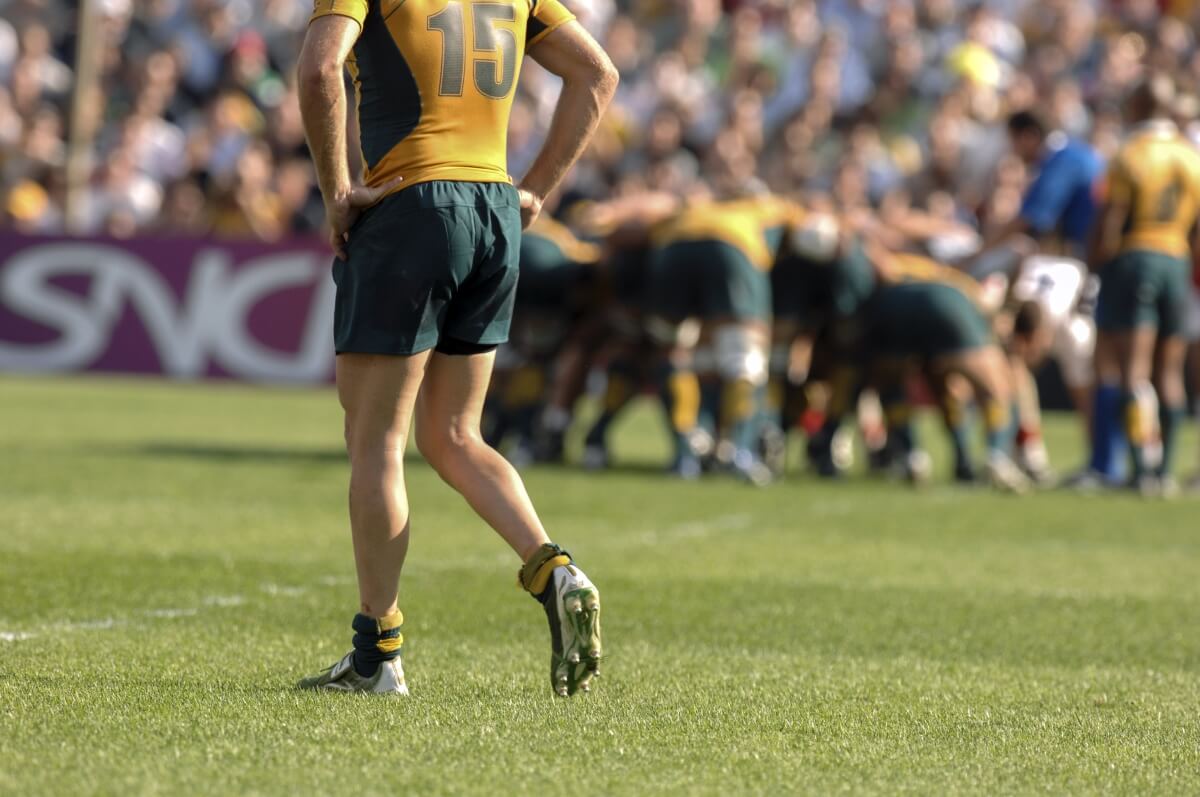 By the 1980s, the Australian rugby team was well-established as an international rugby powerhouse. The Wallabies enjoyed fierce rivalries with both England and New Zealand, and there was a hunger in the country for further international competition. In concert with neighbours New Zealand, Australia first introduced the idea of a Rugby World Cup.

That initial idea finally came to fruition in 1987 and the inaugural edition of the tournament was held in Australia and New Zealand. That first tournament would be won by the All Blacks but the Australia rugby squad didn’t have to wait long for their first taste of World Cup glory. That arrived in England in 1991, when the Wallabies defeated the host nation in the second ever World Cup final and lifted the William Webb Ellis Trophy for the first time.

Following their 1991 triumph, Australia have achieved remarkable consistency of performance on the World Cup stage. The Wallabies rugby team won the title for a second time in 1999 before losing in the final of their own tournament in 2003. A third place finish was later delivered in 2011 and the Wallabies were bridesmaids once more when losing in the final to New Zealand in 2015.

Australian hopes are likely to be high, therefore, ahead of the 2019 Rugby World Cup in Japan. The Wallabies are currently fourth favourites with the bookies for the tournament, however, and might find it tough to overcome the three more fancied outfits of New Zealand, Ireland and England.

Since the 2015 World Cup, Australia have lost a three match series on home soil to Ireland, been beaten five times by England and lost five out of six contests against the All Blacks. Add to that the fact that Australia have been drawn in a pool which also contains a strong Wales team and odds do seem to be stacked against further Wallabies’ World Cup glory. Every rugby fan knows, though, that Australia tend to perform best when their backs are against the wall.

Whether it’s to watch the Wallabies or any other top class international outfit, there’s nothing quite like watching rugby live. Keith Prowse offer a range of fabulous rugby hospitality packages which can let you get closer to the action. Ideal for extra special days out to some of rugby’s most iconic stadia, our rugby hospitality options have been making rugby fans’ dreams come true for decades.