It is an iconic sight in English rugby, the moment a team captain lifts aloft the Premiership trophy, surrounded by teammates and popping Champagne bottles at Twickenham. Two more wins for one of the final four teams left standing in this season’s campaign and that familiar sight of celebratory delight, will once again form itself. The question is, which set of supporters will be singing a winning tune in South West London?

Of the four teams lining up in the 2018/19 Premiership semi finals, three of them know that winning feeling there, with Exeter, Saracens and Northampton having won Premiership titles.

So far Gloucester and their fans have only known heartache at the famous stadium, losing on both of their previous appearances in the Premiership Final. Will they be able to write a new chapter into their history this year? 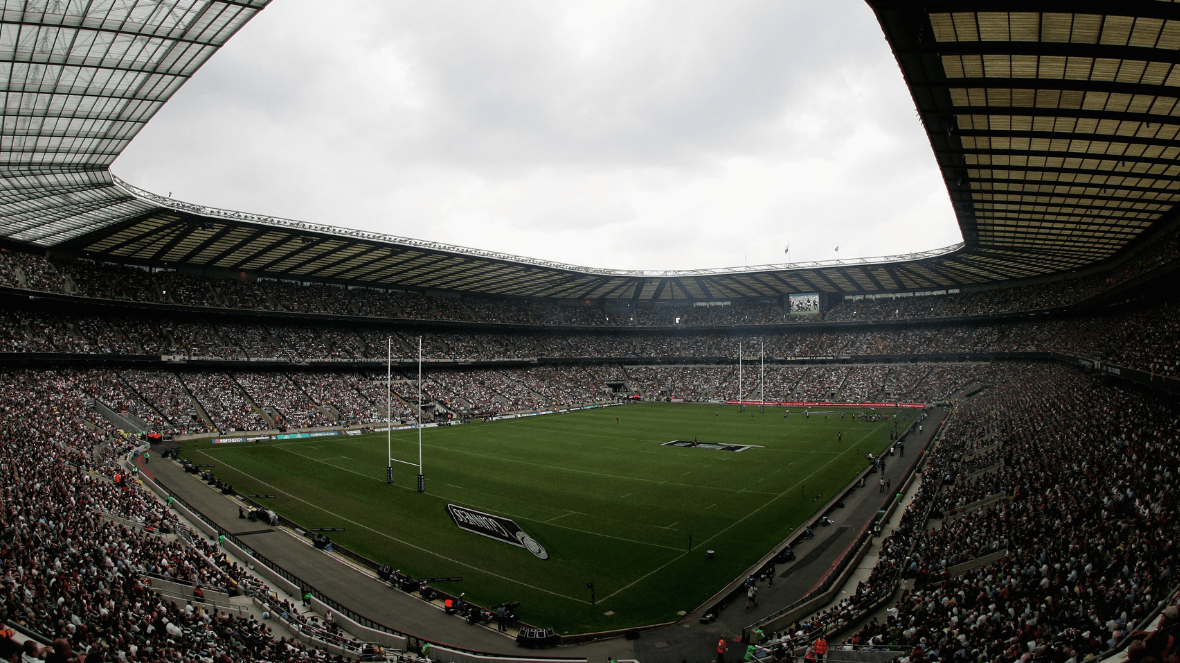 It was a dramatic conclusion to the  end of the regular Gallagher Premiership season. The only thing settled ahead of the final weekend of action, was that Exeter, Saracens and Gloucester were heading to the semi-finals. Of those, Gloucester were the only ones who had locked in a finishing position, which was third place.

That left top spot in the table open for either Exeter or Saracens to secure. It also meant that Northampton and Harlequins were left in a tussle for the fourth and final place in the postseason. It was the Saints who managed to squeeze their way through to join the other three in the semi finals. Now the mentality shifts to high-pressure knockout rugby.

After a long gruelling season, this is where it counts now. There are no more second chances on the path to success for this campaign. It’s all or nothing on the day with the losers from the two matches having to head to the sidelines having fallen one step short of the Premiership Final. Defending champions Saracens are back in the mix, can they keep a firm grip on it? Premiership glory awaits one of the four at Twickenham.

May 25th will see the two semifinals contested back to back so it will be a huge day of top rugby action. While for a long time on Saturday, just who exactly would be lining up against who in the final four was in the realm of the unknown, things were eventually settled.

So the line up is set for this iconic day of Premiership rugby action. Meeting first for a 1.30 pm kick off will be Saracens v Gloucester at Allianz Park, before the Exeter Chiefs play host to Northampton Saints at Sandy Park. That is a 4.30 pm kick off.

The defining moment of the season for Exeter was back on December 22nd. That was when they hosted Saracens at Sandy Park and produced a dominant 31-13 victory. The Chiefs snapped Saracens’ 22-match unbeaten streak of form in all competitions, and the success moved Exeter to the top of the Premiership table. In the context of the title race, that was so important for the Chiefs. It showed the depth of their character having had their eight-match winning streak from the start of the season snapped against Harlequins in their previous match.

Defeat against Saracens, therefore, would have left them facing a big deficit to their title rivals. But Exeter produced when it mattered and that put them in control of their own destiny in the top flight. A reverse at Allianz Park against Saracens in their penultimate game left the title race mathematically open, but Exeter closed the season with a powerful 40-21 home win over Northampton to seal top spot.

England World Cup Watch: Fly Half Henry Slade had a big impact for England during the Six Nations, scoring three tries in the campaign. If he can stand out in helping guide Exeter to a title, that could boost his starting lineup chances in this year’s World Cup. Full back/winger Jack Nowell is another Chief that has to be staking a claim in Japan.

Saracens were crowned the European Champions Cup winners recently, and the Premiership title is in sight once again, too. For the second game running in the Premiership, Saracens fielded a weakened side when they met Worcester on the final day of the season. Sarries started with only two players who had played in their Champions Cup success over Leinster. So they clearly weren’t targeting the very slim chance that they had of finishing top of the Premiership. They instead were looking ahead to the semi-finals and potentially beyond.

After their nine-match winning streak from the start of the season was relinquished to Exeter in December, it sort of spiralled Saracens into some patchy form. They lost five of their final eleven matches of the regular season but the one positive for them was their form at the Allianz Park, which never failed them. It is a 21-match unbeaten streak of form that Saracens are on in all competitions on home soil.

England World Cup watch: Saracens have some of England’s elite, from Owen Farrell to Billy Vunipola. Both Saracens’ end of season hopes and England’s World Cup hopes were boosted by a return from injury by Vunipola in May. Mako Vunipola though has just been ruled out for three months, making him a doubt for the 2019 World Cup. Other key English players include Maro Itoje and George Kruis.

The Cherry & Whites secured a berth in the playoffs with a win in their West Country derby success over Bath in mid-April. Gloucester managed to overturn a 17-point deficit in the match at Kingsholm to secure their place in the top four. So that was a big success for them. It allowed them to take things a little bit easier at the end of the season, in terms of being able to rest and rotate key players. They knew going into the final weekend of the season, for example, they were going to finish third, no matter what.

The run of form that really secured the high finish for Gloucester was six wins in seven games between mid-February and mid-April. In that run of form, they beat Exeter and Saracens in back to back games. So they have produced some telling victories over the course of the season. They should not be short of self-belief heading forward in search of their first Premiership title.

England World Cup Watch: Billy Twelvetrees was the fifth-highest points scorer at the end of the regular Premiership season. They also have Charlie Sharples who finished as the joint-top try scorer in the top flight, with ten touchdowns. His last international appearance was in 2012 though. Danny Cipriani has impressed a lot of people this season for his performances in a Gloucester shirt, but has remained overlooked by the international selectors. Can the Fly Half make a case for himself in the Premiership play-offs?

The Saints looked on course to pull off an upset as they had an early lead on the board at Sandy Park against Exeter on the final day of the season. The Saints had rallied themselves at the perfect time, winning three straight matches to put themselves in contention for a semi-final place. They went into the final day of action holding a 1 point advantage over Harlequins for that final playoff spot.

They went into the mid-way break level at 21-21 knowing that a win there would guarantee that they stayed in fourth place. However, Exeter stepped things up after the break, keeping the Saints off the scoreboard and inflicting a 40-21 defeat on the Saints. That left them sweating on the result involving Harlequins. Quins were trailing by two points against Wasps, but then they had a penalty in the final minute. They went for goal, but James Lang’s attempt fell just short from the halfway line, giving Northampton a reprieve in the semi-final race.

England World Cup Watch: Tom Collins was Northampton's second-highest try scorer in this season’s Premiership. Could he be surprise inclusion in England’s World Cup squad? Saints players who are likely to be heading to Japan include Dylan Hartley (who could return from injury for Northampton’s Premiership semi-final), Courtney Lawes and Tom Wood.

Saracens have such a tremendous record at Allianz Park that this is a tough fixture for the Cherry & Whites. When the two met back in September during the regular season at the Allianz Park, Saracens produced a 38-15 win. But then there was the reverse when the two met at Kingsholm in February. In the last five meetings between the two clubs, it is Gloucester who are 3-2 ahead. However, each of those successes by the Cherry & Whites were on home soil.

The Chiefs have won four of their last five meetings against Northampton. The only win that the Saints have managed to produce in that sequence over Exeter was at home this season. The Saints took a three-point win in that game, back in December. But then Exeter exacted a bit of revenge with their 40-21 success over them at Sandy Park on the last day of the regular season. Exeter have scored at least 30 points in each of their last three at home against the Saints.

Saracens are the reigning Premiership champions having beat Exeter 27-10 twelve months ago. The way that this season’s semi finals are set up, it could a dress rehearsal for a repeat between the two heavyweights. Two of the last three Premiership Finals have been between Saracens and Exeter, Sarries winning both. Saracens are four-time Premiership champions, with Exeter having claimed the title for the first time in 2017 extra time win over Wasps.

Northampton's only title happened in 2014 when they actually toppled Saracens in extra time. That leaves Gloucester being the only one of the four semi-finalists this season, yet to win the title. As for near misses, Gloucester have lost two Finals (2003, 2007) as have Saracens (2010, 2104). Northampton lost the 2013 Final before their success the following year. Exeter have a 100% strike rate from their one previous appearance.

You can book official hospitality for the Gallagher Premiership Final here.