2019 welcomed the dawn of a new era in hospitality at The Championships, Wimbledon with the debut of Rosewater Pavilion; the new restaurant located in the southern apex of the Grounds.

In addition, what was formerly known as The Gatsby Club had been re-branded as The Lawn. The completion of the No.1 Court Project ensured that all guests in The Lawn were guaranteed to see tennis on-court. Furthermore, the new roof now makes sure that tennis can be enjoyed on this court, even with the threat of rain postponing play.

On the court, there were no signs of the big three legendary men’s players signalling the end of their era in the game. Novak Djokovic, Rafael Nadal and Roger Federer all made it to the semi-finals of the singles, with Djokovic serving up a tense final against Federer before taking the title.

The ladies’ singles competition was equally thrilling, with the emergence of 15-year-old American Coco Gauff making an extraordinary run to fourth round, where she was eventually defeated by Romanian Simona Halep, who went on to claim her first Venus Rosewater trophy in the final against Serena Williams.

Guests at both Rosewater Pavilion and The Lawn were treated to one of the most exciting years of tennis in recent memory, while also enjoying a world-class experience away from the atmosphere of Centre Court and No.1 Court. 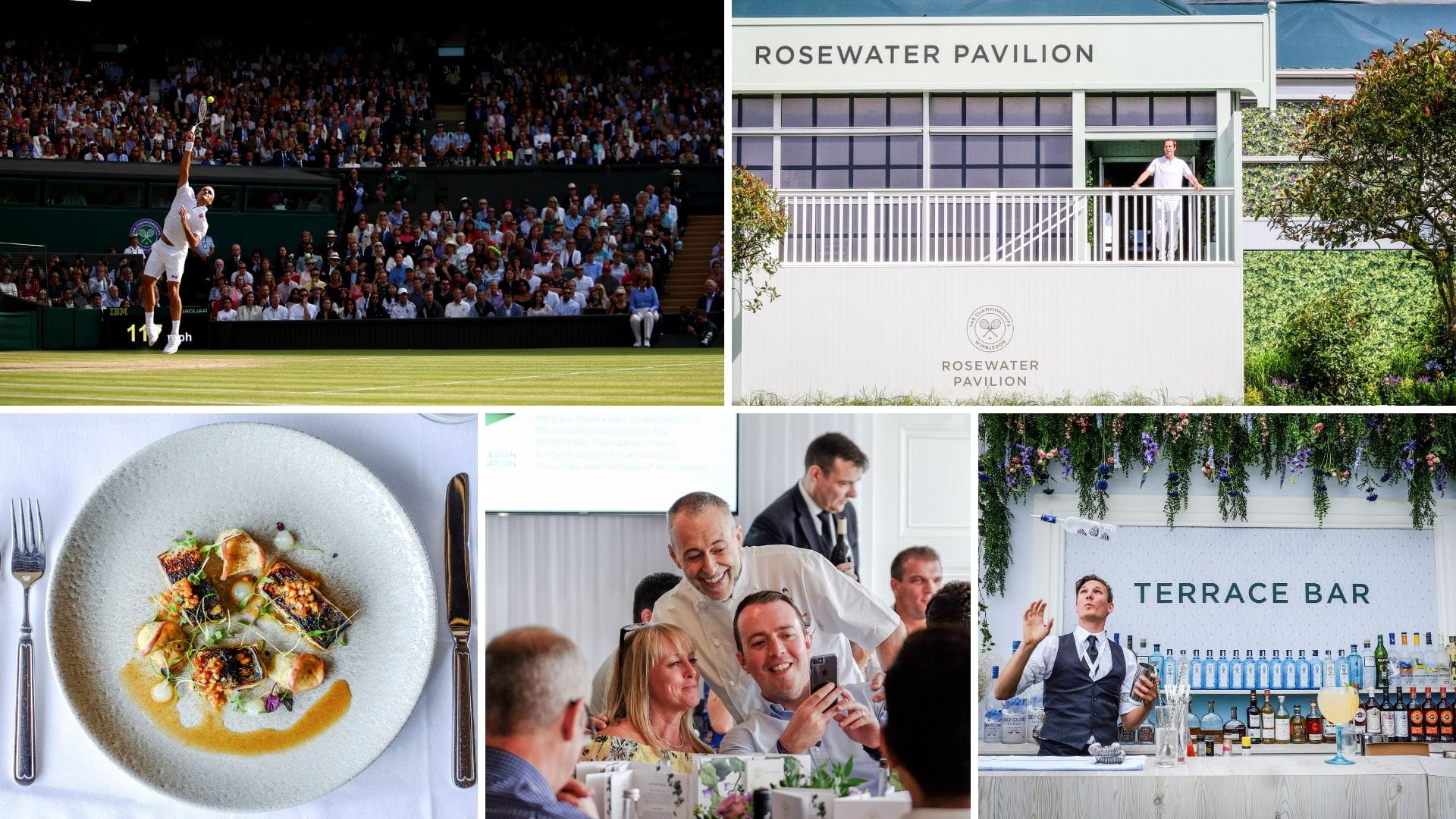 This new structure had been heralded as the first hospitality restaurant within the Grounds at the All-England Lawn Tennis and Croquet Club. Its inspiration was the ‘Best of British’; a blend of beautifully landscaped gardens and floral-inspired décor meant that guests could enjoy tennis in its rightful place of an English garden. Our guests were treated to a British themed four-course à la carte meal; the theme continued as our guests had the opportunity to meet former Wimbledon Ladies' Champion Virginia Wade or former British No.1, Greg Rusedski. Rosewater Pavilion's stunning outdoor terrace provided views towards Centre Court, and it was a pleasure to welcome our guests to this truly-exceptional hospitality experience. 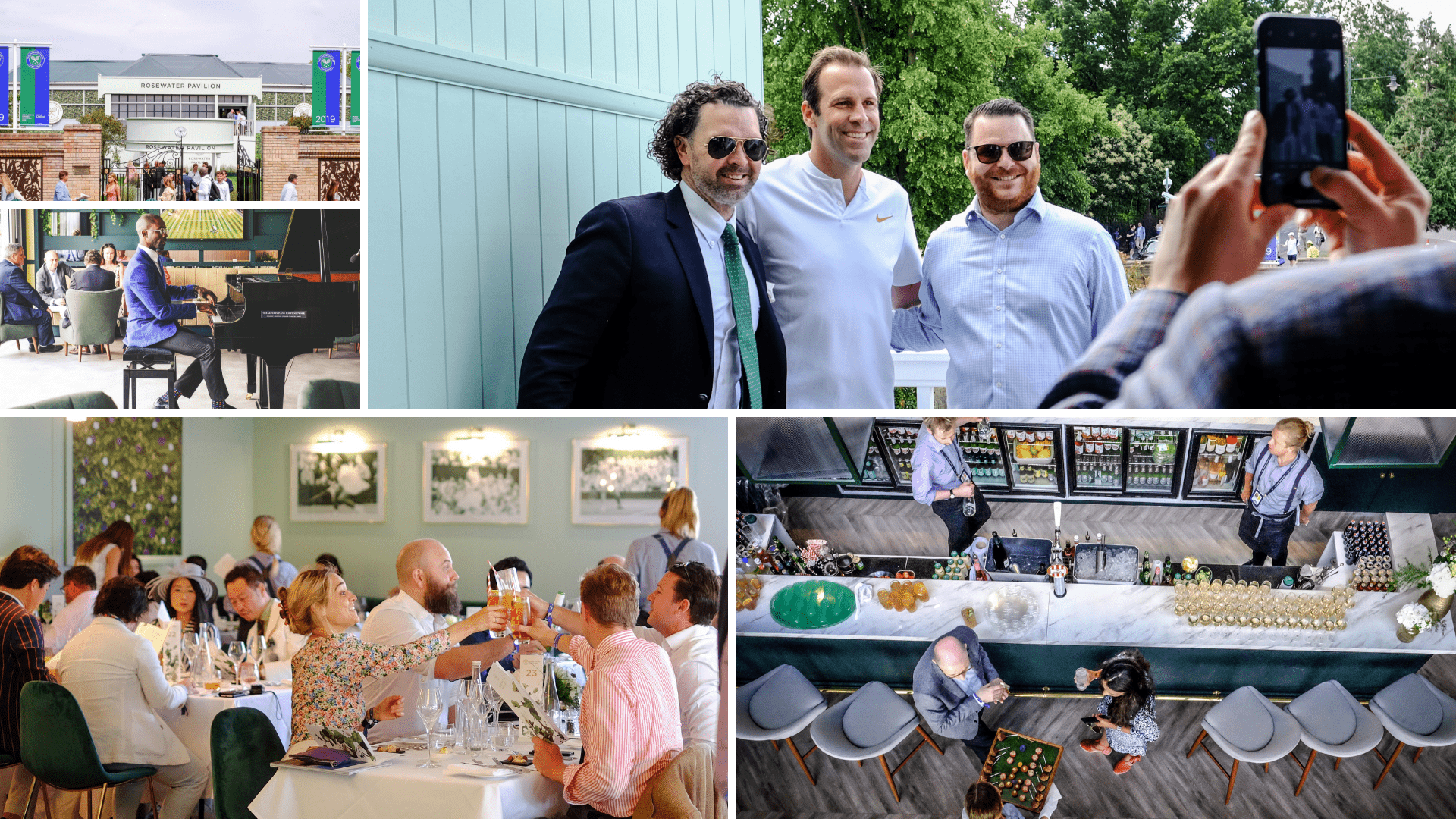 Changes to The Lawn

The Lawn, previously called The Gatsby Club, offered guests an equally unforgettable, first-class experience. The relaxed and contemporary atmosphere was encouraged by features such as live music, bespoke cocktails and the foot stream in its own quintessentially British garden. The memorable experience was guaranteed further with the addition of the à la carte menu designed and served by renowned Michelin-starred chef Albert Roux OBE, alongside son Michel Roux Jr. and granddaughter Emily Roux. 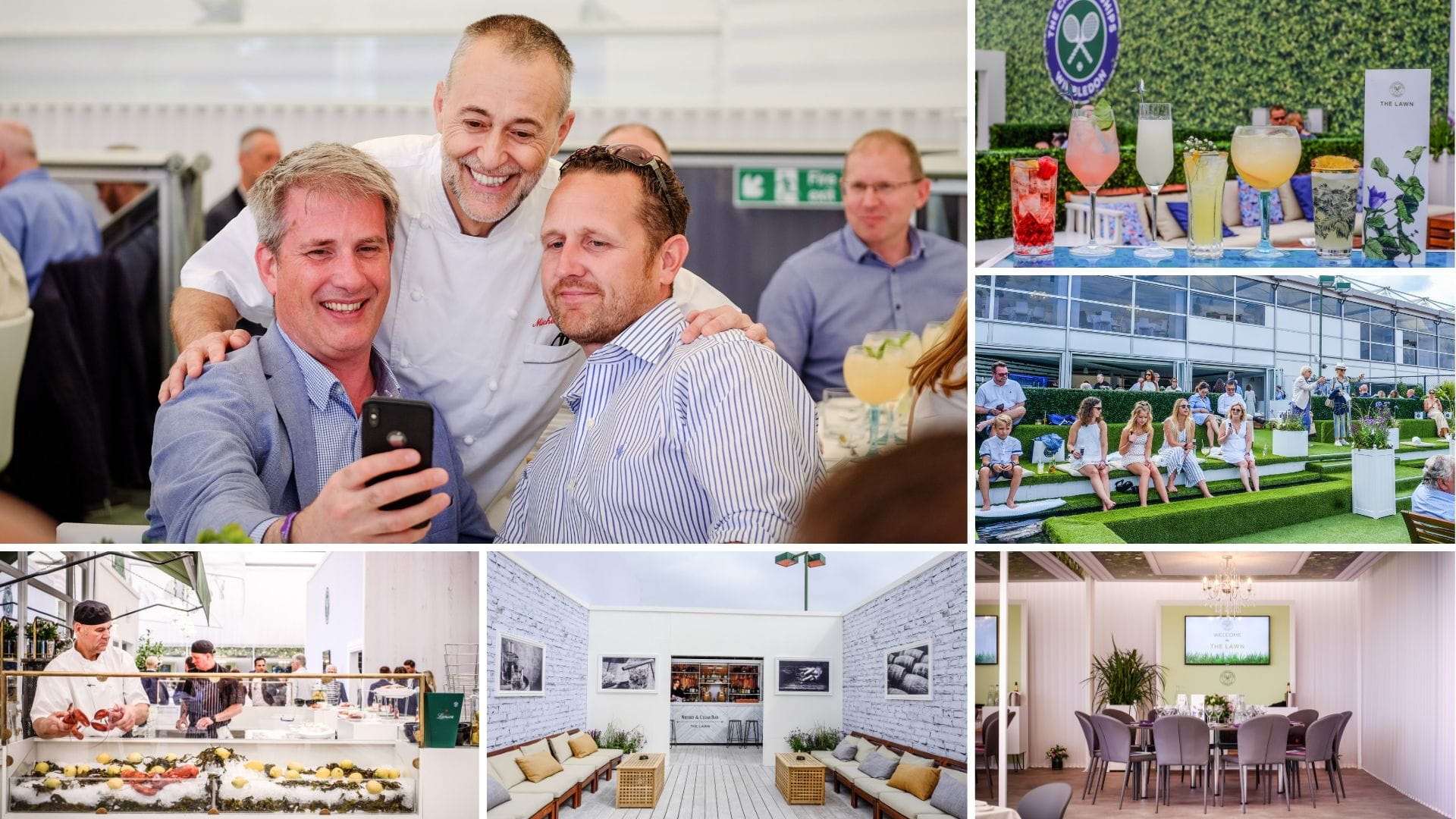 In order to ensure that the hospitality experience at Keith Prowse is the best in its field, we plan every last detail. One aspect that demonstrates the passion and dedication to the experience of our guests is the food preparation. Working alongside the Roux family and award-winning chefs ensures that we deliver menus fit for champions; below shows some of the fine examples of hard work and precision that we demonstrate... 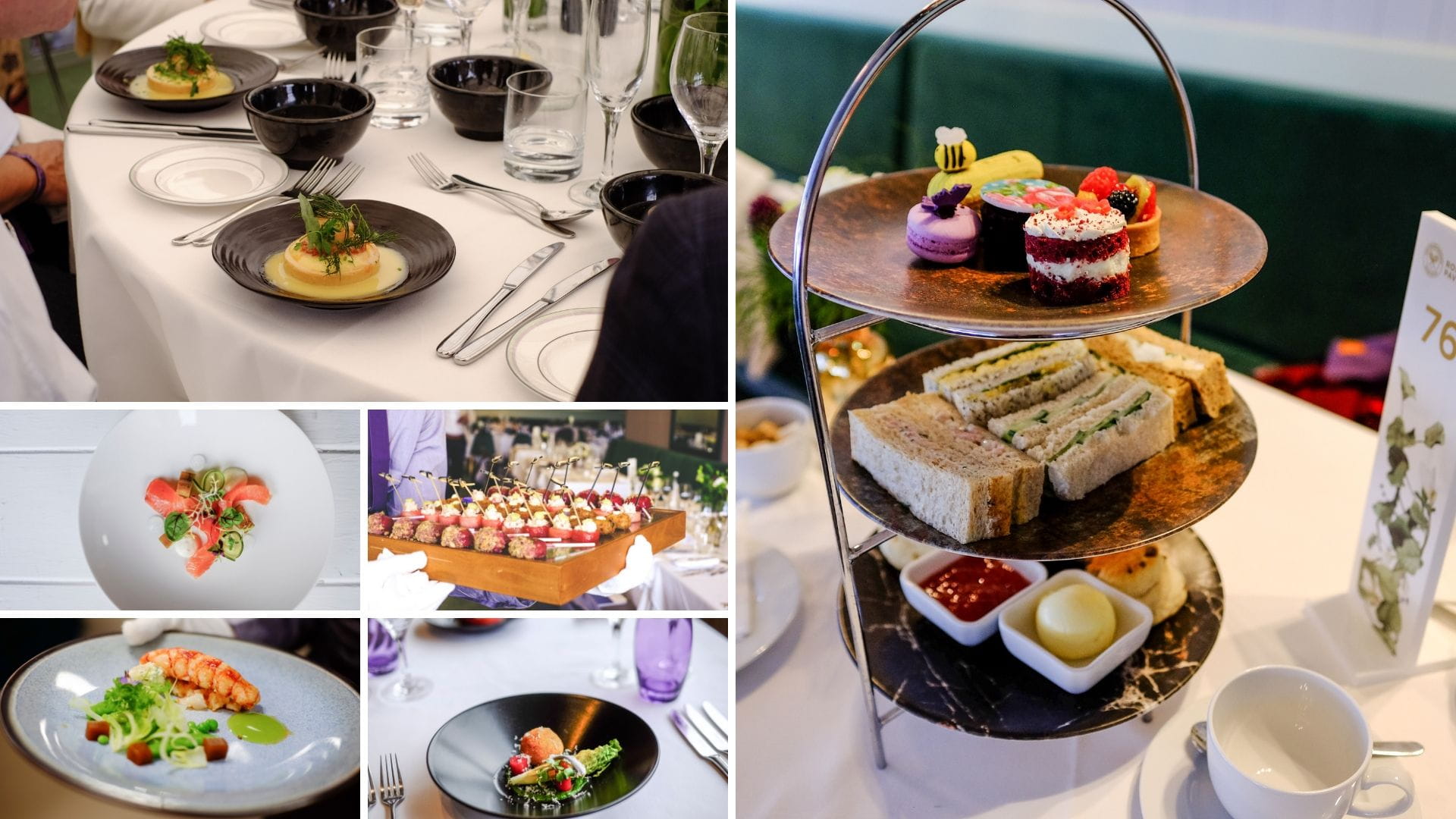 "Simply put ... Fabulous! Hospitality superb; tennis super exciting; seat location A+. Our two days at Wimbledon were memorable. Fond memories to cherish. When my mom walked in to the Rosewater Pavilion and looked West to the Courts she started to cry tears of pure joy!" Jennifer Sloan, guest in Rosewater Pavilion.

"The event went really well, we have received a lot of positive and enthusiastic comments about the private dining room, the hospitality, the organisation, the food and much, much more. Please share our gratitude with the staff. Our guests felt really spoiled and we will never forget their faces when they saw Michel Roux in the room! It was a beautiful day and our CEO asked me to thank you and the staff as well. She gave the thumbs up for next year too!" Martina & Julie, guests in The Lawn Private Dining.

"I just wanted to say a massive thank you for yesterday. We all had the best day! It was so impressive. The service, food, drinks, decor and location were all second to none. It was truly an amazing experience." Caroline, Dennis Publishing, guest in The Lawn.

"You made my day and my guests were just blown away. The new Lawn is just gorgeous and the food unbelievable. Service out of the charts. Your team also managed to get us the Centre Court seats. We were in tennis heaven!! Thanks to you and your team for making this memorable!" Subir, Fi-Tek, guest in The Lawn.

Without doubt, this year's tournament was both thrilling and nerve-jangling. Novak Djokovic became champion after defeating Roger Federer on Centre Court, winning 7-6 (7-5) 1-6 7-6 (7-4) 4-6 13-12 (7-3). The win came to Djokovic after a gruelling yet highly-intense final with the duration of almost five hours, the longest final in history. Djokovic stated that the final was 'one of the most thrilling finals' in his career; 'It's quite unreal,' he said after winning his fifth Wimbledon title.

The women's final saw the swift defeat of Venus Williams made by Simona Halep, leaving the incredulous crowd of Centre Court stunned at the result. Halep kept both her cool and her eyes on the prize throughout the match - her win of 6-2 6-2 demonstrated this further.

Other highlights of the tournament include the stunning semi-final performance from Rafael Nadal against Federer, the first since their remarkable meeting in the 2008 final, and those from fifteen-year old Coco Gauff, who had 'the best week of her life' and rose to rapid stardom due to her Wimbledon run. Despite a straight-sets defeat by Halep in the last 16, Gauff leaves London knowing she has made her mark. 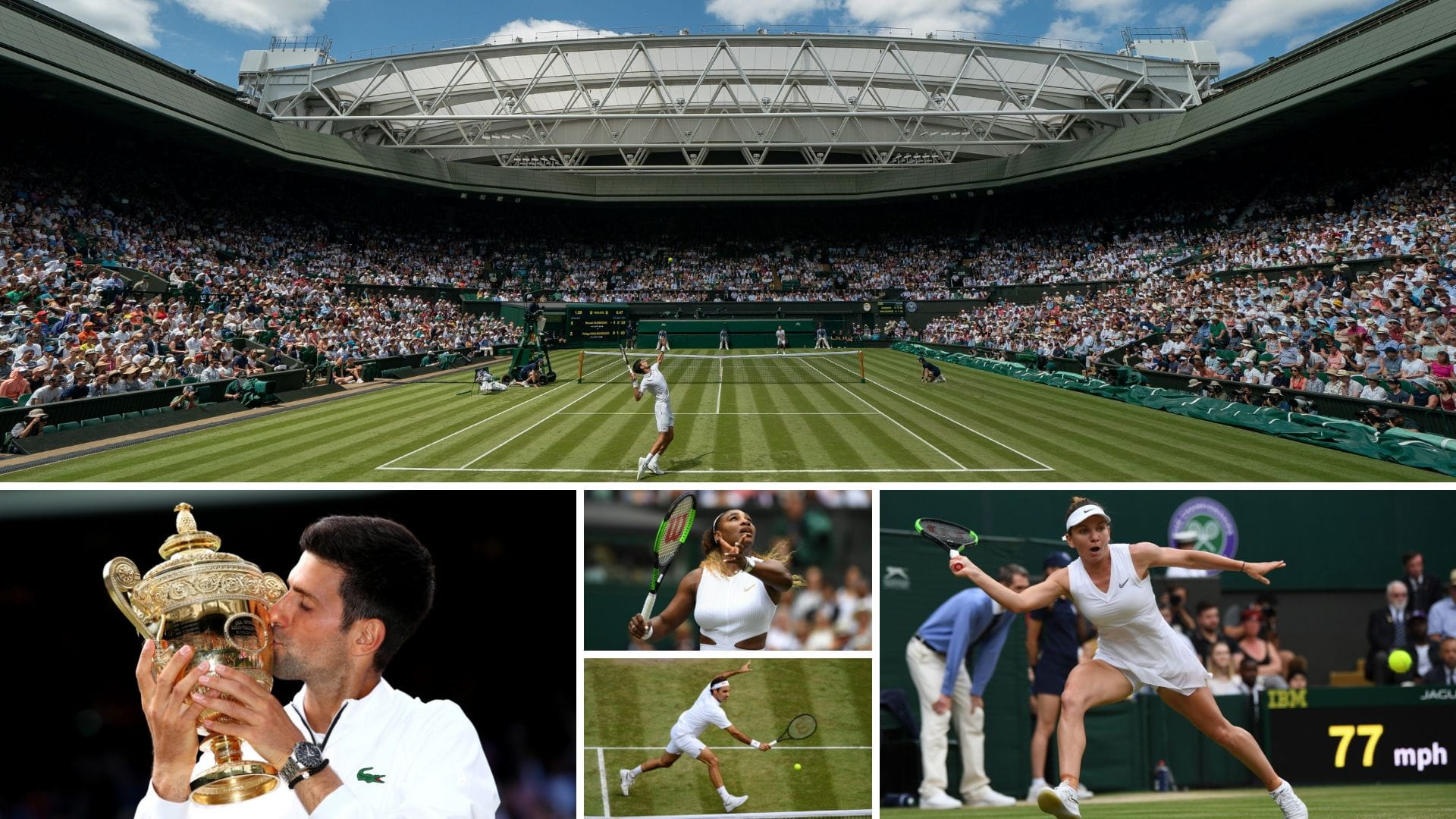 If you're thinking about next year, we are pleased to announce that hospitality at The Championships 2020 is now on sale.