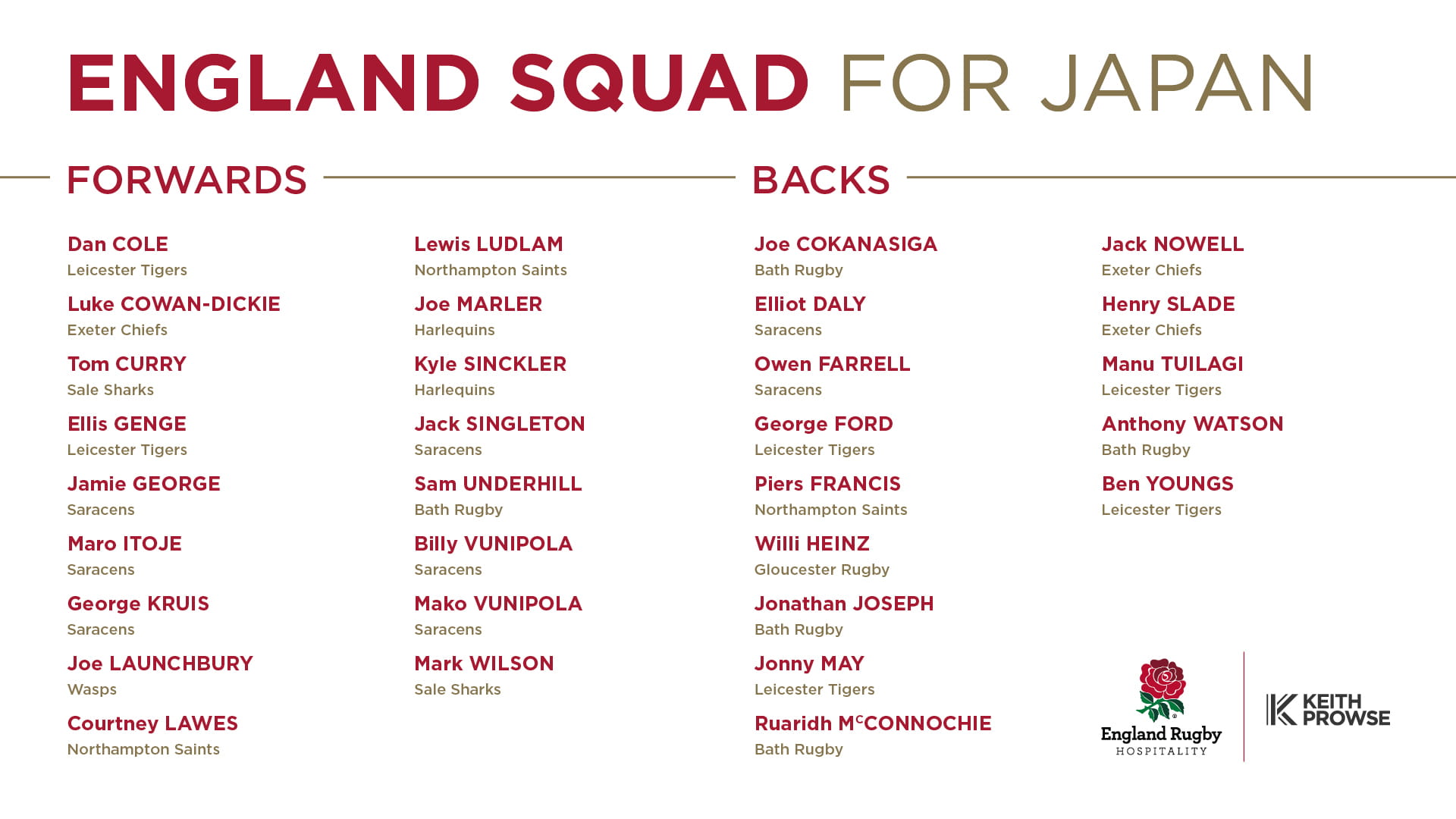 England head coach Eddie Jones is not playing his cards close to his chest ahead of the tournament. Instead, four weeks before the start of the tournament he has made his 31-man squad public. Rather than wait for more of their warm-up matches to be completed, of which they still have three to play, Jones is looking for the potential stability that may come from the players knowing their places.

There is a train of thought that it will at least settle any nerves and allow those who have made the cut to fully focus on the tournament ahead, instead of being caught in two minds over whether or not they were going to be on the plane.

Four years ago the then England head coach Stuart Lancaster named his squad three weeks before the start of the tournament, over which there was a lot of uncertainty who was going to get in. England crashed out on home soil in the first phase. Will a change of plans in team announcement, lead to a change of fortunes for the Red Rose in Japan?


Usually, when Eddie Jones comes up with a tournament squad, you can expect a surprise. Or two. However, the 31 man squad selection hasn’t brought about any seismic shockwaves. Part of the reason for that is most of the squad really had picked itself and there was some clear direction in which Jones was looking through his personnel selections during England's training camps.

Instead of leaving big decisions for later on, Jones made some early. He was clear that he wasn’t going to be having former captain Chris Robshaw or scrum-half Danny Care in his plans. Nor Dylan Hartley whose injury wasn’t going to allow Jones’s first choice captain back into the fold in time for the tournament. Then with the early cut from camp for Gloucester's Danny Cipriani, who was the Premiership’s Player of the Season, there was an inkling that Jones had made his mind up about a lot of things.

There are however, some inexperienced faces in the final 31 that Jones has put together, with Jack Singleton, Willi Heinz, Lewis Ludlam and Piers Francis all getting a ticket to Japan.


The balance that Jones has gone with is 17 forwards and 14 backs. England have to lean on a little extra cover in the front row. Eddie Jones had nine front row players with him in camp in Treviso. All nine will be on the plane. This will be the first time ever an England World Cup squad has had that many front rowers. The reason for that is because England are lacking a prop who can play both loose-head and tight-head.

So they need to carry the extra security of position specialists. They are taking Mako Vunipola, who just a couple of months ago was knocked back with an injury that was expected to keep him out for three months. But he’s such a key player for the English, that’s his fitness is being gambled on. His presence, along with that of George Kruis following doubts, are huge boosts for the England squad.


The rest of the Forwards


This was an area which was never going to throw any real curveballs in terms of selection. England have some huge assets in the rest of the forward positions with the likes of Maro Itoje, Courtney Lawes, Billy Vunipola, George Kruis and Tom Curry offering plenty of strength, mobility and ball-carrying power.

The inclusion of youngster Lewis Ludhlam doesn’t even make for a surprise as he looks as if he’s been playing international rugby for years, despite only making his debut on the weekend in England’s warm up victory over Wales. Joe Launchbury gets the nod as expected, for the depth for the second row.

It means that Brad Shields hasn’t done enough to work his way into the squad, a foot injury cruelly hampering his chances. Otherwise, it is likely that the Wasps loose forward would have been having a big summer.


There is actually a little bit of a surprise in this area. Two scrum-halves it is that Jones is gambling with, maybe because of the need to take the extra front-row player. Knowing for so long that Danny Care wasn’t in the frame, there was mild intrigue as to who Jones was going to turn to as a backup for Ben Youngs in the scrum-half position.

Gloucester’s Willi Heinz probably wasn’t one of the leading candidates six weeks ago. Dan Robson, who was playing second fiddle to Youngs at this year’s Six Nations, was. But 32-year-old Heinz was called up to camp and Jones has seen something he likes.

Maybe it is the steady, calming presence of experience that the former Crusaders player brings. But to have just made his international debut against Wales on August 11th (and named vice-captain too) his inclusion is the fairy tale story of England's squad selection.


As fully expected, Eddie Jones is rolling with his two fly-half stalwarts here. There was never going to be any deviation between the two options of team captain Owen Farrell and his understudy George Ford.


England have included Jack Nowell, despite him not quite being 100% fit. They will be working on him because he is such a special player for England. He is worth sticking in the squad, even if he gets his chance later in the tournament. England have a wonderful blend of pace and power in the backs with the likes of Jonny May, Henry Slade and the absolute selection-certs of Manu Tuilagi, Joe Cokanasiga and Jonathan Joseph.

The one big area of contention was over the inclusion/non-inclusion of Ben Te'o. The centre left Worcester at the end of last season is currently unattached. Despite being leaned on heavily by Jones, the head coach’s patience may have been worn too thin with whatever happened between Te’o and Mike Brown at camp. There was an alleged altercation between the two.

It is Northampton’s Piers Francis who gets the nod, despite not being as big of an impact player as Te’o. Francis did make a good case for himself in England’s opening warm-up match against Wales at Twickenham. Francis can play at both fly-half and inside centre.

The uncapped Rauridh McConnochie has managed to do enough to himself into the squad though. Of the 31 men who are set to represent England in Japan, the winger’s selection is the biggest surprise of all. He has been on Jones’s radar and clearly the Bath youngster, who won an Olympic silver medal in 2016 for rugby sevens is a wildcard. But his is an understandable selection in a way, given the wait on Jack Nowell’s full fitness.


Stepping up in the full-back roles at the World Cup will be Elliot Daly and Anthony Watson. Both are fantastic runners who can break the gain line easily, but opponents will probably be targeting that area as being one of England’s weak spots. It will be interesting to see who gets the nod there, not so much in the opening group games, but in tougher matches against Argentina and France in the group stage.

Mike Brown had some work to do to muscle his way back into contention for a place on the plane to Japan, coming in and out of training camps. An asset that he had going for him was experience. With a relatively young England side, especially in the midfield, that could have been a precious thing. But that alleged training camp alternation with Ben Te'o probably shut the door for him.

Eddie Jones has made his final choice of who to trust to execute his plans in Japan. The early squad selection will give a confidence boost to the players involved and the next step of the journey now becomes about installing belief and building the bonds between the 31 to try and fulfil a country's World Cup dream.

Welcome England back to Twickenham in 2020