For the first time in cricket history 2020 presents a three match one day series between England and Ireland. Two of the game's closest neighbours, but in terms of history, structure, playing numbers and wealth they couldn't be further apart. And a quick look at the ODI results between the sides with one winning eight and the other one, it is easy to see who the big brother is. But once the coin is tossed at each of the three venues, Trent Bridge, Edgbaston and The Kia Oval, there will be no guarantees for England as the boys in green aim to emulate their one glorious success thus far and bring their World Cup winning rivals down to earth with a bump.


Ireland's first official one day international came against England in 2006 and a side that contained one of their own. Former Ireland batsman Ed Joyce, part of a family of five siblings who have all represented Ireland at men's and women's cricket, was making his England debut and opened the batting in Belfast alongside Marcus Trescothick. He only managed 10, but Trescothick's 113 set up a competitive but straightforward 38 run win for England.

It was valuable experience for the side ahead of their debut at the World Cup the following year even though they would arrive at that tournament having never won a match against a Test playing member.

Until Ireland qualified for the 2007 Cricket World Cup in the Caribbean their greatest cricketing moment had actually involved the team from these tropical islands. Back in 1969 the touring West Indies side played two matches against Ireland in between the 2nd and 3rd Tests against England and in the first of these were beaten on 1st innings after being bowled out for just 25, despite containing a young Clive Lloyd in the side. Rumour has it that the Windies players enjoyed the Irish hospitality just a little too much the night before, but of course there is no confirmation of this.

How apt then that the biggest win in Irish cricket's history came in Jamaica when a three wicket victory over Pakistan – their first against a Test playing nation – upset the odds and made them the darlings of the World Cup as they qualified for the second 'Super 8' phase. They had already tied with Zimbabwe a couple of days earlier which many thought would be the pinnacle of their success, but having bowled Pakistan out for 132, thanks to 3-32 from giant farming fast bowler Boyd Rankin, they had the chance to make history.

And all rounder Kevin O'Brien recalls that skipper Trent Johnston made it very clear what the options were between innings. He said: “I remember Trent Johnston’s speech during half-time of the Pakistan game. He just said: ‘Do you want to go back to your day jobs? There’s 132 runs on the board. Let’s stay here for an extra four weeks.’ ”

They stayed and they and their families had a ball, even if they lost six of their next seven matches with a solitary win over Bangladesh to cheer them.


Four years after their first taste of global attention Ireland were thirsty for more of the same and with many of the players returning to the spotlight they were more ready this time to mix it with the big boys, especially with Ed Joyce now back in the fold having been given permission by the ICC to return to Irish colours. In the most backhanded of compliments here had been a change of format for the tournament to with the 'Super 8' stage scrapped in favour of more group games and then a straight quarter final onwards.

It made it much harder for the smaller teams to progress, who couldn't rely on the odd giant killing that accounted for Pakistan and India in the previous tournament. The same mistake would not be made twice. Still...the chance for Ireland to take a scalp or two was all the motivation they needed. And it came courtesy of a pink-haired, big-hitter who took his team from dire straits at 111-5, to an unlikely victory chase of 328 and to top it off, it was against England. The same England who had by now poached Eoin Morgan after Joyce to deny Ireland the two best batsmen of their generations.

On the flattest pitch of them all in Bangalore O'Brien (who should still be doing his thing next summer) unfurled stroke after audacious stroke to put James Anderson, Graeme Swann and Stuart Broad (1,301 Test wickets between them) to the sword in brutal style. As his brother Niall says: “He was grumpy in the field and when he is like that he kinda takes the bull by the horns and he had that look in his eye.” O'Brien brought up the fastest hundred in World Cup history from just 50 balls to leave England humbled and embarrassed on the night.

As it turns out England reached the quarter finals and Ireland didn't, but no-one remembers that. What they remember is the time Ireland gave England a beating on the cricket field and that is why they might just do it again next summer. 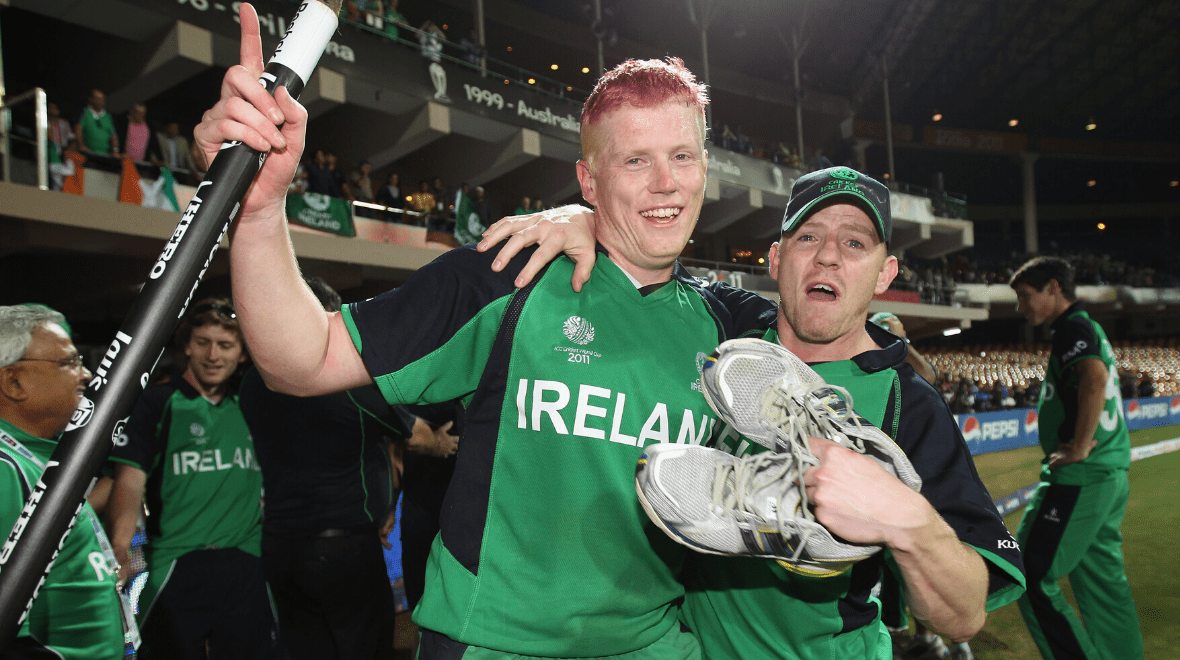 
If it is all the same to you, lets focus a little more on Ireland's performances at the 2015 World Cup shall we, why? Well you see they didn't actually qualify for the 2019 tournament so....er....yeah. But the 2019 tournament will have a big bearing on these three games coming up though, as you will see. By the time the 2015 tournament began, Ireland had established themselves as the pre-eminent associate nation and had been added to the top ODI championship table. They had high hopes of qualifying for the quarter finals which were encouraged only further when they beat the West Indies in their opening game, chasing down 305 to record just the fifth successful chase of 300 or more in a World Cup match. Incredibly they had been responsible for three of those chases.

Paul Stirling's 92 announced him as a destructive batsman of world class potential, while the presence of Joyce was crucial as he made 84 in a famous victory. Wins over the UAE and Zimbabwe followed, leaving Ireland needing just one more win against either India or Pakistan to guarantee their place in the last eight. Neither came, and their tournament finished in crushing mathematical disappointment.

More heartache had arrived with the knowledge that the 2019 World Cup would be reduced to a 10 team tournament from 14 leaving Ireland vulnerable in a qualifying tournament where only the West Indies and Afghanistan advanced. 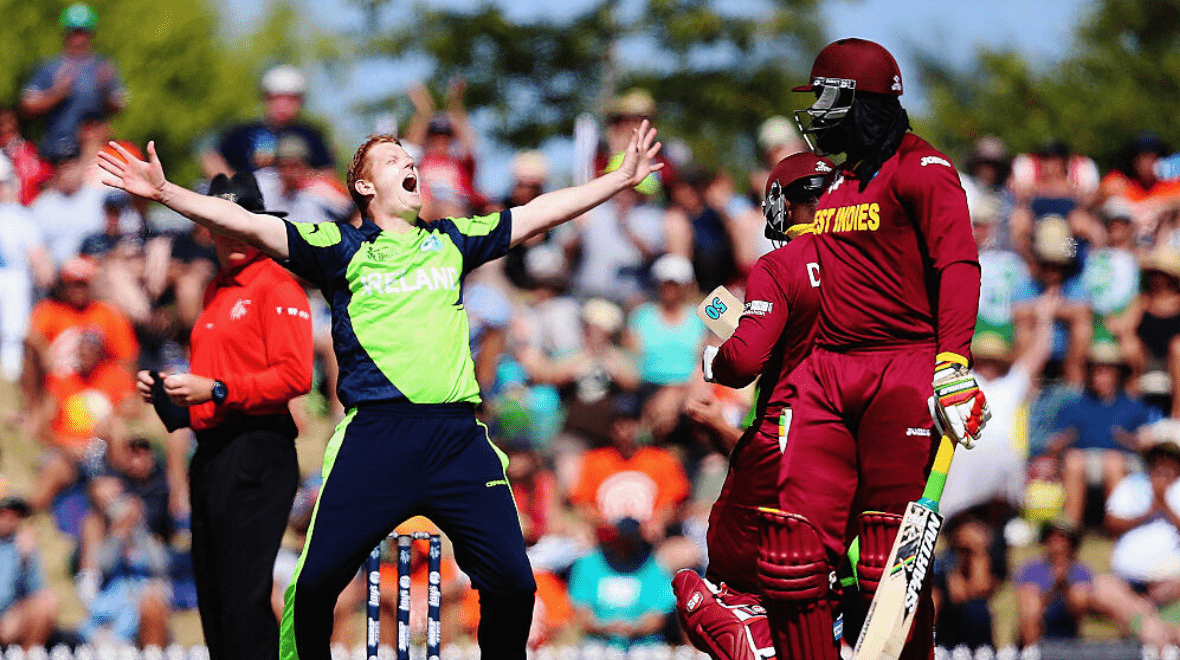 
Despite failing to qualify for the World Cup on English soil in 2019, something that rightly still rankles, Ireland were most certainly represented in the shape of Eoin Morgan, the winning England captain. The irony that it should take a man from Dublin to lift the World Cup for the first time in England's history is not lost on Irish cricket or his former team-mates as described by former skipper Kyle McCallan. “From the day and hour he came in to the Irish set-up, he made it clear that he wanted to be the best player in the world,” he said. “He has been a trailblazer in so many ways. “While he's doing it for England, it's wonderful that someone with a strong Dublin accent is leading the way as a world champion.”

Both Morgan and Rankin managed to play Test cricket for England, while Joyce had to wait for Ireland to be awarded Test status before playing at the highest level. And it is now hoped that the carrot of Test cricket will stop more players from leaving Irish cricket to try and achieve what Morgan has done in his career. What is clear though, is that Irish cricket can produce the very best players in the world and where Morgan has gone many others hope to follow, only now they will do it wearing green, and some may even start by getting one over on Morgan next summer across three ODIs.