For England, 2019 was one of the most iconic years of sport in recent history.

The BBC Sports Personality of the Year awards are the BBC’s way of celebrating the year of sporting excellence, and those who contributed towards that excellence.

Demonstrating sporting individuals who have achieved great amounts throughout the year, the winner is determined by public vote, with the recipient being British or being someone who plays a significant amount of their sport within the UK. With a plethora of stunning sporting moments displayed in 2019, from the Rugby World Cup to the nail-biting final at Wimbledon, it’s hard to pinpoint a sportsperson eligible for the award.

However, one sport stands out from the crowds, and with it the phenomenal year endured by England cricket fans. For the first time since 1981, when Ian Botham’s match-saving performance brought England an odds-defying victory in the third Ashes Test, the golden age of cricket was re-born. Although 2019’s summer of sport was owned by England cricket, without doubt there is one man that contributed a remarkable amount to make this happen. At last, this generation has its own cricketing miracle thanks to Ben Stokes.

It was of course Ben Stokes who won the 65th Sports Personality Award. In a public vote, Formula 1 driver Lewis Hamilton came second, and sprinter Dina Asher-Smith finished in third place. Other notable athletes that were shortlisted were footballer Raheem Sterling, rugby union legend Alun Wyn Jones and world-champion heptathlete Katarina Johnson-Thompson. Whilst also a highlight in Stokes’ career, it was also a highlight for the world of cricket, with Stokes being the first cricketer to win the coveted prize since Freddy (Andrew) Flintoff in 2005. 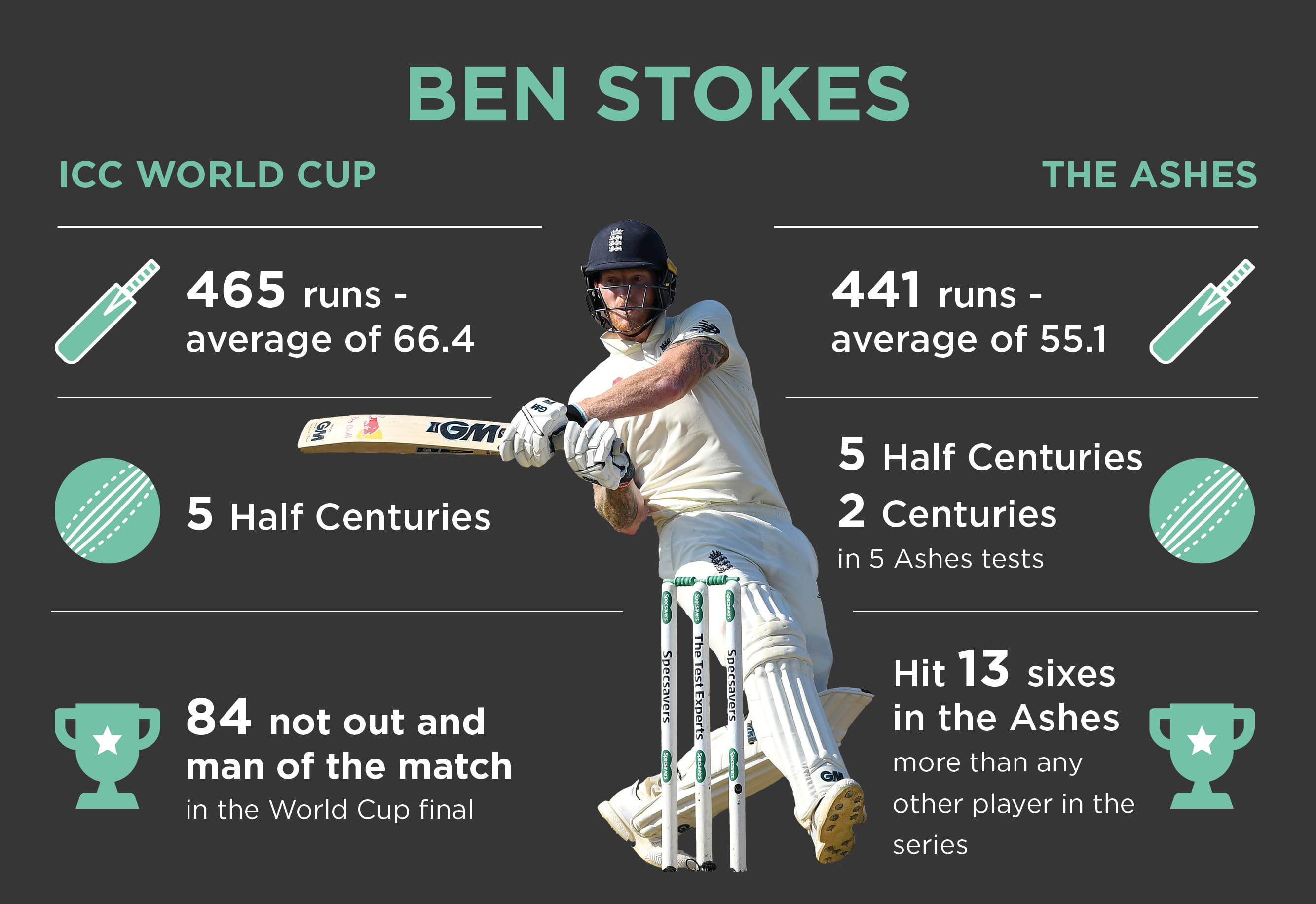 In 2019 there were nearly 100 days of international cricket, from the ODI against Ireland in May, to the impressive Ashes Test series through to September. In July, England beat New Zealand to win the ICC World Cup for the first time. Both sides scored 241 in their 50 overs, leading to a super over where England were crowned champions - beating New Zealand by 1 run. England were all but out of the game at 86-4, however Stokes’ 84 runs combined with his patience and calmness kept England in the game.

When England needed 9 runs from 3 balls, Stokes delivered an outrageous moment of fortune. When diving to stay in and score two runs, Stokes’ bat was struck by the ball, deflecting it and carrying it to the boundary to make it six runs in total. His partnership in the super over with Buttler was the icing on the cake and helped seal the deal for England. The atmosphere electrified and the trophy was lifted.

Stokes went on to play another starring role in a stunning Ashes series at Headingley in the third Test. Having been bowled out for just 67 in their first innings, England began the fourth day needing 203 to win. Jack Leach was England’s last batsman, going in at 286-9 to partner with Stokes. Stokes went on to hit eight sixes and eleven fours in that one innings alone, including an outstanding reverse sweep that went for six from Lyon. At 358-9, England needed 1 more to win. Stokes kept his cool and majestically planted Cummins through the covers, scoring his eleventh four and leading England to an unforgettable victory. The Ashes were certainly kept alive because of this one cricketer.

Stokes can inspire the next generation; being a true all-rounder and icon in the world of cricket and sport, Stokes and his ‘super summer’ will stand out for many generations to come. Both aspiring and current cricket players now have a new hero to look up to. Cricket certainly has a bright and exciting future ahead…

See Ben Stokes, the England squad and other cricket legends in action this summer with events at Edgbaston and The Kia Oval…