The game of cricket has provided us with some of the UK’s biggest sporting legends, many of whom have had the honour of receiving a knighthood. Former England captain Andrew Strauss has now joined the likes of Sir Ian Botham, Sir Alistair Cook and other cricket giants, after being knighted by Prince William at Buckingham Palace.

Sir Andrew Strauss has definitely had his fair share of highlights in his cricketing career, with an impressive amount of stats during his life as a cricketer. His career kickstarted in domestic cricket, where he played for Durham University cricket team, before playing for Middlesex second and first XI teams. Strauss’s first taste of international cricket came when he made the cut for the One Day International squad against Sri Lanka in 2003. 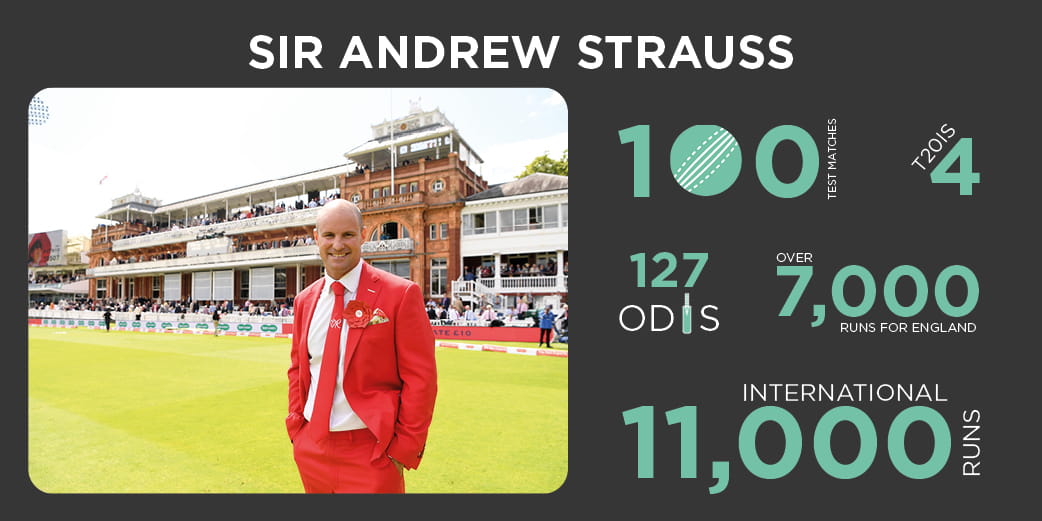 Strauss played 100 Tests for England from 2004-12 and captained the team to two Ashes series wins. In his 127 ODI appearances, he amassed 4205 runs with 6 hundreds, while in 4 T20Is he scored 73 runs. He announced his retirement in August 2012 - his token of appreciation from his teammates was 100 bottles of wine, furnishing him into retirement in style.

In May 2015, Strauss was appointed the role of director of England cricket. Although sacking coach Peter Moores and ruling out the return of Kevin Pietersen dawned upon him imminently, he stepped up to the plate, becoming the most powerful official in the English game as managing director. He was the unseen administrative architect behind England's first World Cup triumph in July 2019. Strauss resigned from this position in October 2018 in order to spend more time with his late wife, Ruth, as she was undergoing treatment. In memory of Ruth, Sir Andrew set up the Ruth Strauss Foundation. On day two of the 2019 Ashes Test at Lord’s, fans wore red in aid of the foundation, raising over half a million pounds.

There is no doubt that Sir Andrew is regarded as an exceptional person, in both his achievements on the cricket field and dedication to the foundation. It is certainly a knighthood that is well deserved and will be celebrated around the cricketing world.