What do French monasteries, rubber and croquet all have in common? They were all components behind the fascinating story of how modern tennis grew to become one of the world’s most popular sports, with Grand Slams such as The Championship, Wimbledon, now covering the globe.

But how did tennis grow to become the global phenomenon that it is now, and where exactly did it all start?

Game of the Hand

The game of tennis is a sporting revelation that is rightly proud of its rich and diverse history, with evidence of its earliest forms originating in the ancient era, even as far back as ancient Greece! However, 11th century France demonstrated most of its origins when monks played a game called name je de paume, 'game of the hand,' where players used their hands to hit a wooden ball over a rope stretched across the courtyard. The evolution of the name ‘tennis’ then came from the French term ‘tenez!’ (take this!) which monks would shout as they served the ball.

Fast forward several hundred years and the game had spread throughout Europe, moving to inside courts, playing with leather balls and a webbed paddle. It wasn’t long after these changes that the 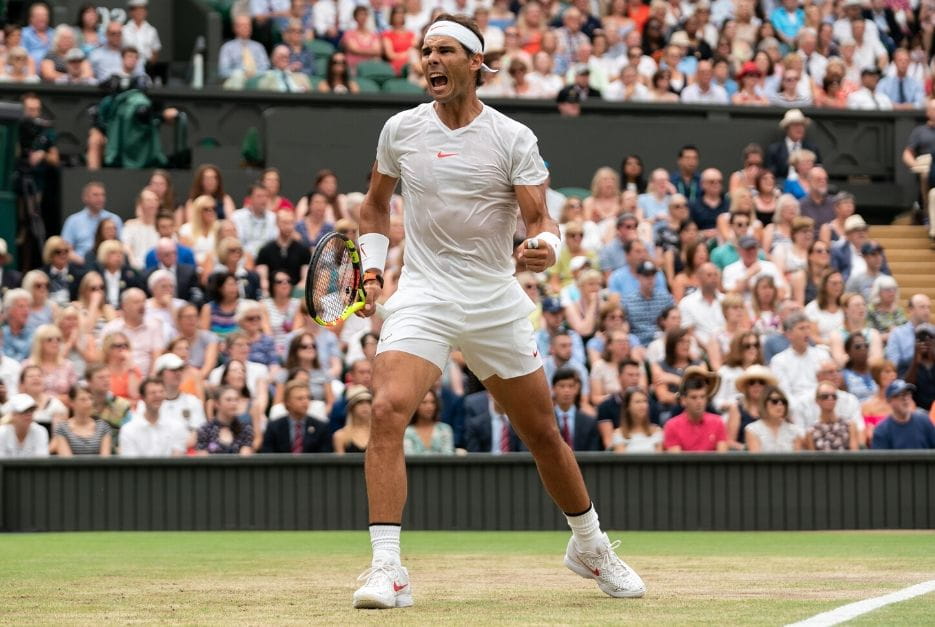 game soon came to England. Courts were built across the country as directed by Henry VII and Henry VIII - the court in Hampton Court Palace still stands today after its construction in 1625.

Whilst indoor tennis continues today in many formats, including “real tennis” which is honoured at the Real Tennis Dedans and Real Tennis Museum at the Queens Club, indoor court tennis in its historic format, was largely abandoned in the 18th century. However, there was a breath of new life for the sport as in 1850, Charles Goodyear invented the use of natural rubber to allow for the creation of bouncier tennis balls, in order for the game to be played on grass courts.

This breakthrough act, along with the creation of outdoor tennis in 1874 by Walter Clopton Wingfield set the foundations of modern tennis. The response to Wingfields version, known as sphairistike, was certainly a good one; the same year, courts showed up in the USA, Russia, India and Canada.

Three years later, the All England Croquet Tennis Club was modified into a tennis court after needing to raise money for new equipment. After rewriting many of Wingfield’s rules, including changing the hourglass-shaped court to a rectangular one, the club held its first tennis championships at Wimbledon. 22 players entered the Men’s Singles, the only event, and the first ever Wimbledon champion was Spencer Gore.

The birth of modern lawn tennis had commenced. Since then, The All England Lawn Tennis and Croquet Club has hosted The Wimbledon Championships every year since, with the exception of 2020, and it’s still one of the most prestigious tennis tournaments in the world to date.

The rules developed by the All England Club in the late 19th century remain largely the same this day. The object of the game is to hit the ball in such a way that the opponent cannot play a legal return. If a player is unable to return the ball, the opponent is awarded a point, amounting to winning the game, set, and eventually, the overall match. The game can be played one-on-one (singles) or two against two (doubles), on a rectangle court divided by a net 3.5 feet high, with tennis racquets and hollow rubber balls.

The end of the 19th century saw the introduction of clay, then hardwood flooring, and, much later, the ‘hard’ courts with concrete or acrylic surfaces which paved the way for the various surfaces we see in today’s Grand Slam tennis tournaments, with hard courts being played upon at the US Open & the Australian Open, whilst clay courts are used at the French Open.

The start of the Open era, its introduction to the Olympics and concepts such as the tie break were all introduced in the 20th century. Furthermore, tennis underwent several major developments, including the concept of the “Grand Slam” in the 1930s, which means winning the four “major” tournaments, namely the Australian Open, the French Open, Wimbledon and the US Open.

Whilst the four Grand Slam championships remain as the pinnacle of the sport, other additions to the game have quickly spread worldwide, including the Fever Tree Championships at the Queen’s Club in London. The Fever Tree Championships, usually played a couple of weeks before Wimbledon, are often considered an important indicator of a player’s form in advance of the championships. The growth of Tennis has also seen several other major international tournaments spread beyond the Grand Slams, such as the ATP Finals between the top players in the world each year, and the Davis Cup which turns this individual sport in to a nation v nation competition.

The racquets were made of wood until the late 1980s; new materials like graphite, titanium and carbon offered less weight and more power. It wasn’t until 1986 when the first yellow tennis ball was used either, at The Championships, Wimbledon.

If our whistle-stop tour of the history of tennis has you wanting more, Keith Prowse are sure to have a tennis hospitality package to suit you. Experience first-class hospitality and get closer to the action at world famous tennis championships, including Wimbledon 2021 and the Fever Tree Championships at the Queens Club.