England will make a big return to the home of England rugby, Twickenham Stadium, this November, for the Autumn internationals. After an inconsistent year of sport due to the ongoing pandemic, and a debatable performance at the Guinness Six Nations earlier in the year, Eddie Jones’ side will look to come back strong and sign the year off with a performance to remember.

So, clear your diaries and set your reminders for 20 November 2021 – it’s going to be big. But for all you eager beavers out there, here’s a quick recap on the previous Red and Whites/Springboks meeting, some key players to watch and all you need to be ‘in-the-know’ for the big meet…

Whilst cricket is typically at the forefront of reflections in UK-South African sporting showdowns, this rivalry has a history of 115 years in rugby union. South Africa first played England at Crystal Palace, London, in 1906, which ended in a 3-3 tie. South Africa’s first tour of the British Isles was successful, where their only loss was to Scotland.

Although the next host of meetings would be played at the home of England Rugby, Twickenham Stadium, England certainly took their time in claiming a victory over the Springboks – they weren’t able to do so until their sixth meet, in 1969.

Three years later, what was then John Elders’ side toured the Republic of South Africa and won their first test at Ellis Park, beating the home side 18-9. South Africa put this victory to rest when England returned in 1984; England suffered their worst defeat at the hands of the Boks, losing 33-15 in Port Elizabeth and 35-9 at Ellis Park.

Fast forward a decade, England returned to the southern hemisphere, where they played a pretty levelled series, with a win for each side. South Africa’s victory would come after England’s here, which put them in a bid to win 18 Tests in a row. However, Christmas did not come early for the boks; the Red and Whites denied South Africa of beating the record for most successive Test wins after defeating them 13-7 at Twickenham, in December 1998. South Africa would have to settle for only a share of rugby union history.

Of course, we can’t forget to mention South Africa’s, or more specifically, Janine de Beer’s incredible performance in the 1999 World Cup Final. Whilst it was a match to forget for England fans, de Beer dominated the pitch with five tremendous drop goals, setting the world record for field-scored goals in a Test match. Their 44-21 triumph added another win to their victory scorecard against the Roses.

2021’s Autumn Internationals will provide rugby fans with the eleventh version of England vs South Africa. England have won six of these matches, including the narrow 12-11 victory for the Red and Whites at Twickenham in 2018. However, the win sparked controversy, with Owen Farrell escaping a sanction by the skin of his teeth due to a dangerous “tackle” that wiped out Matt Giteau.

2021’s version of England v South Africa will be the first since the iconic 2019 Rugby World Cup Final. Despite the Springboks lifting the trophy after their 32-12 victory, Eddie Jones’ side will certainly look to put this well and truly behind them.

South Africa took the William Web Ellis trophy back to the southern hemisphere for the third time, after outclassing and overpowering England in the final at Yokohama’s International Stadium, Japan. Whilst the Roses put on a very fine show over in Japan, English hearts were broken at the final hurdle, with what was a chastening end to a campaign that had promised to end the 16-year wait for World Cup glory again.

Eddie Jones and his side will be back with a vengeance, as they look for a home win that will put the boks’ 2019 victory to bed. 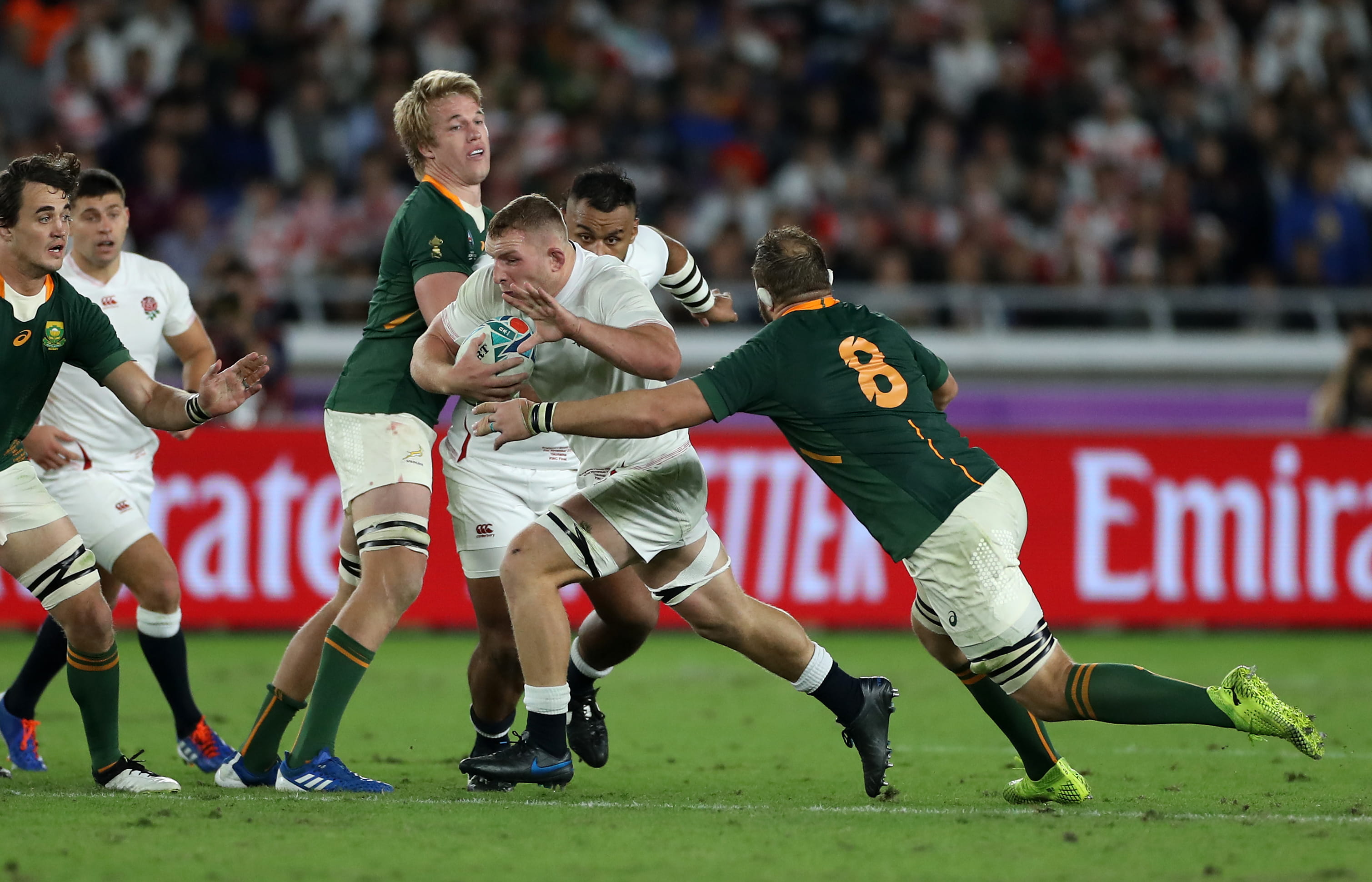 England: England have a lot of game to prove this year. After a debatable performance at the Guinness Six Nations in March, the Red and Whites must put out their best team to go up against the current World No.1’s.

Let’s start with perhaps the heartbeat of the Red Rose pack, forward Maro Itoje. Arguably the best lock in world rugby right now, he looks to handle the brunt of the Springboks’ forward line a little better than in 2019. At only 26, the Saracens player has so much international and domestic rugby ahead of him. He’s tactical and almost impossible to wriggle out of in a tackle; Itoje is a danger to the boks.

Another shining light for England is Anthony Watson. Watson scored three tries in the Guinness Six Nations, including one against England’s 23-20 victory over France. The winger bagged Player of the Match against Les Bleus too, making it a very special 50th Test appearance. His arsenal is made up of side-steps and shimmies, fuelling the hunger to find a breakthrough for England. Watson certainly looks to continue demonstrating his passion and ruthlessness for the game this year.

South Africa: Despite ending 2019 on a high, South Africa are the only tier one nation to not have played test rugby in 2020.

Springboks and Blue Bulls star Duane Vermeulen is definitely one to watch in the Autumns. The 34-year-old No.8 dominated the 2020 SA Rugby Awards, after being named Rugby Player of the Year for the second time and leading the Bulls to win almost every other category as they were crowned champions of the Currie Cup and Super Rugby Unlocked.

Vermeulen was not only instrumental for the Blues in the 2020 season, but his certainly considered to be one of the key reasons why the men in green took home the 2019 World Cup trophy. He made a number of vital contributions, including 10 carries, making 49 metres and two turnovers. His desire for excellence makes him unstoppable – the Roses need to watch out.

Of course, what’s a Springboks’ player focus without mentioning grand master of the side-step, Cheslin Kolbe. Even with a year out of international play due to coronavirus, this Springbok can still be one of the best rugby players on the planet. The 27-year-old is a master of magic on the pitch, as he always performs a perfect mix of balance and vision to overcome practically anyone in his way. What’s more, he scored in the 2019 World Cup final and will look to do the same against England this year. Kolbe’s ability to turn a game in an instant makes him both unstoppable and fascinating to watch.

To date, it is the Springboks who have the most victories out of the two sides; South Africa boast a very respective 26 wins over England’s 15, including two drawn matches. England certainly have a way to go to come out on top. However, out of 21 matches played in England, the Roses have won ten – could it be this year’s Autumn international that balances the pendulum of victories to match South Africa’s 11?

Find out more about official hospitality at the Autumn internationals.