The 2021 US Open served up intense battles, rising future stars and a new chapter written in the history books.

2021 was the first year since the 1997 Australian Open that a major tennis tournament did not feature one of the following athletes in the singles draw; Rafael Nadal, Roger Federer and Serena Williams. Despite the absence of these tennis legends, there certainly was no absence of talent, dedication, passion and drama on court at this year’s US Open.

The two US Open reigning champions failed to hold onto their title, as Dominic Thiem withdrew due to a wrist injury and Naomi Osaka lost in the third round to up and coming 19-year-old Leylah Fernandez. Andy Murray’s journey was also cut short when he was defeated by 3rd seed Stefanos Tsitsipas in the first round despite putting up a great fight in the five-hour match. Wimbledon 2021 defending women’s champion, Ashleigh Barty, was defeated in the third round by the unseeded Shelby Rogers, ending her tournament sooner than she had hoped. 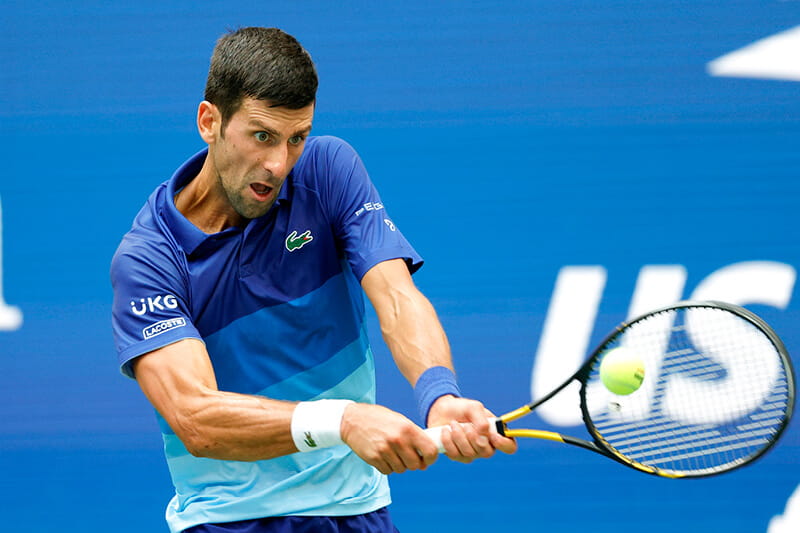 Coming off the back of winning the gentlemen’s title at The Championships, Wimbledon 2021, Djokovic was hoping to reach the greatest achievement of his career – completing the calendar-year Golden Slam. Having won the Australian Open, the French Open and Wimbledon in 2021, there was tremendous pressure on the 34-year-old Serbian to perform and achieve such an incredible title. Winning the US Open title in New York would make him the first man to complete a clean sweep of the Grand Slam singles titles since Rod Laver in 1969.

After being tested in the first round by Holger Rune and receiving a mighty scare against 20-year-old wildcard from California, Djokovic was determined to move forward and soared through to the quarter-finals where he faced his Wimbledon 2021 final opponent, Matteo Berrettini. After beating the Italian, he faced No.4 Alexander Zverev in the semi-finals, a player he was defeated by in the Tokyo 2020 Olympic Games. Djokovic claimed his revenge and charged with momentum into the finals - the last step to take himself closer to achieving the Golden Slam. 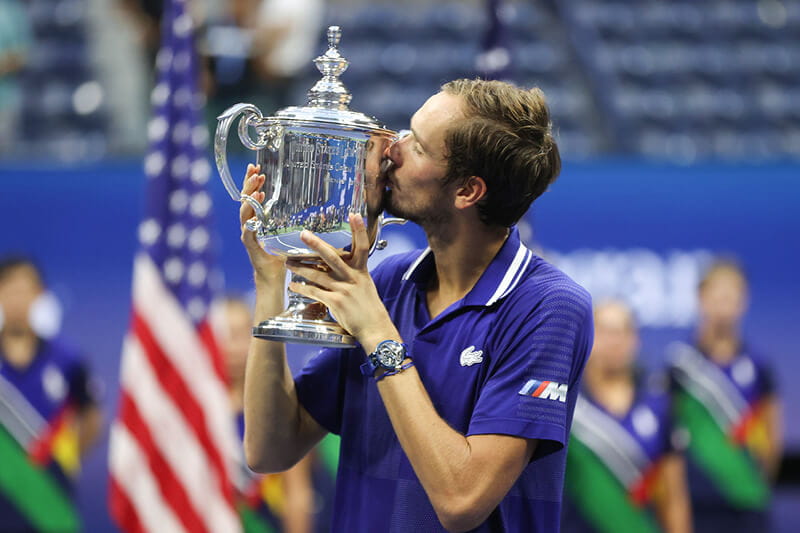 The men’s final at the US Open saw world No.1 come up against No.2 Daniil Medvedev. The stakes were high for Novak who came so close to a Golden Slam, but it was not enough to defeat Medvedev who took the title in three straight sets.

While Djokovic was understandably heartbroken not to achieve the title, he said in his post-match interview that he was filled with joy and was the “happiest man alive” after he received a standing ovation from the crowd in the third set. Head in towel, shoulders shaking and tears streaming down his face, Djokovic was overwhelmed with emotion in such a poignant moment in one of the most important matches of his career - but it just wasn’t meant to be for the world No.1. Medvedev went on to claim his first Grand Slam title, beating one of the greatest players of all time. 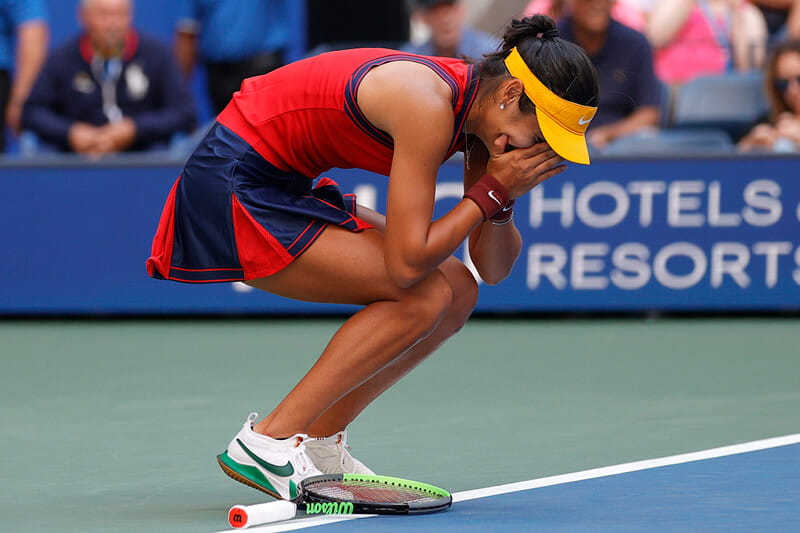 A Historic Moment for Women’s Tennis

One player who made history at the US Open was the British 18-year-old and Wimbledon wildcard Emma Raducanu. In only her second Grand Slam appearance, Emma stormed through the first four rounds of the tournament without losing a single set to reach the quarter finals where she faced Belinda Bencic, Tokyo 2021 Olympic champion. After such a dominant straight set win, Raducanu started to turn heads all around the world as she progressed through to the semi-finals to continue her fairy-tale in New York. At that moment in time, Emma became the first ever qualifier in US Open history to reach the semi-finals, the first British woman to reach a Grand Slam semi since 1983 and the youngest Brit to reach a Grand Slam semi-final for 46 years. She admitted that she did not expect to come this far and had booked her flights home for the end of the qualifying stage! Raducanu said she had been focusing one day at a time and did not focus on chasing records or matches ahead of the next. Defeating Maria Sakkari in straight sets, she took her winning streak further to take her into the final of the US Open, making her the first British woman to reach a Grand Slam final since 1977 when Virginia Wade won Wimbledon. Rising star Raducanu only finished her A-Levels two months before Wimbledon where she was ranked outside of the top 350 players and has now found herself breezing her way through to the finals of a major tournament, making her the first ever qualifier in history to reach a Grand Slam final.

The highly anticipated women’s final at the US Open was something that no tennis fan could have predicted. Two young, unseeded, up and coming tennis players coming head-to-head in a historic, tense and extraordinary battle. Emma Raducanu and 19-year-old Canadian Leylah Fernandez, were inexperienced with major Grand Slam tournaments. However, their confidence disguised any signs of nerves and self-doubt, with both teenagers playing bold, powerful and mature tennis in what was undoubtedly the biggest match in their professional tennis careers so far. 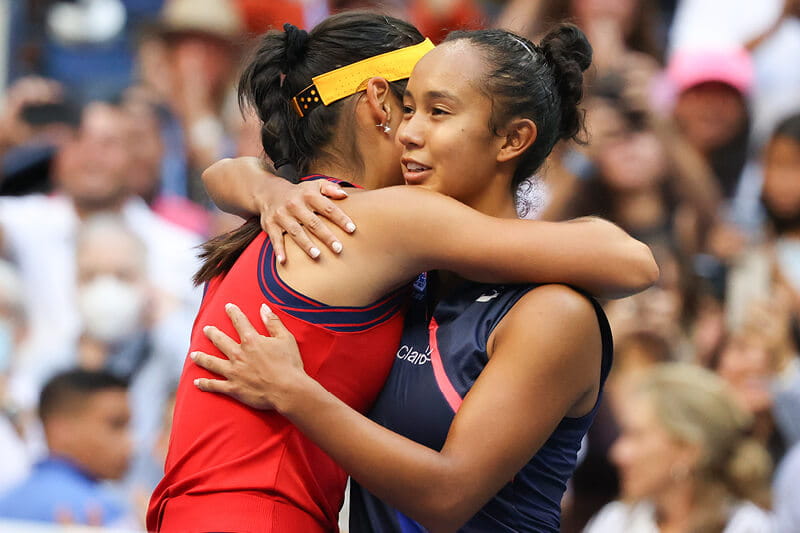 The all-teenager women’s final was historic, tense and most of all extraordinary. The two teenagers produced some of the most beautiful tennis, hitting the ball hard in the right places to generate some tough, nail-biting rallies and roaring cheers from the crowd. There was no stopping Raducanu who had an edge against the Canadian and rose to victory, continuing her dream and claiming the 2021 US Open championship title in straight sets 6-4, 6-3. Emma has been an inspiration to many in this tournament and has made her country proud - this is only the beginning for Emma and what a way to kick it off.

With the US Open coming to an end, all eyes are on Grand Slam tennis in 2022, with many keeping a close eye on Emma Raducanu. There’s no doubt she will be hoping to return to the grass courts of Wimbledon next year, spurred on by her recent success, and tickets for women’s tennis at The Championships will be in high demand. While we can’t guarantee a British ladies’ champion in 2022, you can guarantee you’ll be there to see the women battle it out in some nail-biting matches by booking official hospitality. Tickets will be selling fast as everyone hopes to see Emma make yet more moments in history, so book online now.