From sitting her A-Levels in her school exam hall at the start of summer to playing on Centre Court as a Wimbledon wildcard in July to becoming the 2021 US Open Women’s Champion, Emma Raducanu has aced the past couple of months and to top it all off, she has now become the British women’s No.1 seed.

Raducanu was an unknown name at the start of Wimbledon 2021 and has now become one of the hottest household topics globally in such a short space of time. Emma has won the hearts of many with her infectious smile, kind-hearted nature and mature composure, reigniting faith back into British women’s tennis and flaring inspiration amongst the next generation.

Everyone has been talking about Emma since her historic win at the US Open where she became the first ever qualifier in history to reach a Grand Slam final, let alone claim the highly sought-after title. 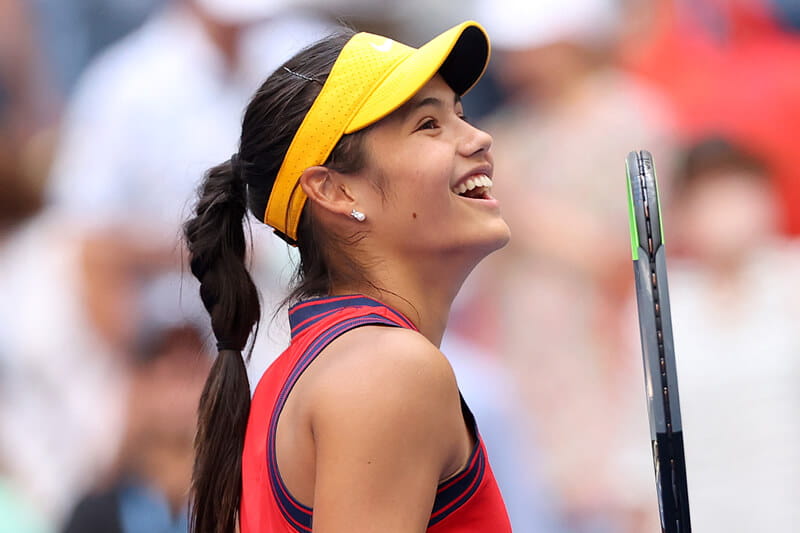 So, Who is Emma Raducanu?

Emma was born in Toronto in 2002 to a Chinese mother and Romanian father and moved to England when she was only 2 years old. Growing up in Bromley, Kent, Raducanu started regularly playing at her local tennis centre at age six where she fell in love with the sport. Emma was soon competing in local and regional LTA competitions across the south of England where she picked up a number of trophies for her hard work, followed by her first national junior title at age 9. She went on to play her Junior Grand Slam debut in the girls’ singles at Wimbledon in 2016 before joining the LTA’S Pro-Scholarship Programme, the highest level of support offered to developing players by the LTA.

Fast forward a couple of years, Emma found herself making her women’s singles Grand Slam debut as a Wimbledon wildcard in 2021. She stormed her way through her first few matches to reach the fourth round of The Championships where she took centre stage on the one and only Centre Court – a court with such heritage and history that every tennis player dreams of playing on. Her next opponent was Australian Ajla Tomljanovic, 50th in the singles rankings. The first set was tight, with the two women battling it out to claim the first set of the match. Emma was able to take advantage of opportunities to break the Australian where possible, but it wasn’t enough to win crucial points when it mattered most at set point to Tomljanovic. Raducanu started to struggle with breathing issues during the intense and pressure-filled match when a medical timeout was called, and sadly decided to withdraw as she felt she could not go on. Reaching such an advanced stage in a major tournament competing as a wildcard made Emma the youngest British woman to progress to the last 16 of The Championships in the Open Era – giving her a sweet taste of what it feels like to make history. 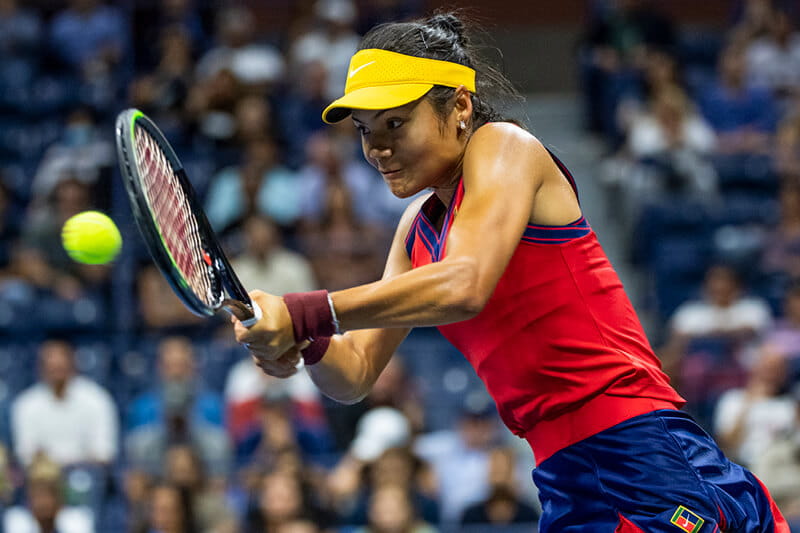 The Greatest Victory for British Tennis

Emma’s motivation and momentum remained strong as she carried herself on to compete in the 2021 US Open in New York. Storming through each and every match, Emma found herself in the quarter finals, then amazingly the semis, and to both her and the public’s surprise, the final.

Emma’s journey at the US Open has been inspirational to say the least. Not only is she a remarkable tennis player to watch, producing powerful shots and accurate serves, she’s confident, composed and mature enabling her to carry herself through even the toughest of situations on court.

The nail-biting match saw top-level tennis, with fiery forehands, bounding backhands and strong serves. The 18-year-old did not appear to be flustered, panicked or angered at any point during her match against fellow teen, Leylah Fernandez, especially when she saw two Championship points come and go at such a crucial stage in the match and in her tennis career. Carried through till the very end by her mental toughness and much needed self-belief, Emma brought the match to a close by serving a beautiful ace before throwing herself to the floor with her head in her hands in both disbelief and amazement of what she had just so miraculously achieved – finally being able to breathe a sigh of relief.

Not dropping a single set throughout the duration of the tournament, Emma fought to the very end to make her mark and turn her wildest childhood dream into a reality. If gaining outstanding A Level results wasn’t enough, Emma can now say she is the first ever qualifier in history to reach a Grand Slam final, fighting through the tournament to claim the US Open Women’s Championship title. Emma is flying out of New York as the new British No.1 and world No.23, and not to mention £1.8 million pounds better off!

In her post-match interview Emma said: “It’s an absolute dream, you just have visions of yourself going up to the box, hugging everyone, celebrating. For that moment to actually happen, I’m just so grateful.”

Emma experienced a true sporting fairy-tale in New York and has become a sporting sensation after an unbelievable yet believable performance – what a year she is having! 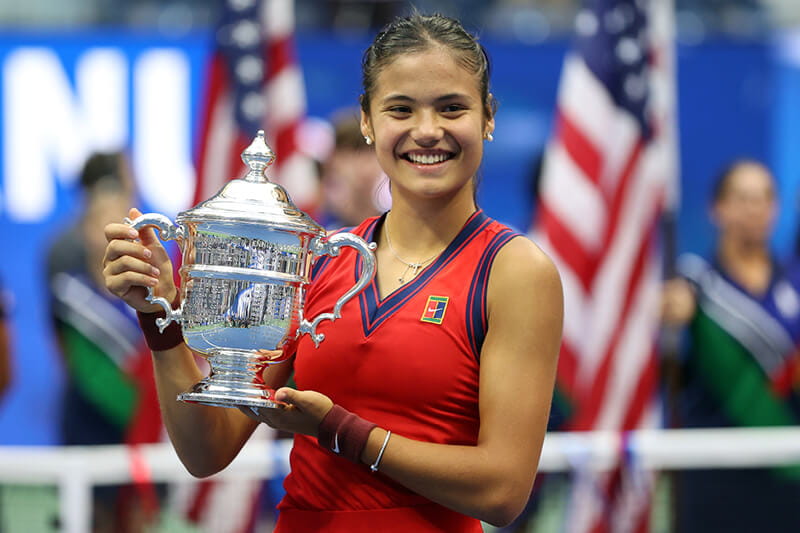 As for the British star’s future, there is no doubt that this is just the beginning of an exciting and successful career ahead of her and that the US Open Championship title is the first of many. In her post-match interview after her victory, Emma said she is taking the future in her stride and has said she is going to soak everything up and live in the moment before looking ahead to what the next Grand Slam holds: “I definitely think it’s the time to just switch off from any future thoughts or any plans, any schedule. I’ve got absolutely no clue. Right now, no care in the world, I’m just loving life.” We’re excited to see what's in store for her going into 2022, particularly at the next Grand Slam in Australia in January, and like many we can’t wait to watch her take to the court once again.

We’re hoping to see Emma return to the grass courts of Wimbledon in 2022 to battle it out for the trophy on her home turf. The only way to guarantee a place to see the world’s greatest women at Wimbledon is by booking hospitality - click here to learn more and secure your No.1 Court or Centre Court tickets.

To find out more about the 2021 US Open and Emma’s terrific performance, read our latest blog ‘US Open 2021 Review’.

Sign up to our newsletter here to find out more about the latest tennis news, announcements and experiences.