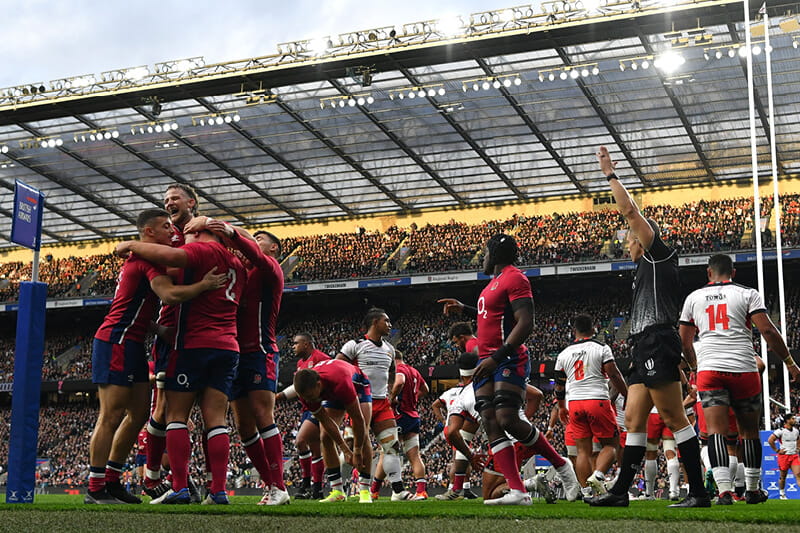 The Autumn Nations Series welcomes some of the greatest rugby teams in the Northern and Southern Hemispheres as they come head-to-head for a series of phenomenal test matches.

The 2021 series were fiery, intense and nothing short of spectacular. The return of crowds to Twickenham Stadium was a welcome change to the previous years that took place behind closed doors, and electric atmosphere echoed round the stadium once again.

Thousands of roaring fans descended upon the stadium in November to see England face Tonga, Australia, and South Africa on their home turf for three nail-biting matches. Each team boasted startlingly different strengths and capabilities, adding to the drama that was witnessed by those lucky enough to attend and absorb the incredible atmosphere.

Tonga was not prepared for what England had in store during their first match at the iconic stadium. High pace performance from the home side meant that Tonga simply could not keep up, failing to gain any advantage throughout the duration of the match.

One week later, Australia took to the pitch without a number of their key players, limiting their impact against an unstoppable England side who were able to produce some excellent tries.

And finally, two of the greatest rivalries of all time met once again. While World Champions, South Africa dominated and controlled their territory and battered England upfront, their defence lacked and was strongly taken advantage of, allowing England to get past and score those all-important tries. Everything led up to the 79th minute. A late penalty caused by England’s ill-discipline took the score to 26-24 to the Springboks with only five minutes till the final whistle, cutting it uncomfortably tight. This was England’s final opportunity.

Luck appeared to be with the Red and Whites, leaving Marcus Smith the chance to score one final time. With seconds to spare, Smith scored, producing an exhilarating cheer from the tense crowd as England supporters were finally able to celebrate a final score of 27-26.

The 2022 Autumn Nations Series will see England face some of the greatest rugby teams in the world at Twickenham Stadium once again. New Zealand, Argentina, Japan and South Africa will face the home side – what a winter we have in store!

As one of South America’s top rugby teams positioned amongst the best on the international stage, Argentina is a dominant force. England have met the Argentinians for 24 test matches, with 19 wins being claimed by the Red and Whites. Their last meeting took place at the 2019 World Cup in Japan, where England stoke a victory of 39-10. Will Argentina take revenge in 2022? 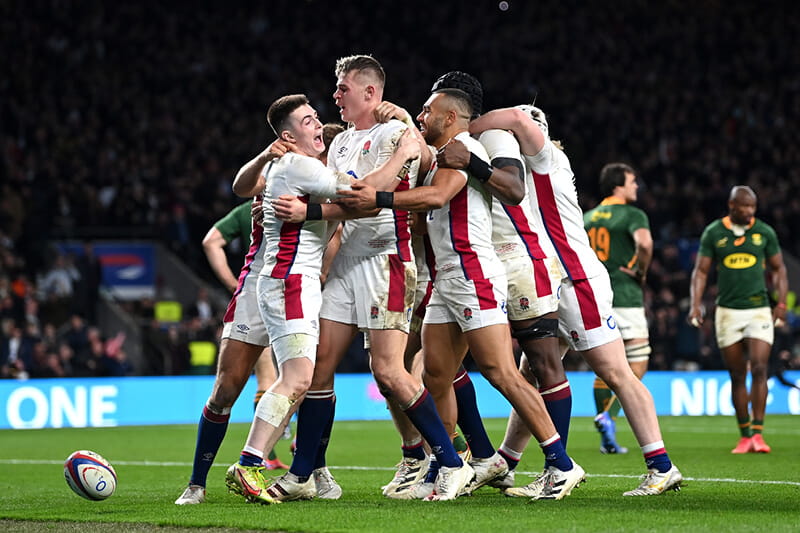 Rugby has thrived in Japan for over a century, having competed in eight World Cups since the inaugural edition in 1887 while producing unexpectant performance against top international sides. England last met Japan in 2018 at Twickenham, where they stole the victory to win comfortably in the second half.

The mighty All Blacks are one of the most successful rugby teams of all-time and produce enviable performance time after time. Claiming three World Titles and the number one top spot for over 80% of the time since the rankings system was introduced in 2003, they are undoubtably one formidable force.

Their traditional Maori war dance, The Haka, is famous worldwide and now you can witness it for yourself just metres away from the pitch.

England last met the All Blacks at the 2019 World Cup in the crucial semi-final stage, where England produced an incredible and dominant 19-7 win over the mighty side. Who will come out on top in this year’s series?

One of England’s greatest ever rivals will return to Twickenham Stadium for another year of high intensity matches in the quest to come out on top over England. After this year’s autumn series and fiercely tight match between the two sides, producing a final score of 27-26, we can almost guarantee that this will be an exciting match that you will not want to miss.

Witness the best teams in the world go head-to-head at Twickenham Stadium and tick this momentous occasion off your bucket list. Enjoy world-class rugby with an impeccable hospitality experience to elevate your day.

Find out more about our hospitality experiences at Twickenham Stadium for the Autumn Nations Series 2022 and watch England face Argentina, Japan, New Zealand and South Africa.

Click here to find out more about our experiences for the Gallagher Premiership Final 2022.