Rugby union and American football are two sports which even a casual observer would notice are broadly similar. Each share a familiar shape and format but are played in entirely different parts of the world and have completely separate fan bases. How then, did these two similar but separate sports develop and which of them came first? That’s exactly what we’re going to try to uncover by looking at both rugby origins and the history of American football.

There is a commemorative stone at Rugby School which claims that in 1823 William Webb Ellis ‘with a fine disregard for the rules of football…first took the ball in his arms and ran with it.

This potentially apocryphal story is held up by many as the origin of the sport but in truth, the ‘rules’ referred to on the stone were already rules of a game with some similarities to modern rugby. 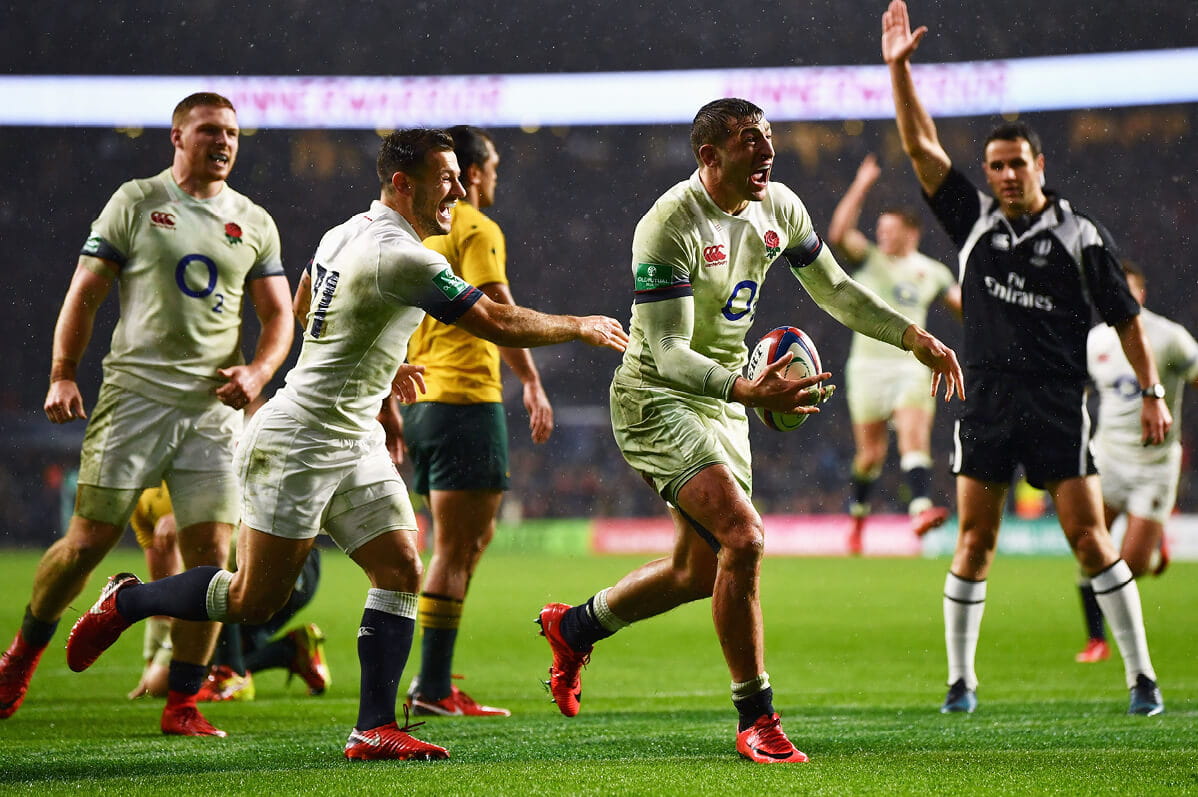 Throughout the 19th century at Rugby and other public schools, disorganised games of football already involved players catching the ball and kicking it out of hand, for instance. If it really did happen, then, Webb Ellis’ decision to run with the ball was at most a further evolution in a game which had already begun to be established.

Games of this early variation of rugby football remained disorganised and were based around differing sets of rules devised by the players themselves. Those rules bore some relation to modern rugby rules but featured many significant differences. Touching the ball down beyond the posts, for example, did not score any points but instead gave the scoring team a chance for a ‘try’ at kicking for goal. That, then, accounts for the continued use of the word ‘try’ in modern rugby. It was in 1871 that the first codified set of rugby rules were set down by the game’s very first governing body. That governing body was the Rugby Football Union (RFU), which formed in a London hostelry and began to organise and make official a sport which had up to that point grown entirely organically.

From the 1870s onward, the game of rugby continued to develop and to be spread around the world, largely thanks to Britain’s imperial endeavours. The spread of the game saw it take root in many different countries, including Canada, and that would be crucial to the development of American football.

Whilst there are some mentions of Native Americans playing a football-like game, American football really has its origins in the same types of disorganised European football games which spawned rugby. European settlers in North America brought those games with them and by the 19th century intramural games on college campuses became popular, but were generally all played to different sets of rules. Whilst they were produced some two years after the first rugby rules created by the RFU, there was little similarity between the two, with the American rules still sticking pretty close to those developed by the FA. It was a university which wasn’t involved in drawing up those original rules, in the shape of Harvard, which would play the pivotal role in moving American football closer to rugby union.

As Harvard had not been a part of the codification of American football rules and wished to continue playing by their own, it was difficult for them to schedule games against other American universities. In response, they looked to Canada and Montreal in particular for their opposition.

Harvard played McGill University from Montreal on a number of occasions, often playing by the Canadian institution’s rules. As we mentioned earlier, Canada was one of the countries to which rugby had been exported successfully from Britain and as such McGill’s rules were far closer to those of the RFU. That form of rugby-influenced football proved popular with Harvard and in 1875 they challenged closest rivals Yale to a game.

In order to account for the differences between the preferred rules of the two institutions, the game was played to so-called ‘concessionary rules’. Those were rules which combined elements of Harvard’s favoured rugby-influenced game and Yale’s version that remained more similar to association football. Those rules, therefore, provided the first framework for true American football rules akin to those we would recognise today. The game between Harvard and Yale in 1875 attracted around 2000 spectators, of which one was a student named Walter Camp. Camp would come to be known as ‘the father of American football’ due to the role he played in shaping and developing the initial rules of the game to create truly modern American football.

Camp was initially instrumental in reducing team sizes to 11, introducing the line of scrimmage and down and distance rules and establishing a snap from the center to the quarterback. Through the 1880s, too, he was central to other changes, such as refining points scoring and legalising blocking. All of those changes were implemented by 1900 and with the legalisation of forward passes in 1906, American football as we know it today had largely taken shape.

There is no simple answer, therefore, to the question of whether rugby or American football came first. Both sports trace their origins back to the same disorganised football-style games popular in Europe in the 19th century and earlier, and there are compelling arguments on either side as to which sport truly established itself first.

Rugby union gained a codified set of rules some two years before American football, in 1871 as opposed to 1873, but those rules bore little resemblance to modern rugby rules. American football, meanwhile, developed at a more rapid pace and by just after 1900 had already established a set of laws and rules broadly similar to those applied to the NFL and college football today.

The best way to describe the relationship between rugby and American football, therefore, is to borrow the biological term of parallel evolution. The two sports share common origins and have definitive similarities but developed entirely separately from one another in completely different environments.

A number of the world class venues for which Keith Prowse provide hospitality packages play host to both rugby union and American football games. We have outstanding rugby hospitality options on offer, for instance, for visitors to attend matches at Twickenham and can ensure that you enjoy your chosen high quality sporting action in unmatched comfort.