Cricket’s newest and most exciting innovation takes the stage across the UK this summer. Some of the world’s best cricket players will battle it out in The Hundred, an action-packed, unmissable 100 ball cricket competition. Edgbaston will be one of eight stadiums involved with Birmingham Phoenix ready to take flight on home turf. In this blog, we explore the home side, ones to watch and who the Birmingham side will face in the tournament.

Birmingham Phoenix men get underway versus London Spirit, who travel to Edgbaston to show them what the spirit of the capital really looks like. However, Birmingham Phoenix will certainly put up a fight; their team is both powerful and fierce. Chosen from a 570-strong player pool, Liam Livingstone was the first player picked

alongside New Zealand batsman Kane Williamson, who was then picked from the international player pool. Benny Howell and Pat Brown were quickly snapped up, joining existing teammates and England internationals Chris Woakes and Moeen Ali. Ali will be leading the star-studded team and is actually an Edgbaston local himself… “I grew up in this area and to be the first-ever men’s captain of Birmingham Phoenix is very special for me. We’re a tight-knit city in Birmingham. We have so much around us that brings the people together, no matter who you are or your background. I know how much of a uniting game cricket is and as a leader of the Birmingham Phoenix that is something I definitely want to promote.”

Birmingham Phoenix will also have their limits tested at Edgbaston by revolutionary side Manchester Originals, the Southern Braves, who boast strength and stamina, and last but certainly not least the Trench Rockets - who will prevail in the ultimate battle of the sky? 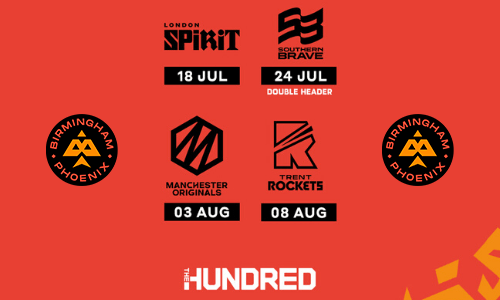 All three of these teams have lineups packed full of talent and skill including Joe Root, Jos Buttler and Jofra Archer to name a few.

“It is new and that is exciting, but we are not just turning up to be part of something new. We want to win.”

Without doubt, a powerful force on the Birmingham side will be the pulsating, electrifying atmosphere for home games at Edgbaston. Find out more about the packages on offer and secure your place today!

Alternatively, watch England in action at Edgbaston for the ODI against Ireland...

...or for the Test Match against the West Indies...