Two Michelin-starred chef Tom Kerridge makes his much-anticipated return this autumn to The Lock restaurant, located in the heart of Twickenham Stadium. Tom has once again designed a sumptuous menu that highlights some exquisite in-season ingredients which we can’t wait to sink our teeth into.

So, we thought we’d take a closer look into his history and what made Tom the award-winning chef he is today.

Where did it all start?

Tom grew up in Gloucestershire and at the age of 18 joined culinary school in Cheltenham, which is where his love for cooking started. He started his journey as a commis chef at Calcot Manor; later on Tom moved to London to grow, learn and develop his skillset working under the likes of Phillip Britton, Steven Bull and Gary Rhodes. Moving on and up, Tom deservedly became the head chef at Michelin-star fine dining restaurant Adlard’s.

His experience at Adlard’s gave Tom the confidence alongside his wife, Beth, to take over the reins at The Hand and Flowers of Marlow. At the time the pub was pretty run down, fast forward 12 months – the now gastropub was the proud owner of a Michelin star. After working at such a high standard Tom and the team were presented with a second Michelin star in 2012, and consequently The Hand and Flowers became the first gastropub to ever achieve two stars - another amazing achievement under his apron.

Tom's meteoric rise started on his first apperance on The Great British Menu, a TV show where professional chefs compete against one another to cook for distinguished guests at a banquet. Tom made history on the show in 2010 when he won the main course round two years in a row. Tom has since made guest appearances on the show as a judge, ensuring the chefs maintain the high standards he set. 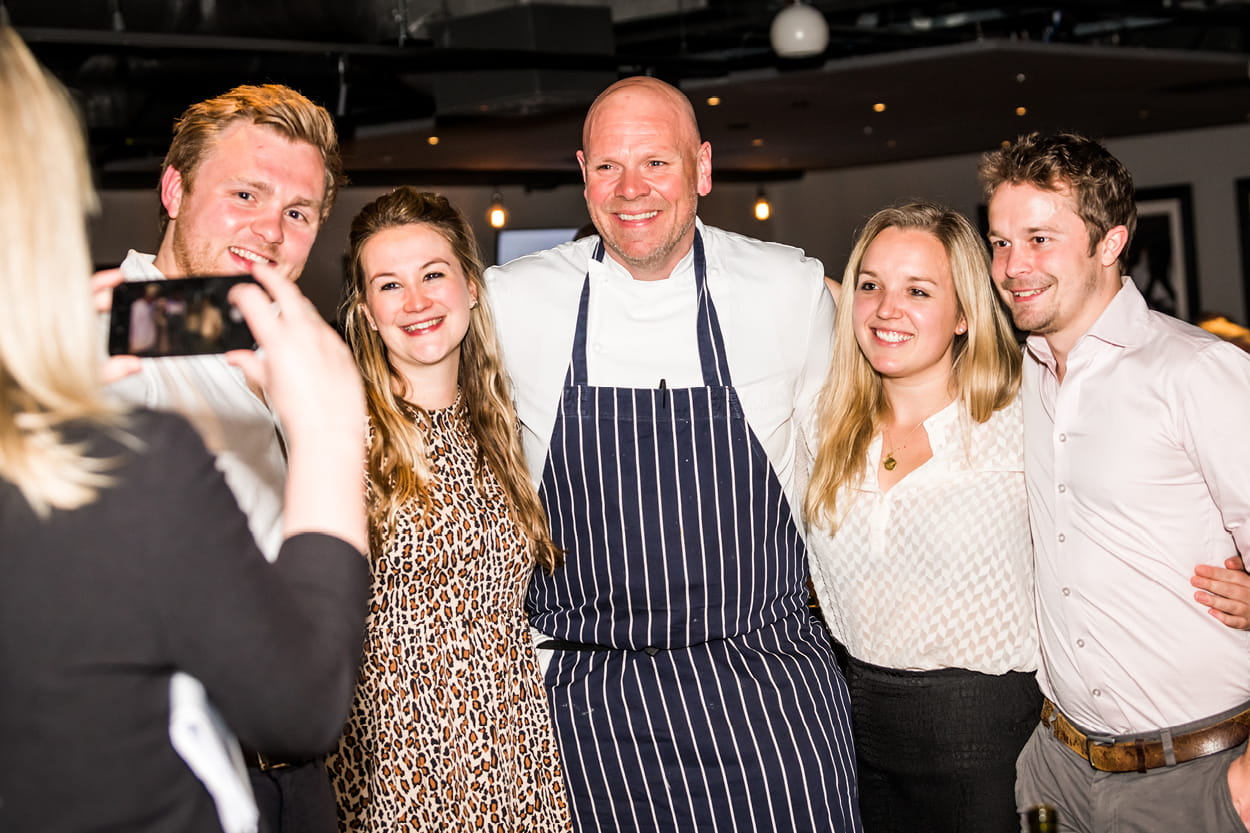 The here and now

Tom went on to open a sister pub called The Coach of Marlow which received its own Michelin star in 2018. Other restaurants owned by Kerridge include: The Bull & Bear in Manchester, Kerridge’s Bar & Grill in London and the man of many talents also runs his own Butchers in Marlow. Tom has now even started his own festival, celebrating his passions for food, music and of course beer!

Tom has also made many guest appearances on TV show ‘Masterchef’ judging and producing challenges for the chefs to compete. He also sometimes allows the chefs to work in his restaurants later in the competition; this helps the judges whittle down the contestants as to whether or not they can stand the heat in a professional kitchen.

So, a little bit about the man himself. Tom now weighs in at a staggering 12 stone lighter than he was at his heaviest, Tom achieved this by making some serious lifestyle changes where he completely revamped his diet - clearly to great success. Following the weight loss journey Tom released several best-selling books, notably ‘Lose weight for good’ which topped the sales charts for several weeks.

Now unless you’ve been living under a rock recently, you would’ve seen the very public battle between Manchester United forward Marcus Rashford and the Government. Marcus is trying to put an end to child food poverty, something the forward went through himself growing up. Tom has teamed up with Marcus to help use both their platforms to promote cheap and healthy meals for children and adults alike to cook. They’ve called it ‘Full Time Meals’ and it’s proving a real hit. Full Time Meals also helps children, teenagers and adults how to cook and shows that it can be quite simple.

Tom played the great game of rugby from a young age and although his time playing has come to an end, his love for rugby continues. Tom’s first time watching an international match came when England played Scotland at Twickenham, he vividly remembers the electric atmosphere and spine-tingling noise that we have all come to know and love. 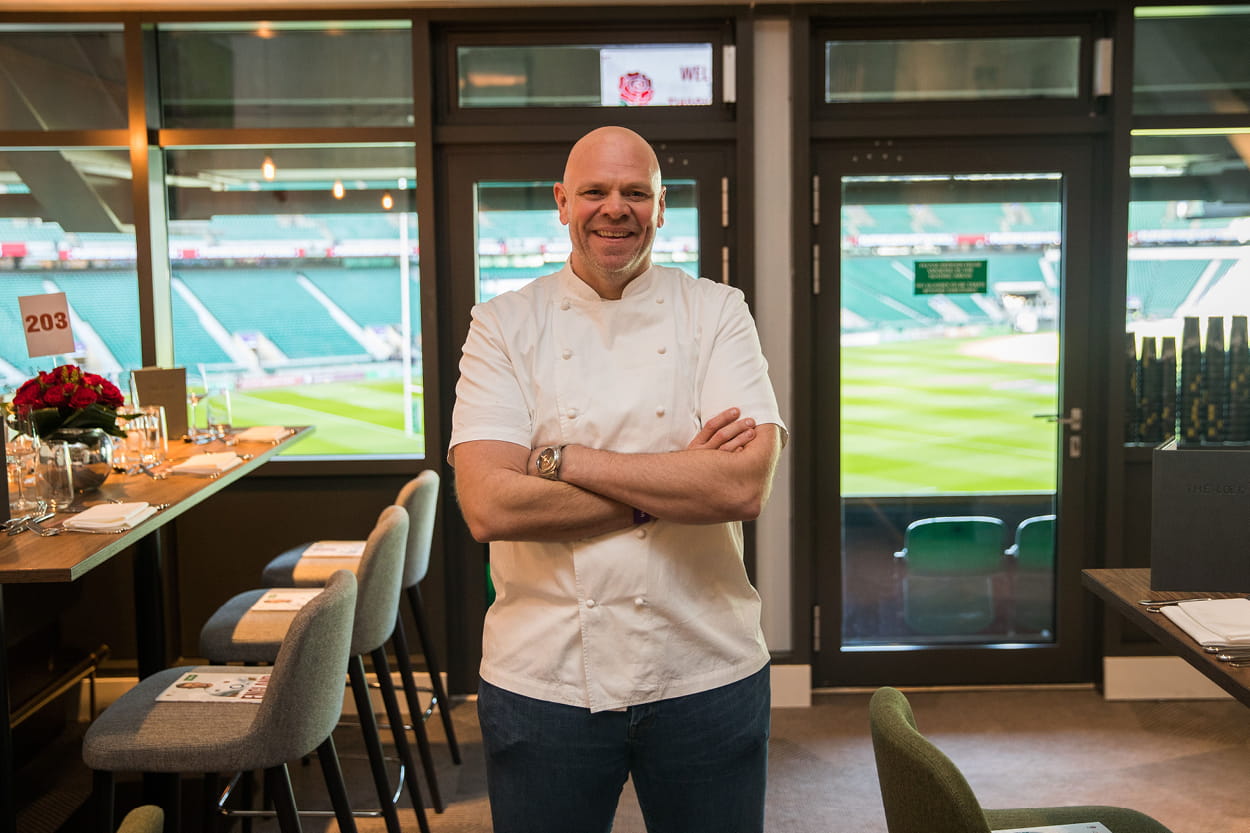 Tom will be returning to Twickenham for a third time this year to cook in the stunning Lock facility. After missing the last two years due to the Covid-19 pandemic, Tom is itching to get back to the hallowed turf of England Rugby and cook for all our amazing guests joining us. Tom describes The Lock facility as a special place with an incredible atmosphere, Tom and co work hard to produce that restaurant experience through incredible food on a mass scale and boy, is it incredible. Tom describes having the opportunity to cook for thousands of passionate rugby fans at Twickenham as one of his career highlights.

If you’re interested in rugby hospitality experiences and want to try the stunning food cooked by Tom, why not join us at the autumn internationals this November. With limited availability – you’ll have to be quick to guarantee your place today, click here for availability at The Lock.