The BBC Sports Personality of the Year Awards are one of the highlights in the sporting calendar. The ceremony is watched by millions of people, eagerly waiting to find out who will claim the award. The event celebrates the incredible accomplishments, initiatives and sports men and women over the past year who help to make sport what it is. The inspirational stories, hard work and dedication of those who devote so much not only their sport, but to the wider community and to individuals who use sports as an escapism. Before we look at Emma’s achievements and why she won this year’s award, let’s take a look at where it all started…

The awards through the years.

The awards were created by Paul Fox, an editor of the magazine show Sportsview, and the first ceremony was held in 1954.

Today, a panel who selects contenders for the awards produce a shortlist that reflects UK sporting achievements on both a national and international stage, representing a diverse range of sports and the impact upon which the sporting achievement has had.

The public vote determines the winner of the prestigious awards.

Sporting legends who have won the award include:

The past 5 sports personality of the year winners are: 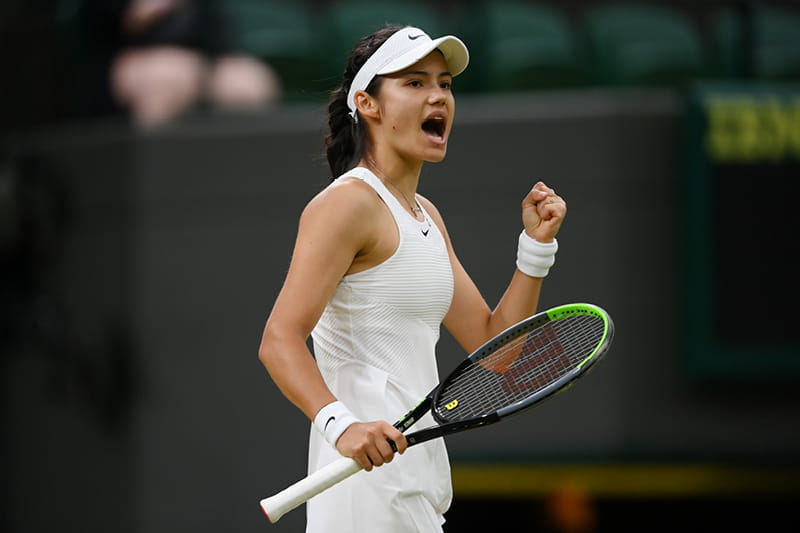 The tennis sensation ended Great Britain’s 44-year wait for a women’s Grand Slam singles champion in remarkable fashion too! The 18-year-old qualifier didn’t drop a set on route to winning the US Open, beating Stefanie Voegele, Zhang Shuai, Sara Sorribes Tormo, Shelby Rogers, Belinda Bencic and Maria Sakkari all in straight sets. Leylah Fernandez was her opponent in the final which Emma also won in straight sets. Emma also made her mark on Wimbledon earlier this year, just 17 at this point, by reaching the last-16 before retiring through injury.

The sky is the limit for Emma now, she has all the talent in the world with a mindset of someone beyond her years; Emma has appointed Torben Beltz as her new coach for the 2022 season and here at Keith Prowse were excited to see what they can achieve next year.

Who were the other nominees for 2021?

The Tokyo Olympics was fourth time lucky for Tom, where he won gold in the synchronised 10m platform alongside Matty Lee his diving partner. It was at just 14 years old when Daley made his Olympic debut in Beijing, 13 years later he has finally completed his dream of becoming Olympic champion!

The unbeaten heavyweight champion of the world beat fearsome rival Deontay Wilder in their trilogy fight last October. However, the win wasn’t smooth sailing; Fury got knocked down twice in the fourth round, before knocking wilder out in thrilling fashion. Surely Fury will now go down as one of the heavyweight greats!

Sterling was one of England’s stand out stars as in the European Championships earlier this year, where he scored 3 goals helping England to their first major tournament final in 55 years. Although England lost on penalties to the Italians, the striker was one of three England payers to make the team of the tournament. He also played a pivotal role in helping Manchester City win their third Premier League title in just four years.

A Paralympic great describes Sarah Storey perfectly, she’s won a staggering 28 medals since making her debut at the 1992 Olympic Games in Barcelona. Starting out as a swimmer, Storey then turned her hand to cycling where she defended the C4-5 road race title for the second time in Tokyo. Sealing her 17th gold medal, Storey cemented her status as Great Britain’s most successful Paralympian.

The Championships at Wimbledon are returning in the summer of 2022, where Emma Raducanu will look to put on a show. Click here to see our hospitality options.

Enjoyed reading this blog? Take a look at some of our other latest content below.