Rugby. A game described as a mortal’s clash of the Titans.

If you’re new to the game of rugby, you might get a little confused about what’s actually going on. You might, for example, wonder why the game keeps stopping; whether there’s actually any difference between a ‘ruck’ and a ‘maul’; and what the heck a scrum is anyway?! 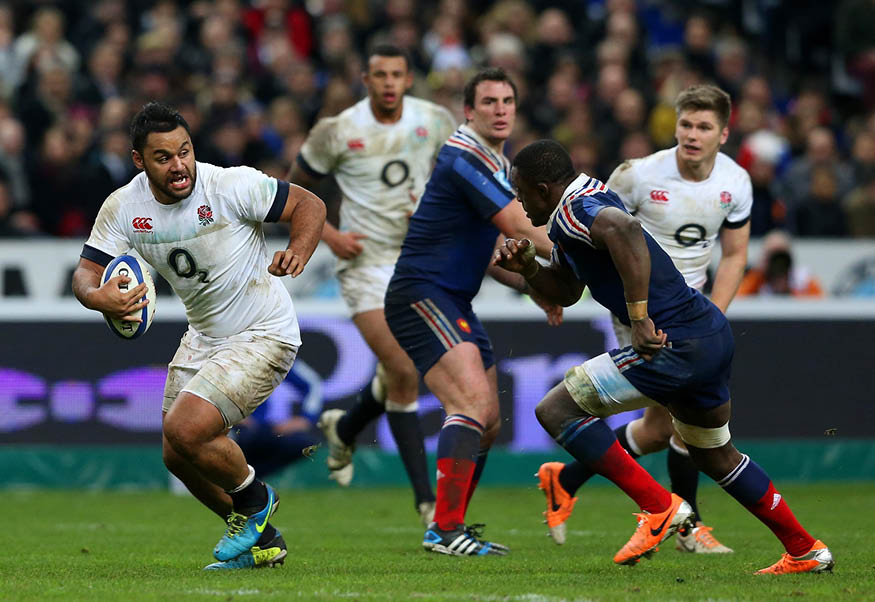 As someone who was – until recently – a rugby novice, I feel your pain. I’ve always enjoyed rugby but, now I understand it, I’ve become one of those slightly annoying people that refer to technical rugby terms in casual conversation.

And, once you’ve learnt it, the game is actually a lot simpler than you think.

The aim of the game is to carry the ball over the opponent’s goal line and force it to the ground to score. Simple, right?

Well, not quite. To go forward, you can only pass backwards. You can kick the ball forward but your team mates must be behind the ball at the moment it’s kicked.

There are four ways you can score points in a game of rugby:

•Try (5 points): A try is scored when the ball is forced to the ground over the opponent’s goal line. A penalty try can be awarded if a player would have scored but for a foul played by the opposition.

•Conversion (2 points): Once you’ve scored a try, you can add two further points by kicking the ball over the crossbar from a place in line with where the try was scored.

•Drop Goal (3 points): Is scored when a player drops the ball onto the ground and kicks it over the cross bar in open play.

•Penalty (3 points): A team may choose to kick at goal if a penalty is awarded after an infringement by the opposition.

If the ball goes off the field at the side, a line out is used to restart play.

The forwards assemble in two lines, one metre apart. The hooker  throws the ball down the corridor between the two lines and the player who successfully catches the ball can either keep it and set up a maul or pass it on.

In order to get the high throws in the lineout, the catcher is lifted by their team mates whilst jumping to catch the ball. The opposition cannot touch a catcher whilst he’s in the air, and holding, shoving or levering are all offences punishable by a penalty kick. 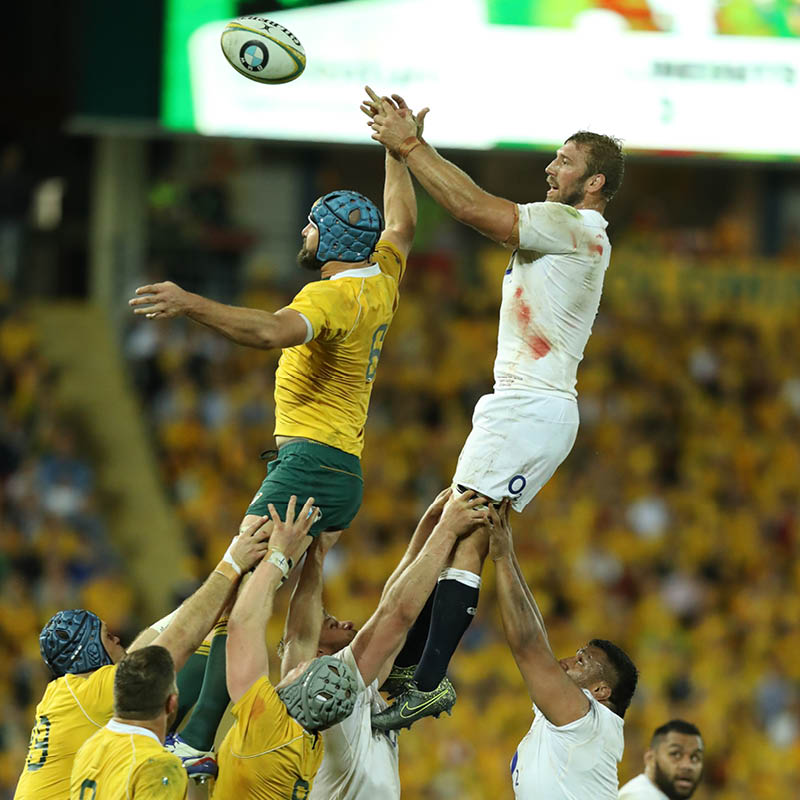 The scrum is another means of restarting play. It is used if there has been a minor infringement (e.g. if the ball is passed forward), or if the ball becomes unplayable in a ruck or a maul.

Eight people from each team lock arms and face each other; they engage with the opposition by interlocking heads with those of the other side’s front row. The ball is thrown into the middle of the tunnel between the two front rows and the hookers compete for the ball, attempting to ‘hook’ it back. The winner of the scrum can keep the ball on the ground and attempt to drive the opposition down field. Alternatively, they can pass the ball into the back line to resume open play. 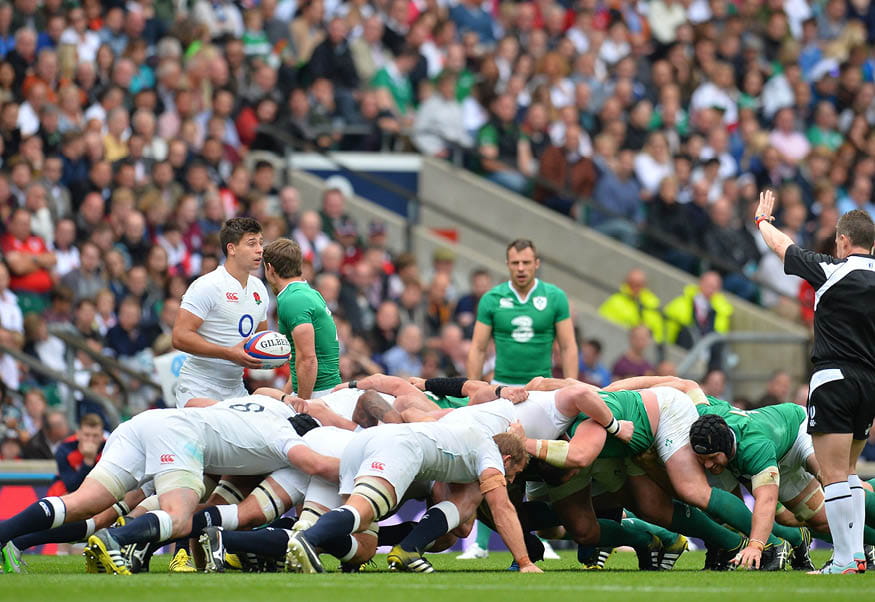 Why Did The Whistle Blow?

It can be difficult to tell why the referee has blown the whistle; so we’ve listed the most common infringements below, along with the signal the referee makes when each infringement occurs during play. 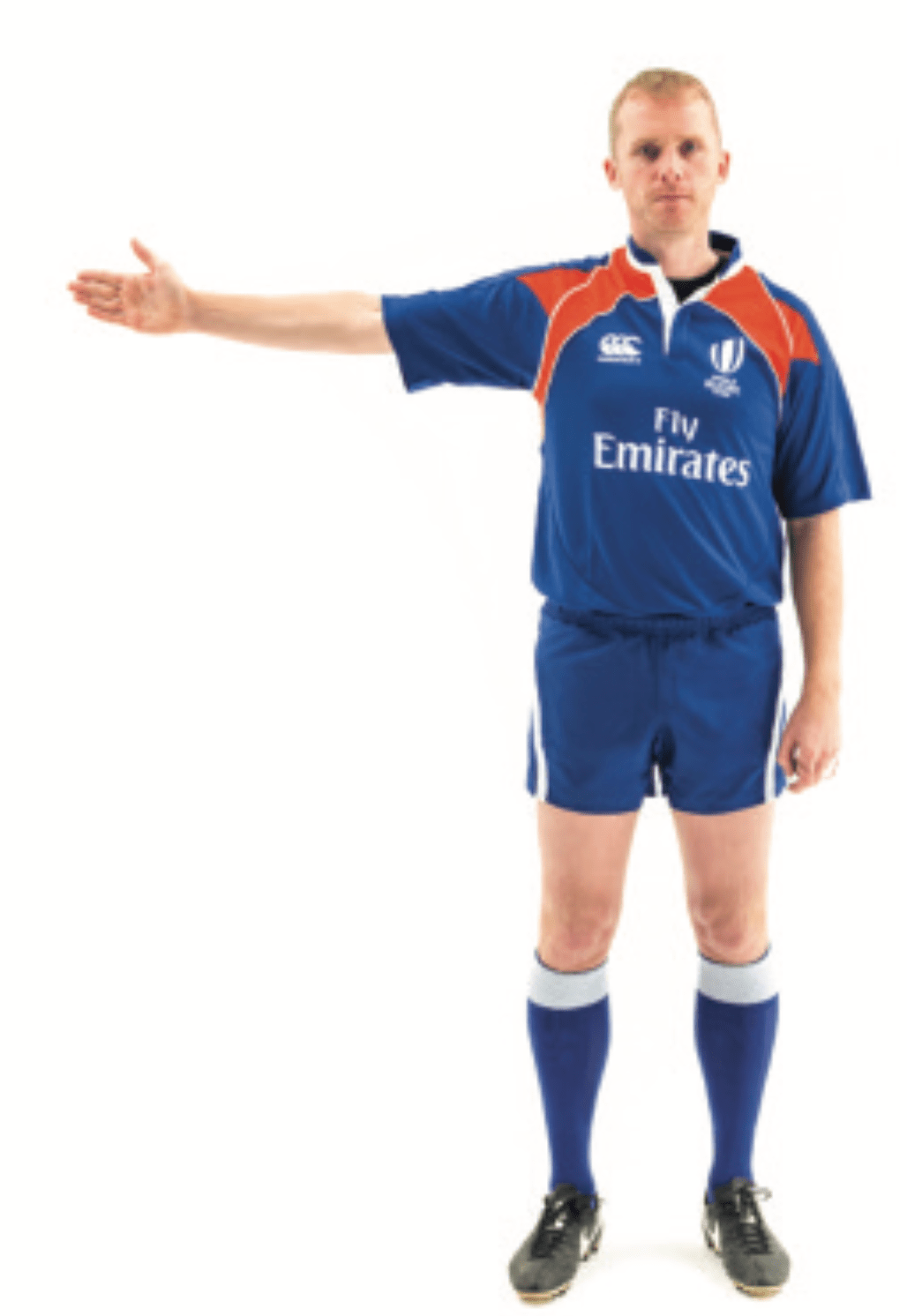 An advantage can be given to either minor infringements (e.g. knock-on), or offences that would result in a penalty (e.g. offside). The referee decides whether there is more benefit to the non-offending team if play continues. If no advantage occurs, the referee will blow the whistle and bring play back to where the original infringement took place.

Forward Pass or Knock On

This one’s pretty self-explanatory; if a pass has gone forwards, or a handling error has resulted in a knock-on, the referee will stop play and award a scrum to the non-offending team. 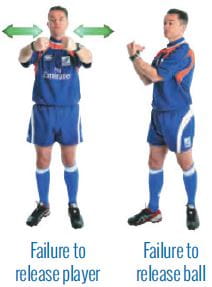 Failure to Roll Away 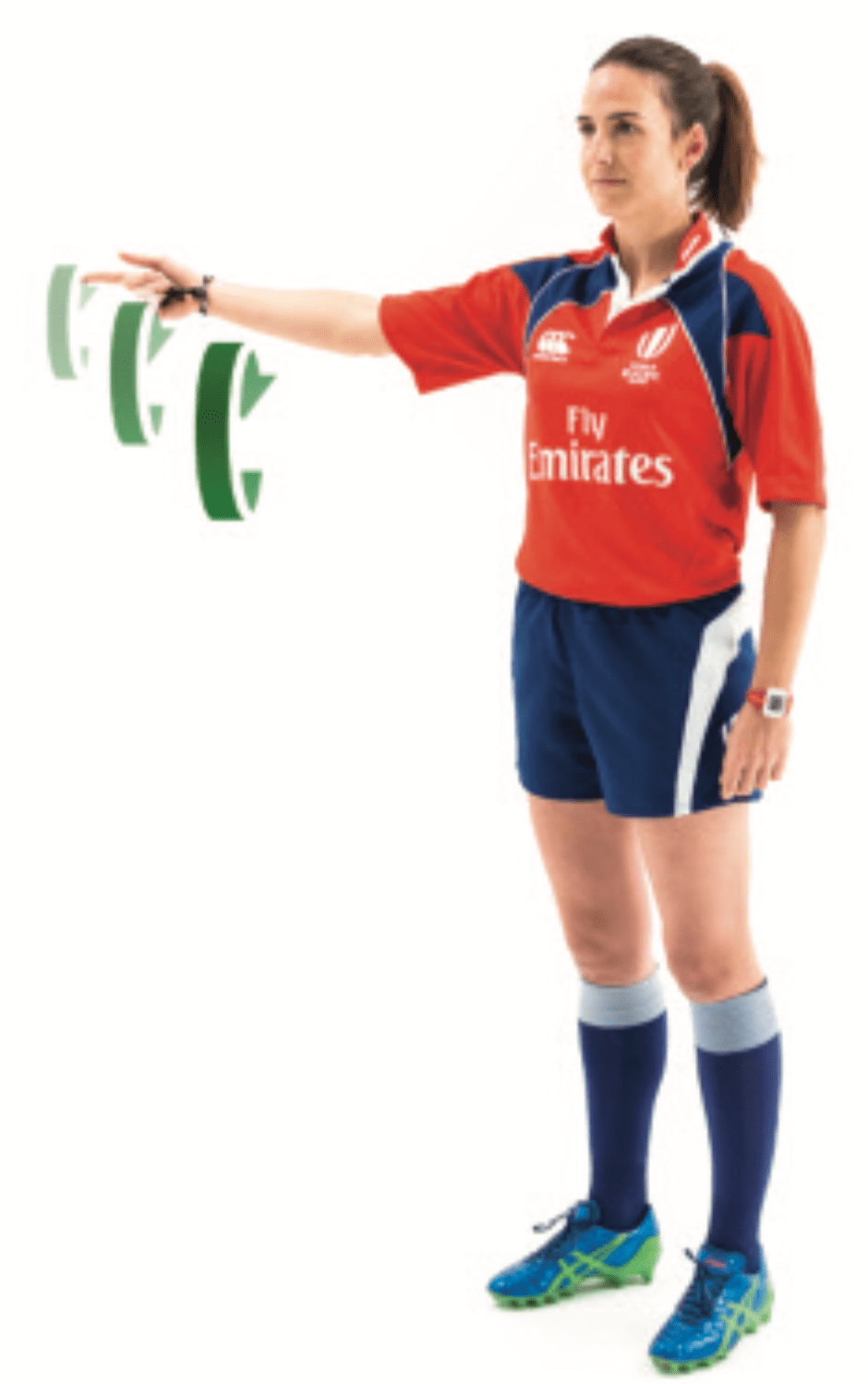 Any players on the ground when a ruck or maul is formed must roll away as fast as humanly possible. Failure to do so will lead to a penalty being awarded to the non-offending team.

Joining Ruck/Maul from the Side

If you want to jump in on the action, you must do so from behind the back foot of your last teammate. If you join from the side, it’s counted as ‘offisde’ and the non-offending team is awarded a penalty 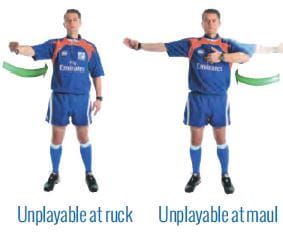 If the ball becomes unplayable e.g. when it’s under players who are on the ground (normally under a few other players!); the referee will award a scrum to the team going forward before the ball became unplayable. For a maul, the scrum goes to the team not in possession when the maul began. 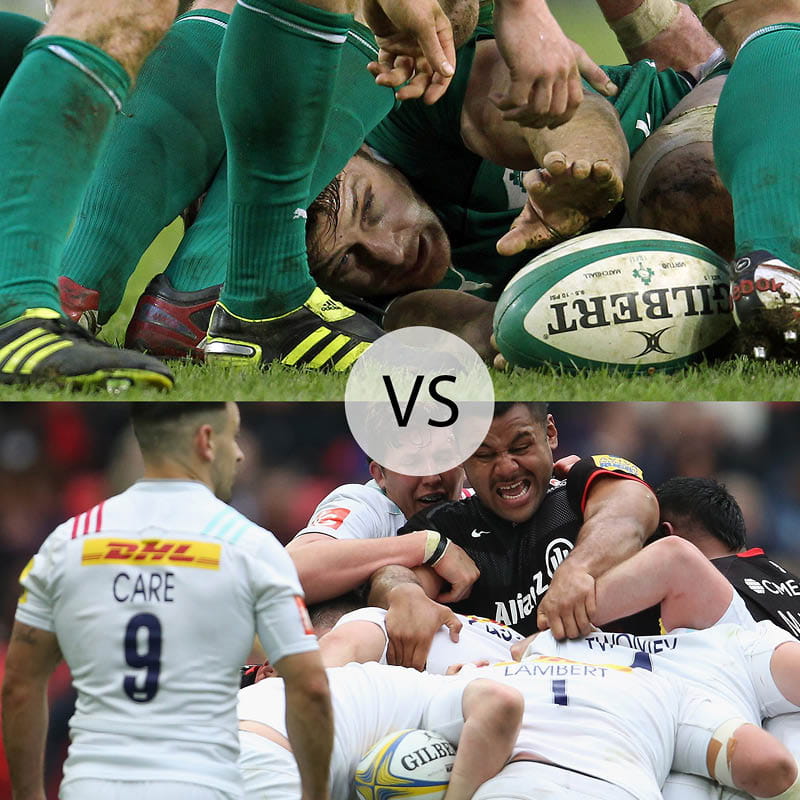 No. Mauls and rucks are not just playground free-for-alls; and no, they are not the same thing – I promise!

In a maul, the ball is held off the floor and the players must try to stand on their feet.

In a ruck, the ball is on the ground and must not be handled by any of the players. Instead, they use their feet to ‘ruck’ the ball (and ONLY the ball) backwards. 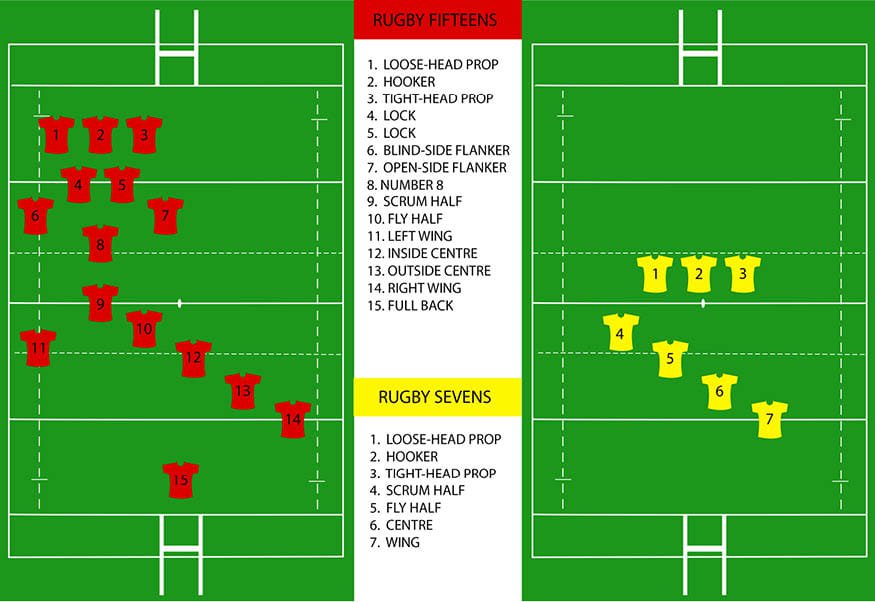 The prop anchors the scrummage and provides lifting strength and support to the lineout jumpers. They are also crucial in rucks and mauls.

The number 8 is a the back of the scrum and must secure possession of the ball and carry it into open play.

The scrum half is the link between forwards and backs at the scrum and lineouts; he must decide whether to distribute a quick ball to the backs, or keep it close to the forwards.

The wings are the accelerator pedal of the team; they provide the injection of speed to outrun the opponent and score a try. They also need to be solid in defence.

Are the ones who win the ball from lineouts and restarts. The drive the momentum in scrums, rucks and mauls and provide a platform for attack.

The Flanker’s job is to win possesion of the ball through turnovers, i.e. for tackling anyone on the opposing team who dares run with the ball.

The centres are key in both attack and defence. They’ll tackle the opposing team, as well as use their speed and power to breach defences.

The last line of defence; the full back myst be confident under a high ball, have a good boot to clear the lines, and a try-saving tackle that could stop a freight train.