JONNY MAY SHINES THROUGH THE GLOOM

England began Saturday’s Calcutta Cup tie with a heart-in-mouth moment. Scotland centre Sam Johnson, who inspired their comeback at Twickenham alongside Finn Russell a year ago, hared after Stuart Hogg’s kick-off. As the wind gusted unpredictably, Jonny May seemed understandably uncertain beneath a wobbling ball.

May did haul in an overhead catch, but then lost possession as Johnson clattered into him. Fortunately for England, George Ford was on hand to scoop up and clear. The dicey episode would not be an omen for May’s afternoon.


In grim conditions, especially for back three players, the Leicester Tiger kept himself warm by roaming around the field and offering himself as a runner during phase-play. He popped up close to the ruck as well as out wide. Across the England side, only Tom Curry returned a greater tally than his nine carries. May could not replicate the spectacular solo tries of England’s Guinness Six Nations-opener against France, but still produced an assured display.

He was prominent in a chaotic aerial battle and two defensive contributions stood out. First, May cut down Rory Sutherland after the Scotland loosehead had trucked up-field in the 41st minute. Shortly afterwards, amid a slightly panicky period for England, he returned a favour and bailed out Ford by hacking a loose pass into touch. He has certainly developed into one of Eddie Jones’ most consistent and important individuals.

Following a 24-17 loss to France, Jones insisted that he would keep Curry at number eight. In the absence of Billy Vunipola, England’s head coach has a hunch that the 21 year-old is skilful and athletic enough to excel in that position.

Curry, who has already starred at openside and then blindside flanker over a short yet accomplished international career to date, was disappointed with his outing against Les Bleus. He responded with authority.

Although Curry will never be as imposing as Vunipola, he carried with zip and tenacity at Murrayfield – often beyond the 15-metre lines. He patrolled the back-field to help cover opposition kicks and helped force three turnovers, two at the breakdown and one at a maul inside his own 22.

Along with fellow starters Maro Itoje, George Kruis, Lewis Ludlam and Sam Underhill, Curry made it extremely tough for Scotland to find any fluency. Itoje’s diving strip-tackle on Ali Price early on epitomised the outstanding lock’s capacity for disruption.

Perhaps most encouragingly, Curry’s control at the base of the scrum – an area of trouble six days previously – had improved. He is a quick learner, and newly-instated forwards coach Matt Proudfoot deserves plenty of credit as well.

Speaking of Proudfoot, his former boss Rassie Erasmus was watching from the stands on Saturday – no doubt scouting out Scotland ahead of their visit for a two-Test series against the Springboks in July.

Erasmus will have noted one particular tactic used by his South Africa side during their World Cup-winning campaign in Japan last year. The six-two split of forwards to backs on England’s bench was a ploy designed to overpower Scotland late on.

Although only four of those forward replacements were required, with both Jamie George and Kyle Sinckler lasting all 80 minutes and leaving Tom Dunn and Will Stuart surplus to requirements, England eventually splintered the hosts. A powerful scrum, which milked penalties, was a deciding factor.

Lineout accuracy and muscular mauling, with Kruis quietly excellent, completed an admirable set-piece effort from England. Another of South Africa’s strategies on the way to glory in Japan was keeping their props fresh. After being rested last weekend, Mako Vunipola impressed. And an in-form Ellis Genge represents a potent weapon to bring off the bench.

WHO WILL START AT SCRUM-HALF AGAINST IRELAND?

Two miscued kicks that sailed directly into touch, just before he 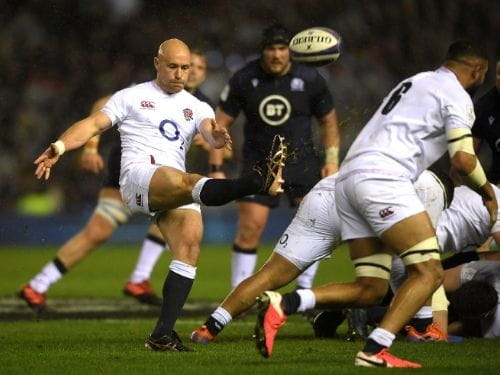 was replaced by Ben Youngs, should not detract from what was a reasonably neat 58 minutes from Willi Heinz. The Gloucester man distributed well and organised England’s defence shrewdly. For most of the final quarter, Youngs appeared more decisive than he had been against France, almost as if being switched from starter to ‘finisher’ acted as a spur.

Jones will almost certainly blood at least one rookie scrum-half in Japan this summer. As an apprentice for the Six Nations, Northampton Saints youngster Alex Mitchell must be in pole position. For now, though, he faces a fascinating choice between Heinz and Youngs.

Ireland travel to Twickenham on the back of two victories. They will put every area of England’s selection – probably Jones’ pick at scrum-half and the Curry conversion project most critically – under immense scrutiny. 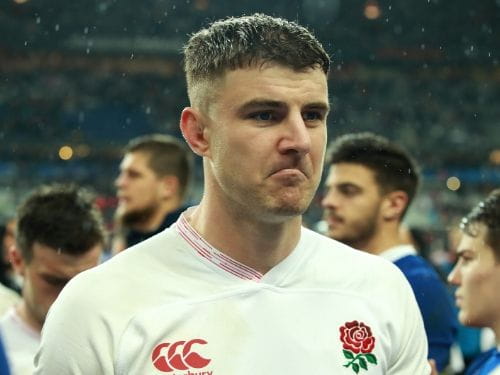 OLLIE DEVOTO MUST BE GLAD TO MOVE ON FROM MURRAYFIELD

Four years ago, England held on to beat Scotland in a low-scoring affair. A certain centre sat on the bench throughout the game, ending it as an unused replacement because Jones kept faith with a midfield trio of Ford, Owen Farrell and Jonathan Joseph.

Sound familiar? History repeated itself for Ollie Devoto on Saturday. After that game in 2016, he needed to wait almost four months to make a Test debut in a one-off game against Wales. A brief cameo in the recent defeat by France represented only his second senior international.

Ford and Farrell eventually came through for England, the former’s clever kick coaxing an error out of Hogg under pressure from the latter. That said, Devoto’s heft might have given the visitors a different dimension in attack. Will Jones give him a chance to replicate his excellent Exeter Chiefs displays at some point over the Championship?

Given Ireland have Bundee Aki and Robbie Henshaw at their disposal, and sent those runners through the channel of Wales outside centre Nick Tompkins, Devoto could yet become an important figure for England.

Watch the England squad in action at Twickenham for the 2021 series of the Six Nations. Book premium hospitality here.