The iconic and highly anticipatedQueen’s Club Championships, formally recognised as the cinch Championships, is now just six weeks away. Things may look a little different than previous years, due to social distancing measures and COVID-friendly rules put in place, but after the postponement of the 2020 version, the event is going to be a standout in the LTA’s summer calendar.

To get you in the ‘Queen’s Club mood’, we’re going down memory lane – here’s the last five years of Queen’s, including champions, wildcards and standout moments… 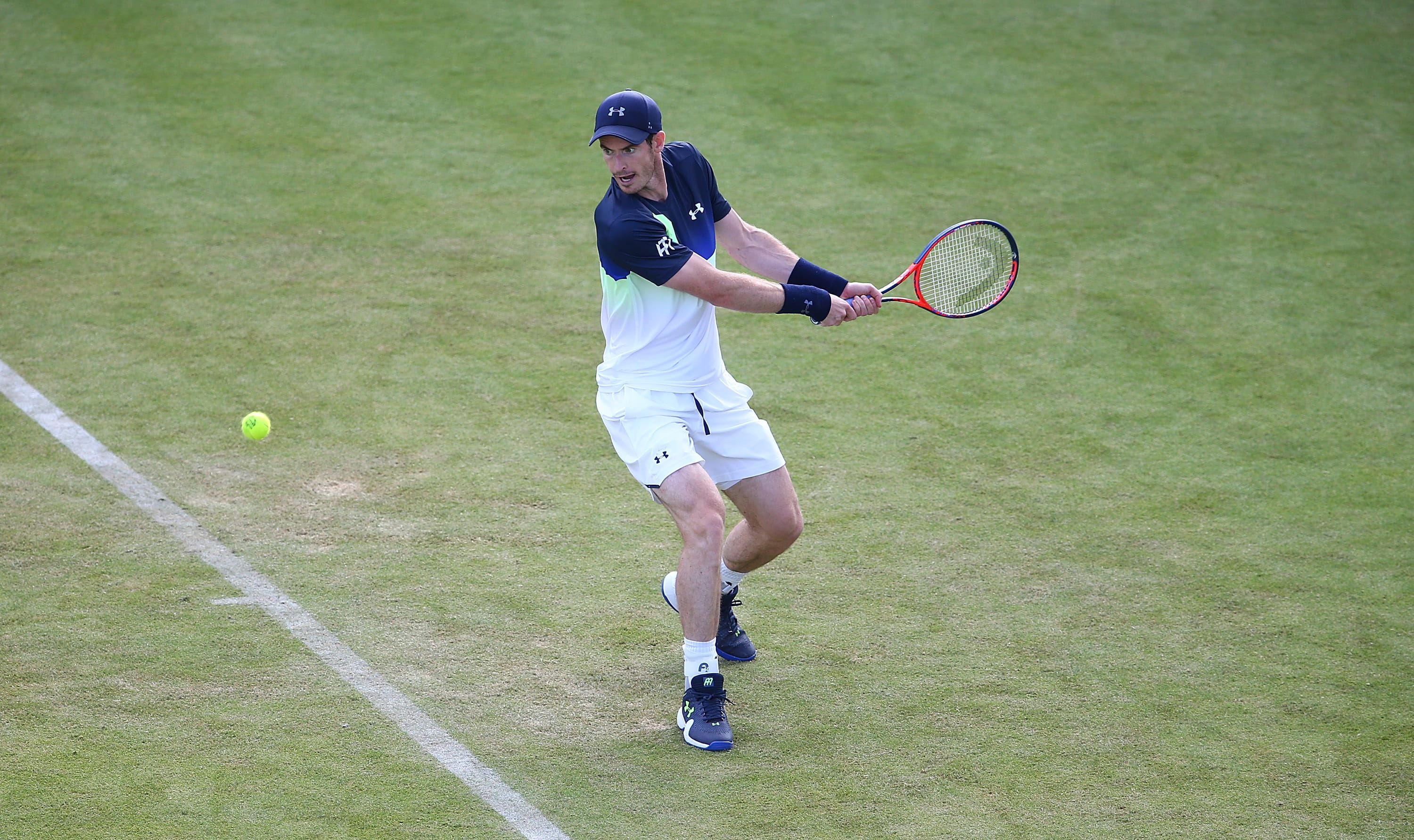 This year proved to be a special year for the tournament; what was then known as the Aegon Championships, the Championships was part of the ATP World Tour 500 series – a first-time upgrade from the 250 series.

Whilst the tennis tournament is regularly known as the leading light of the London lawn tennis season, 2015 proved to be a strong year. Eight of the world’s top 13 headed to Baron’s Court, including our very own national treasure, Sir Andy Murray. In fact, the home-grown talent made it his 5th title since 2008, after he defeated South African Kevin Anderson in the final 6-3 6-4. Other entrants included Spaniard Feliciano Lopez, French star Gilles Simon and big three member, Rafael Nadal.

There were a few wildcard entries too. The former Wimbledon champion Lleyton Hewitt and four-time Queen’s champion was said to be a no-brainer when handing out the entries. Despite it being his last Queen’s tournament, it was, in fact, Queen’s runner up Kevin Anderson that would knock him out at 6-7, 7-5, 6-2.

The two remaining wildcards were first handed to Brits James Ward, World No.106, and Kyle Edmund, who, at just 20 years old, had recently qualified for the Australian Open. However, what was once a moment of joy tuned into a soft blow for the Brits, as Edmund had to withdraw due to an abdominal injury. Edmund’s wildcard was then awarded to Greek-Australian Thanasi Kokkinakis. Of course, we’re certain that Sir Andy made it up to the Brits when he took home the trophy!

As for doubles, it was French duo Pierre-Hugues Herbet and Nicolas Mahut that took home the trophy, after defeating Polish Marcin Matkowski and Serbian Nenad Zimonjic, 6-2 6-2. Despite Murray being crowned as Singles Champion, he wasn’t quite able to reach the final with fellow Brit Dominic Inglot. 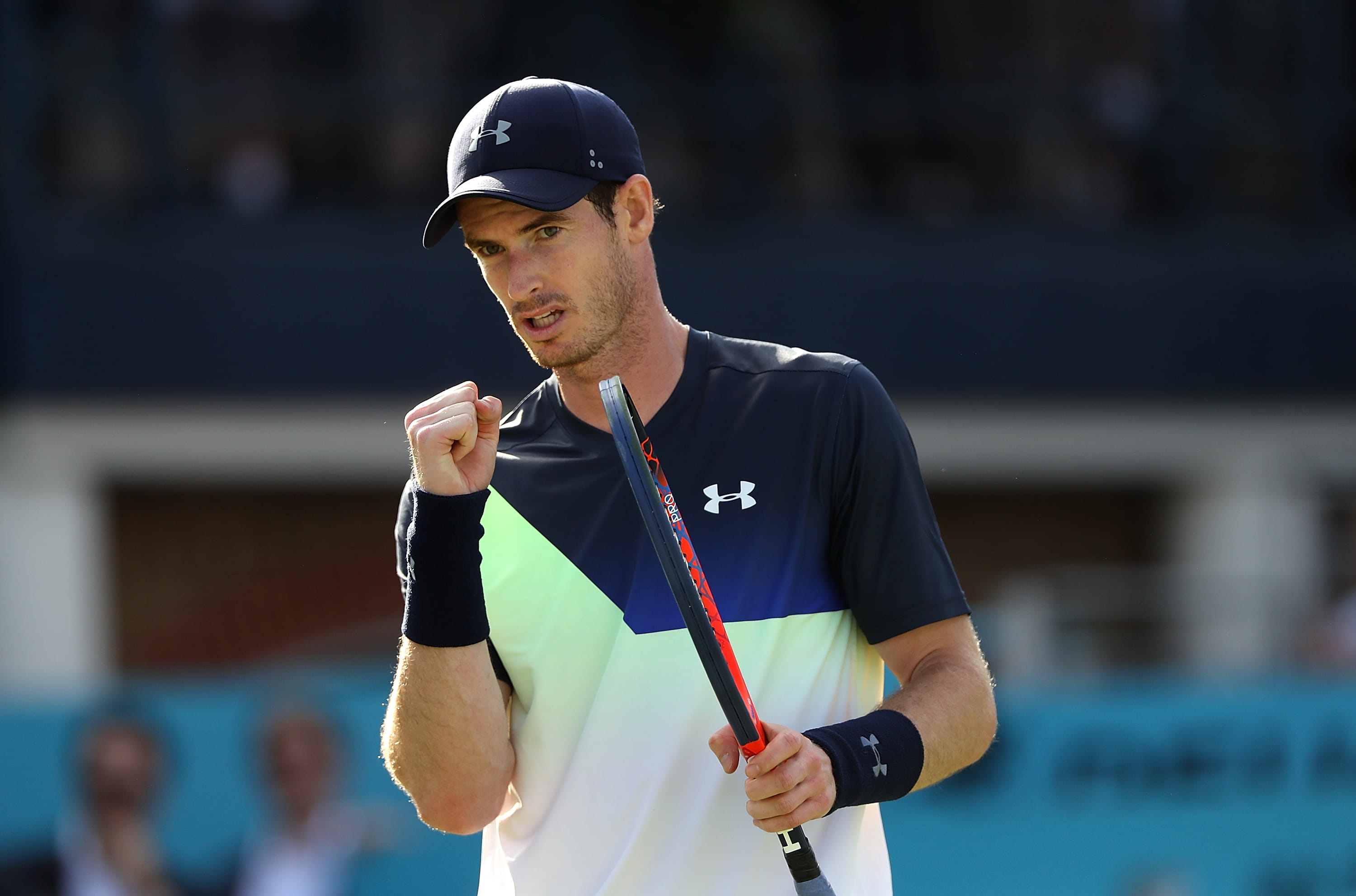 We aren’t saying 2016 was anything less exciting than 2015, but it was pretty similar in areas. Once again, Andy Murray claimed another victory for Great Britain, and came out as Queen’s Singles Champion for a second year running, after he narrowly defeated Canadian tennis legend Milos Raonic 6-7, 6-4, 6-3. Murray even had to beat 21-year-old Yorkshireman Kyle Edmund in the quarter final – unfortunately, it was the Scot that reigned supreme.

2016’s win for Murray made him the first player to win five Queen’s Club titles, separating himself from elite players such as Becker and Hewitt. It came down to a netted volley from Raonic that gave Murray win number five. With serves up to 120mph, we have one question for you Andy…how on earth are you able to parade around the court with such a trophy afterwards?!

In the Doubles category, Pierre-Hugues Herbert and Nicolas Mahut were the defending Queen’s Club Championship champions after their impressive 2015 win. To no surprise, the dynamic duo were able to defend this title successfully for another year, after scoring a commendable 6-3, 7-6 win over Aussie Chris Guccione and now-retired Brazilian André Sá.

Regarding wildcard entries, it was the Brits that went wild. The Davis Cup trio Kyle Edmund, James Ward and Daniel Evans took a wildcard ticket each, whilst Edmund received a wildcard into the doubles draw with Alijaz Bedene, who represented GB at the time. 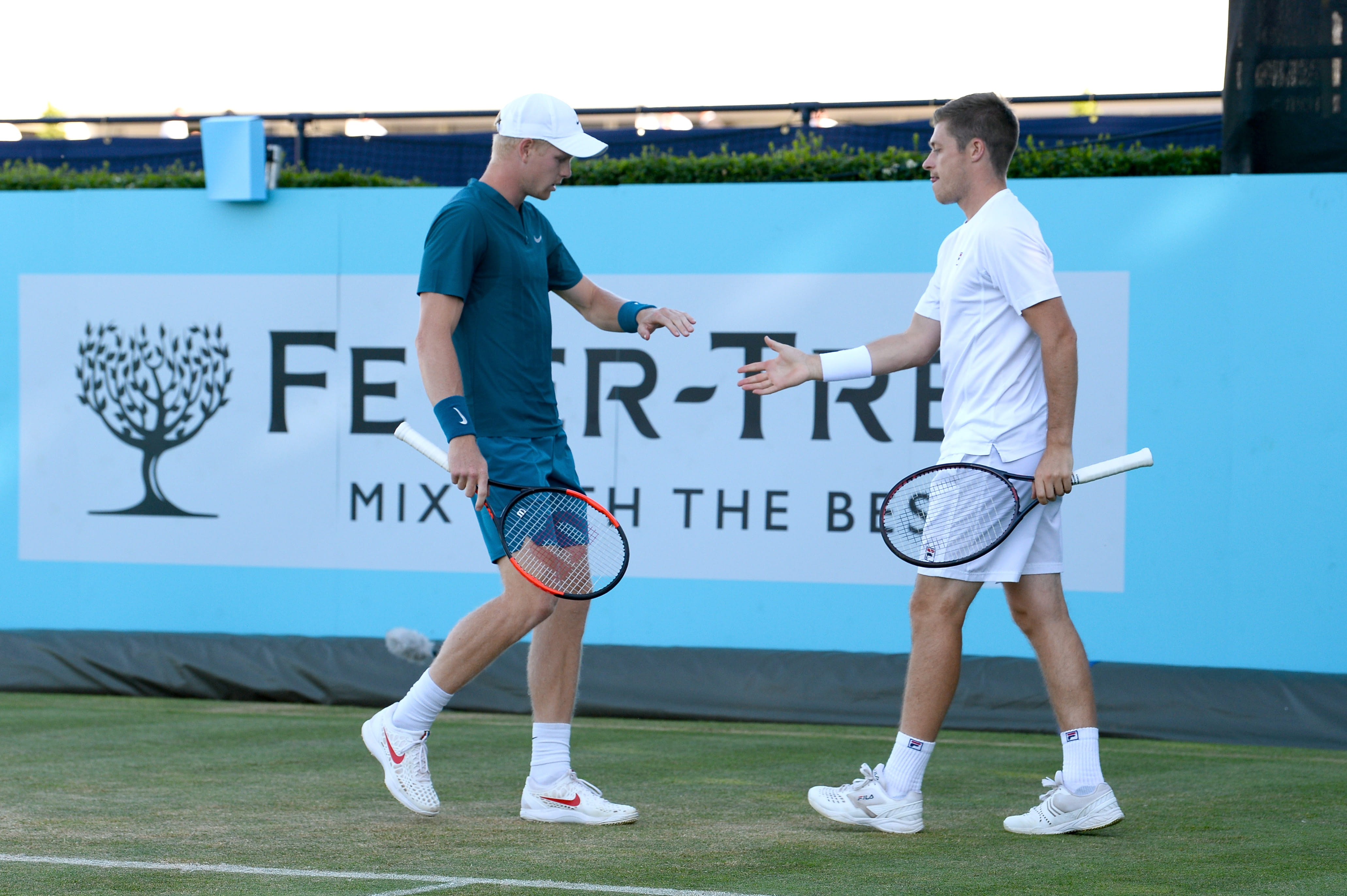 2017 was version 115 of the Queen’s Club Championships, after Queen’s signed a deal with the LTA to host the championships until 2026. Unfortunately, defending champion Andy Murray failed to defend his title for the third year running, and was in fact knocked out in the first round by Australian Jordan Thompson. Not only did Thompson impressively knocked Murray out 7-6 6-2, he was also a last-minute addition, after a late pull-out from Rafael Nadal. Whilst this was a real shock to the Spaniards, it would be Spanish professional Feliciano López that would repair the damage. Lopez only managed a marginal semi-final win over Bulgarian-born Grigor Dimitrov, at 7-5, 3-6, 6-2. However, it was the win that kickstarted the start of something special.

This was the second López/Cilic encounter in just a matter of weeks, where López suffered straight set defeats to Cilic in the third round of the French Open. In the final, it would be a tiebreaker round that would decide the champion. Despite Cilic holding match point at 6-5, and within arm’s reach of his second Queen’s title, López’s volley denied the Croatian his win and took the game to an 8-8 tie. López struck his 19th ace to meet match point – one forehand error from Cilic later, and López had taken the biggest title of his career.

Despite Murray’s very early loss in the tournament, the Murray redemption would take place in the Doubles, where Jamie Murray and his partner Bruno Soares won the title. They defeated French pair Julien Benneteau and Édouard Roger-Vasselin with a respectable 6-2, 6-3 score. 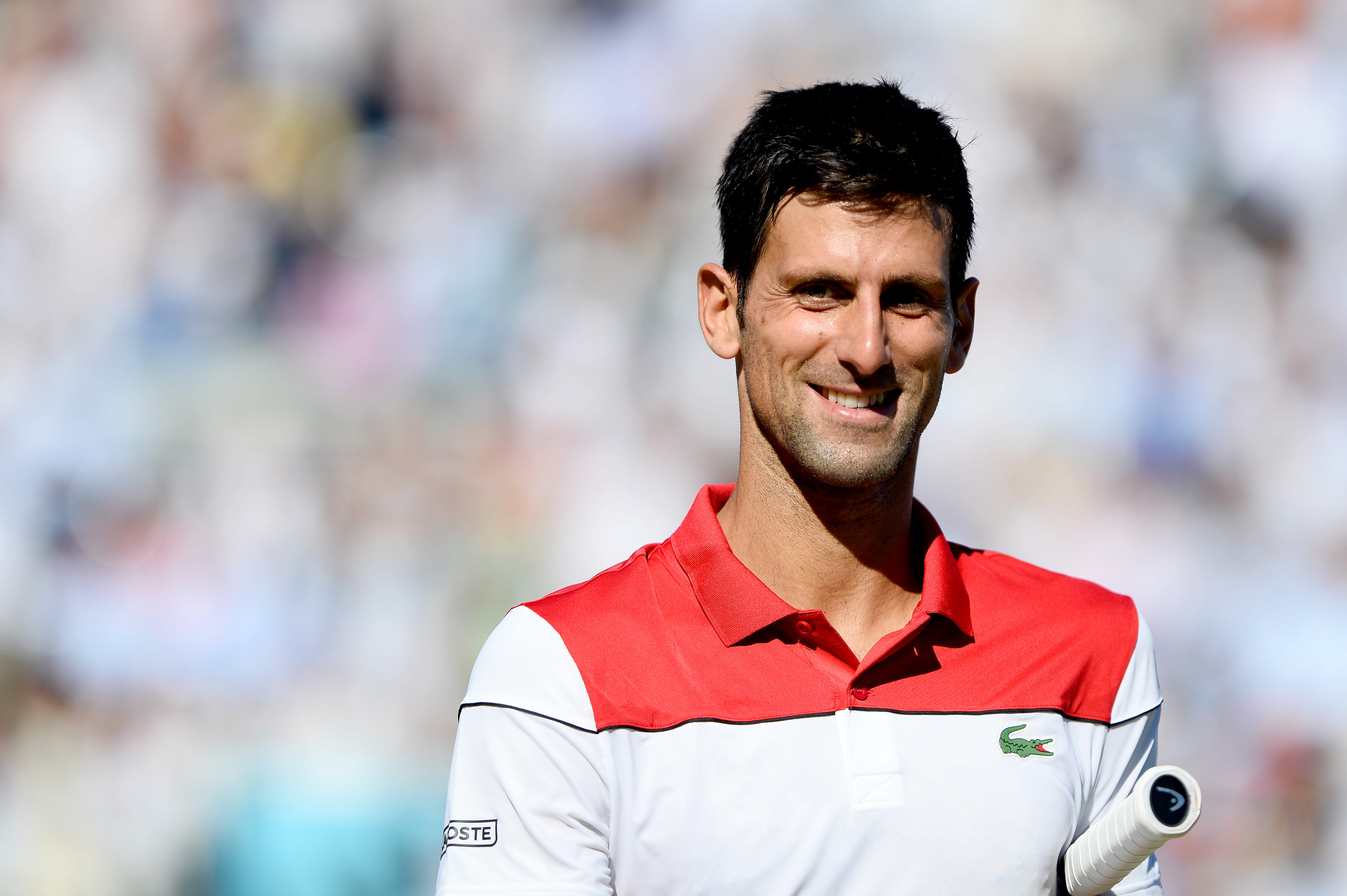 2018 was a big year for the Championships. Firstly, it marked the return of Sir Andy Murray after recovering from a hip injury. Secondly, it was the first year that the Championships were sponsored by Fever-Tree. Thirdly, it was the first year that Wheelchair Singles and Doubles made an appearance, with the Singles won by four-time Grand Slam winner Stefan Olsson, and the Doubles trophy awarded to round robin winners Stéphane Houdet and Nicolas Peifer.

As for the Singles side of the tournament, Cilic finally lifted the Queen’s trophy after his narrow 2017 defeat to Lopez. Although, his opponent did not make it easy for him; runner-up and current World No.1 Novak Djokovic was, in a fact, a tournament wildcard, and gave Cilic a run for his money. The final score was 5-7, 7-6, 6-3; despite being a match point down in the second set, Cilic was able to find an inner strength and claim his first straight victory against Djokovic in 16 matches. Whilst Cilic is the one to praise here, the Queen’s Club Championships was Djokovic’s first ATP final in almost a year. What an effort from the Serb!

Defending doubles champions Jamie Murray and Bruno Soares were asked to step down from the winners’ podium, after losing in the final to Henri Kontinen and John Peers 4-6, 3-6. The Finnish-Australian duo also denied British pair Kyle Edmund and Neal Skupski a place in the Doubles’ final, after a very close semi-final victory at 7-6, 5-7, 10-6. 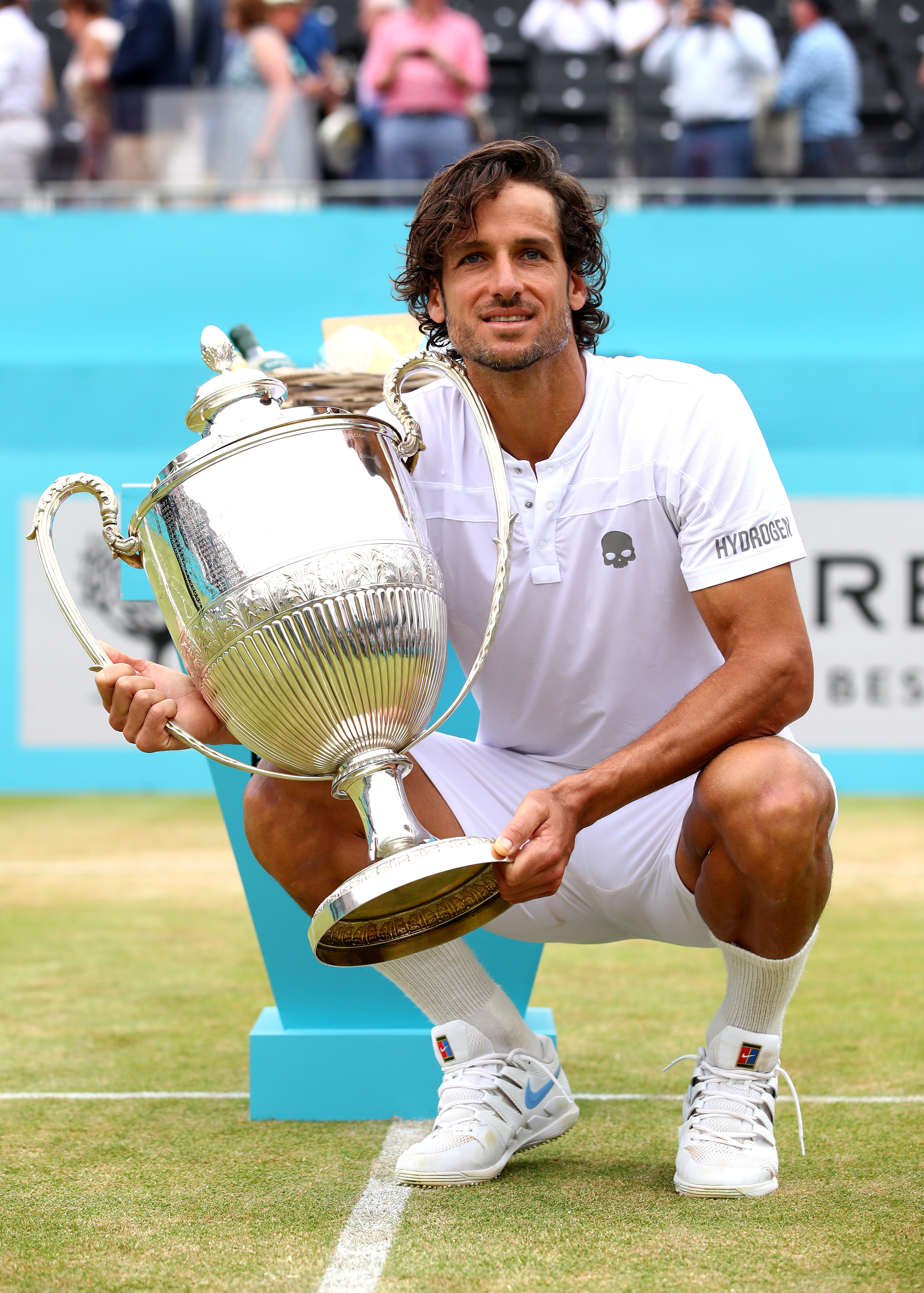 The curtains were drawn back on the London-based club for the last time in 2019, before the COVID-19 pandemic outbreak. And what a competition it was set to be for Feliciano López, who would reclaim his Singles’ title…and then some!

López was one of three Singles’ wildcards for the 117th version of the championships, alongside Brits Jay Clarke and Dan Evans. This meant that his victory, over Gilles Simon, made him the first wildcard victory for singles at Queen’s since Pete Sampras in 1999.

The 37-year-old triumphed over the former world No.6, with a nail-biting result at 6-2, 6-7, (4-7), 7-6, (7-2). His strong service game proved the difference throughout the match, as Lopez was keen to deny the Frenchman his first Queen’s victory. After clinching victory and ripping off his bandana, he was able to scream with joy and lift the Queen’s Club Championships trophy once again.

However, López’s fairy-tale ending had not come to an end just yet. He was, in fact, also a doubles wildcard, and he teamed up with Sir Andy Murray, who had made an unbelievable comeback to the tennis scene after undergoing career-saving hip surgery, in a bid to lift his second Queen’s trophy of the week. Despite only 37 minutes between his singles’ win and the start of the doubles’ final, López showed no fear and rose to the challenge in true style.

Murray and López  secured a 7-6, (6), 5-7, 10-5 victory over American-Brit duo Rajeev Ram and Joe Salisbury. It was an intense game throughout, but a wide forehand from Salisbury handed the dream pair the victory they so deserved. A dream return from Murray and a dream fulfilled by López – the true meaning of a dynamic duo was right there.

The pair certainly set the bar for the 2021 version of the cinch Championships…we can’t wait to see the tennis talent take to the courts – and we hope to see you there with us!