I don’t think I quite realised how much I’d miss the place; the sights and sounds, the uniqueness of Wimbledon.

Strolling up the hill from the station and down the other side past St Mary’s Church, I confess to feeling a touch emotional. Window displays!  Shops devastated by a pandemic proudly celebrating their local event! Banners from lamp posts! Green and purple signs of positivity, rather than blue and yellow public health warnings.

Then walking into the grounds on that first morning - the grass freshly trimmed by the whirring vintage mowers, the lines freshly painted by meticulous groundstaff, the strawberries picked and prepared, ripe and succulent. The summertime senses tested to the full and a small return to some form of normality!

Wimbledon, don’t forget, was the only Grand Slam tournament to be fully cancelled in 2020. The Australian and US Opens took place in their usual slots while the French Open was delayed to the autumn. But Wimbledon didn’t happen at all. And how we missed it.

Chatting to many of the players before the start of the tournament, it was clear they felt the same. This is a special place in the hearts of so many. No matter how many times you return, the feeling never wanes.

And then the gates opened, concourses started filling, seats started to be taken and the players started emerging; all in pristine white (kit saved for two years, one suspects!)

“Ready, play!” The calm voice of the umpire, the excitable calls of the line judges, the scurrying feet of the ball-kids. Oh, how we missed all this.

The early action competed with rain showers. Number three seed Stefanos Tsitsipas was an early casualty in round one, likewise the two-time champion Petra Kvitova. British wild-card Jack Draper showed stacks of potential in a four-set centre-court challenge to Novak Djokovic. This was shaping up nicely...

The day two story was a slippery centre court and injuries in successive matches to Serena Williams, forced to retire after just six games, and Adrian Mannarino, who was threatening to knock out Roger Federer. The courts would dry out, said the All England Club, reassuringly, with some long-overdue sun.

Just where was the sun?! By the time it belatedly joined the party, the seeds were tumbling with numbers 3 and 4 in the women’s singles - Elina Svitolina and Sofia Kenin - early casualties. 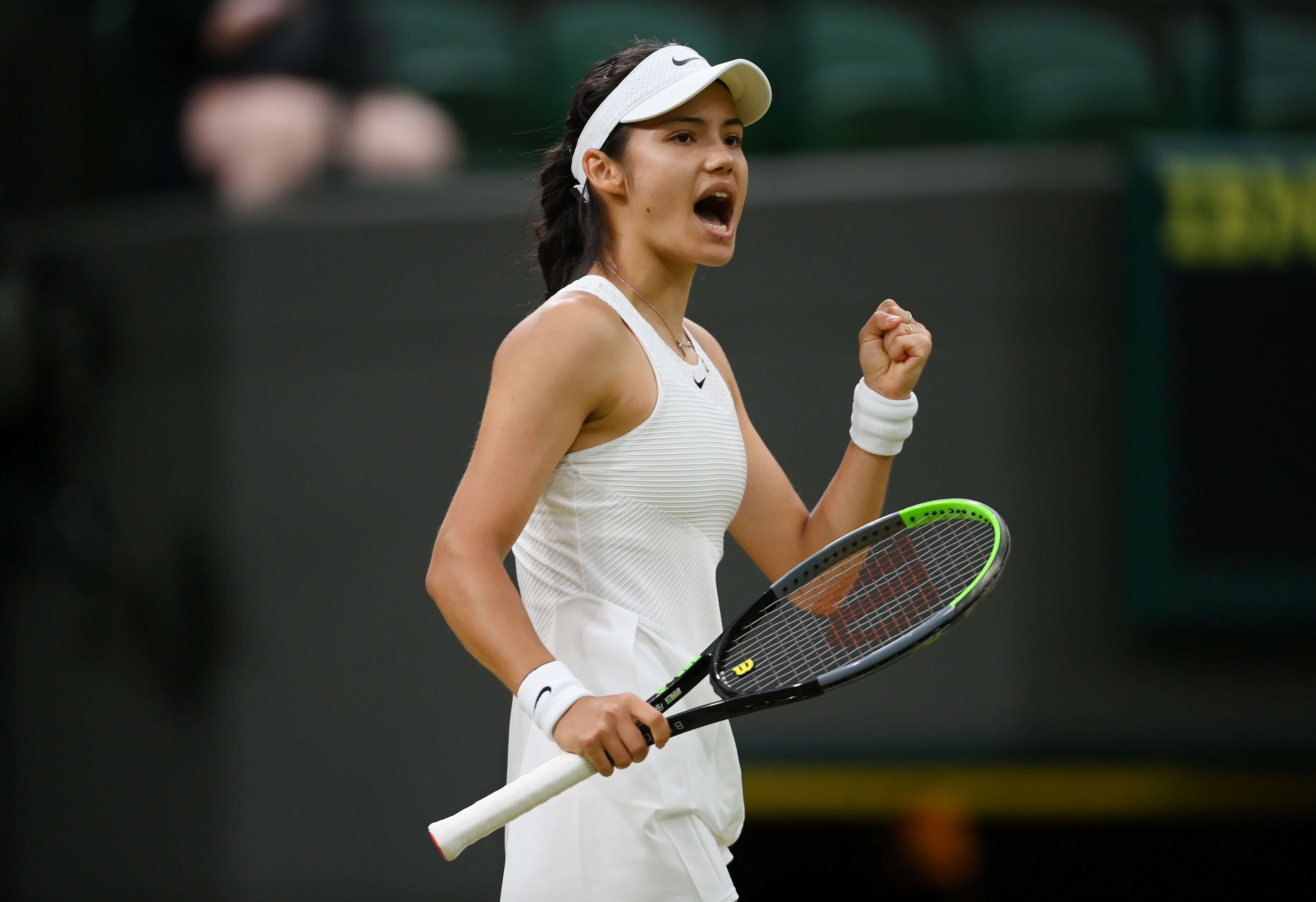 And then there was a new star; Emma Raducanu.

Well-known in British tennis circles, the Bromley teenager hit with Anne Keothavong at the age of 11 and her talent was evident then. Fast-forward eight years and she thrusts herself into the spotlight with a brand of ambitious, creative tennis, startling spectators, and an illuminating smile to embrace them.

It felt the whole nation was watching when she took out the experienced Romanian Sorana Cirstea on Court 1. This was an opponent who’d beaten a two-time Grand Slam champion, Viktoria Azarenka, in the previous round. But Raducanu marched through with a confidence belying her tender years. I watched match-point from a gangway surrounded by engrossed spectators. There’s no doubt she’s a proper talent and, despite the disappointing end to her subsequent match, she’s no one-off wild-card. We’ll be watching her at Wimbledon for many years to come.

So to the second week and a thrilling “Manic Monday”; the last such occasion with the introduction next year of play on the middle Sunday. With all last 16 matches played on the same day, crowds all around the grounds were treated to some epic battles; Karen Khachanov beat Set Korda 10-8 in the final set on Court 18, Felix Auger-Alliasime put out 4th seed Alexander Zvereva on Court 1 while over on Court 2, former French Open champion Iga Swiatek and men’s 5th seed Andrey Rublev were both knocked out. We’ll miss the frenetic, simultaneous drama of this unique sporting day when the 4th round is spread over two days from next year. 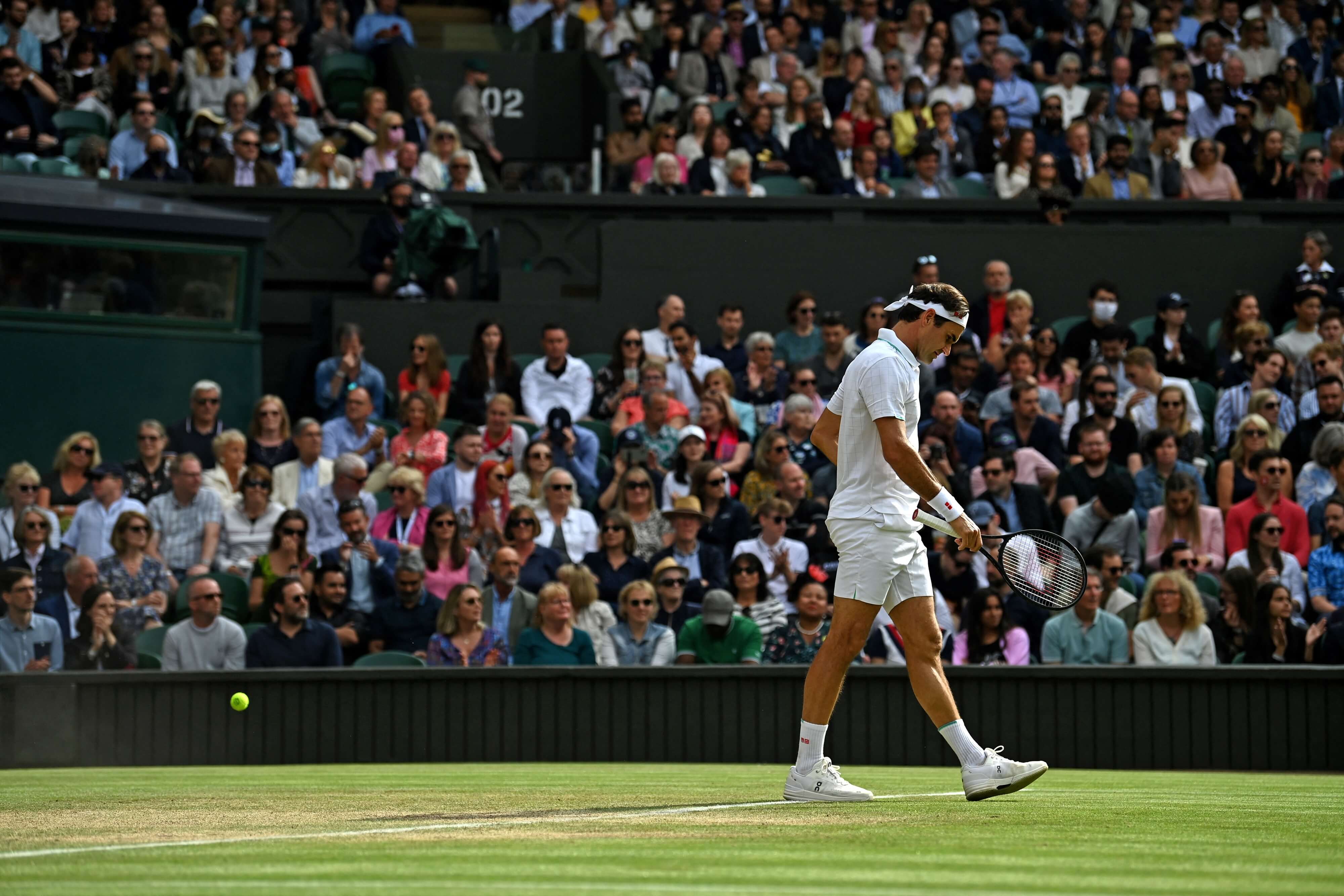 If progress on women’s quarter-final day was serene for the favourite for the title, Ash Barty of Australia, so it proved 24 hours later for Novak Djokovic; the hot pick for the men’s. And his odds-on status only hardened when Roger Federer was dumped out by Poland’s ruthless Hubert Hurkacz. Federer, 39, ignominiously lost the third set 6-0, his lack of competitive matchplay obvious for all to see. Will he win again on the SW19 lawns? Unlikely. Will he be back to play again? We dearly hope so. What a champion he is. A fully-fit Federer can still enthral into his 40s. The big question is; will he want to?

Djokovic has no such concerns. At 35, he still appears to be at his peak. It’s certainly hard to argue he’s anywhere near the downslide. As he dispatched the entertaining Canadian Denis Shapavalov, he made a third successive Wimbledon final to play Queens champion Matteo Berrettini, celebrating a first Grand Slam final appearance.

First, Ash Barty and Karolina Pliskova would contest the women’s singles final. And what an engrossing match it turned into. Whoever prevailed, a first-time Wimbledon champion would be crowned and the pair kept us guessing throughout with a series of long, angular rallies. In the end, Barty had too much guile for the Czech and the tears flowed on match-point. This is a player who took time away from the sport to try her hand at cricket. Rediscovering a love for rackets rather than bats, Barty’s rise has been incredible. A worthy champion.

Likewise the astonishing man from Serbia. As hard as Berrettini tried - and he certainly had success, especially in the first set which he claimed on a tie-break - there was no stopping Novak Djokovic as he moved onto 20 Grand Slam singles titles; level with Federer and Rafa Nadal. He’s won the first three of the calendar year - the first man since Rod Laver to achieve that feat - and now chases the proper “Grand Slam”; all four in the same 12-month period. When the US Open rolls around next month he can further establish himself as the greatest.

Because, make no mistake, we are watching the greatest male player who ever lived. Yes, many will continue to vote for Federer but it’s a vote cast on preconceptions. You can’t quibble with the facts; Djokovic is the only player to win all Grand Slams at least twice. 20 Grand Slams in total?! During a career when his two main rivals are the two previously perceived greatest players of all-time?!

Just think about that a bit more. He’s heading for 25, in my opinion. The record at the turn of the century was Roy Emerson’s 12. Pete Sampras extended that to 14 and we thought that was astonishing.  Djokovic can double a record which many felt would never be beaten. Truly extraordinary.

It was indeed an extraordinary, uplifting Wimbledon. Our senses were stretched by the enjoyment of the occasion, the thrill of the contests, the magnificence of the champions. But most of all - quite simply - by the sight, sound and smell of normal life returning, a little piece of pre-pandemic indulgence. Wimbledon is unique.  We can’t be without it again. Roll on 2022!