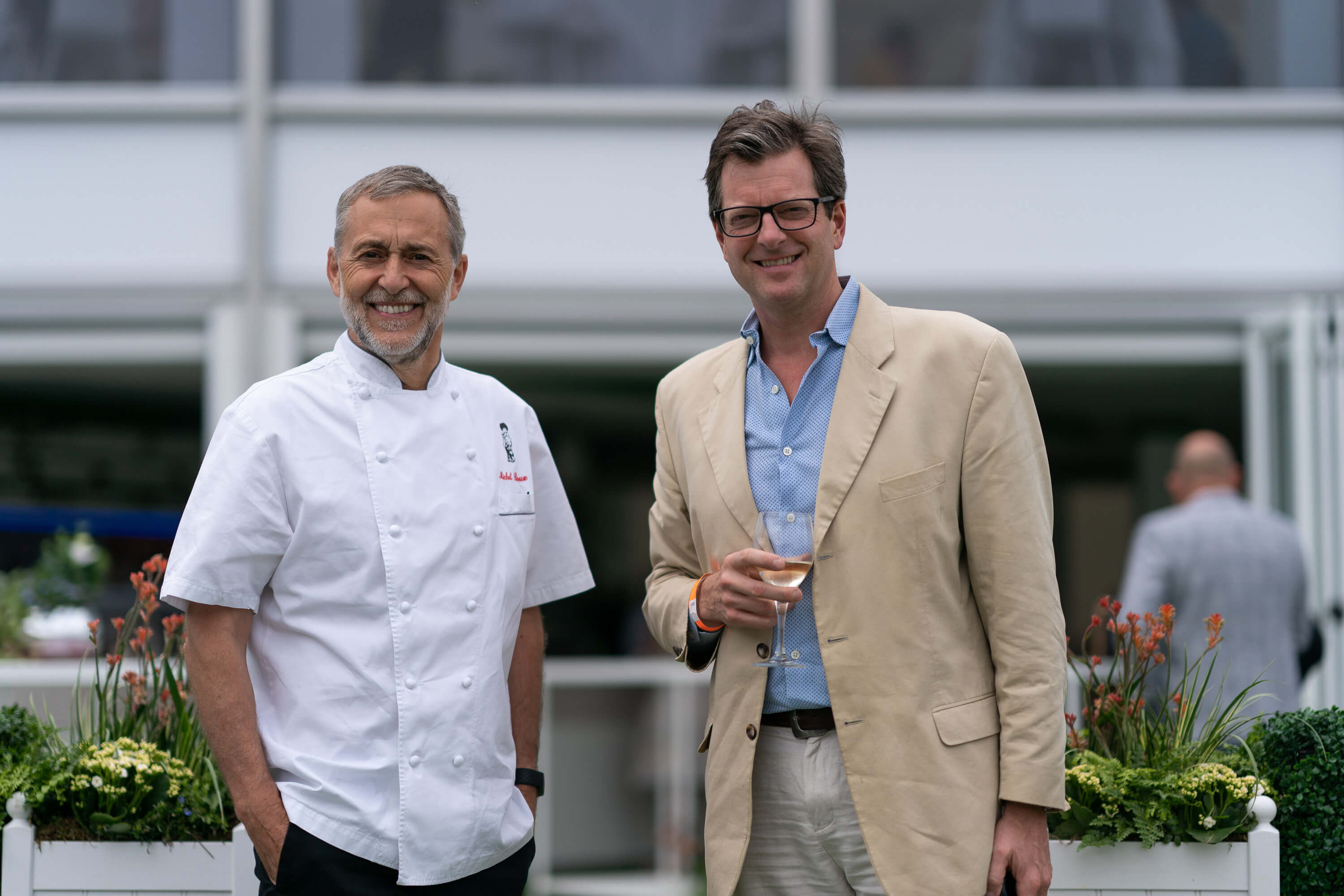 The phenomenal, two Michelin star chef Michel Roux Jr, returned to The Lawn this year for The Championships, Wimbledon, providing guests with an exceptional culinary experience. Michel always serves up a memorable dining experience and has continued to exceed expectations this year. Guests enjoyed a three course á la carte menu, an expansive seafood platter, traditional afternoon tea and of course it wouldn’t be Wimbledon without strawberries and cream! Sipping on cocktails, soaking up the sun in the garden and enjoying Michel’s sensational food were some of the highlights of the day at The Lawn.

William Sitwell was able to tear Michel away from the kitchen to talk all things food, tennis and Andy Murray’s questionable cooking skills, including Michel’s carefully thought-out planning approach to cater for 800 guests per day; a tough challenge that Michel and his team make look effortless.

Michel – No not really no, I did play a little bit of tennis as a teenager but not very good, I was always better at squash.

William – The wonderful thing about Tennis, a bit like cricket, is that it’s always got a food association. Coming here to Wimbledon, there’s Pimms, there’s strawberries, unlike cricket it’s not like everyone stops for tea – there’s lots of people who seem to eat all through The Championships and only catch a glimpse of the game, and you’re partly to blame for that.

Michel – In part I suppose but actually the food in major sporting events has improved incredibly over the last ten, fifteen or even twenty years. You can now eat well at these events, and we’ve been involved in large sporting events for many many years now and we have seen the improvement. And in many respects, it has been customer led, because people eat out on a regular basis, dine out and they think well hang on a minute – why can’t we get the same quality in big venues?

William – So let’s just explain where we are. This is an area called The Lawn, it’s not actually in The All England Club, it’s over the road by car park 5. There’s some amazing dining going on and this is all part of Keith Prowse and Compass, who you’ve been associated with for years and I know that of course your father and your uncle were very much into catering events and not just Le Gavroche and Waterside, so this is part of the DNA of Roux really isn’t it? 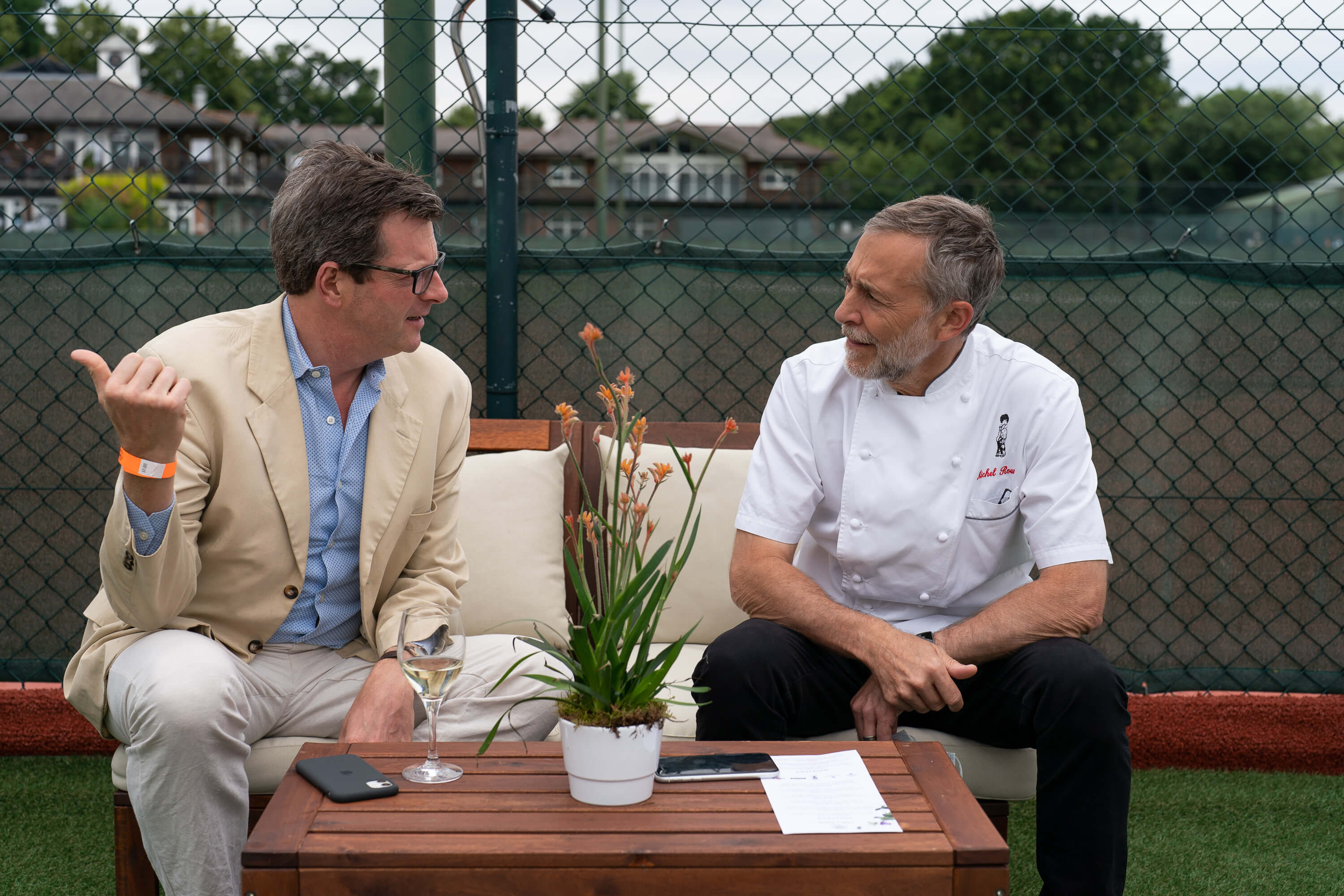 Michel – Absolutely and the association with Compass goes back not far from 40 years now, and in fact I remember working as a young chef, a young commis chef, in events and in merchant banks, people’s houses and private events; all of that for Le Gavroche and the Roux empire as it was then. And the business grew, our little catering business grew, and Compass and the Roux family joined forces and we’re still doing it now - and my daughter Emily to! It’s a family affair and myself and my dad definitely didn’t see it as a consultancy we saw it as a partnership.

William – When you’re planning to cook for several hundred people over several days, I’m sure that if you were in Le Gavroche, the menu would be very different because it’s about much smaller scale. How do you factor in your desires as a Chef to cook a certain type of food with the numbers that you have to do in catering?

Michel – Well it’s a numbers game and that’s one of the challenges that I really enjoy. But you have to just break the menu and the kitchen down into manageable numbers, so for example today we’ve got about 800 people sat down but break it up into 100 and 200; that way you can ensure quality and speed of service as well because people want to come and watch the tennis. They come here for good food, entertainment and a whole experience but they also want to go and watch the tennis, so they don’t want to be late!

William - You’ve got to rattle through a menu quite efficiently, serve the same numbers that would be piling through McDonald’s in a similar amount of time but produce a really quality offering. So, let’s get to the nitty gritty Michel. What are we eating today? What’s on offer here at The Lawn?

Michel – Well, it’s all seasonal which I think is very important and you’ve got to keep it simple. For the menu we’ve got three starters, three mains, three deserts and cheese, so that helps with service, but you’ve got to find the right balance. Quality, seasonal ingredients is vital, and not messing around too much with them. We’ve got a beautiful tomato salad with really nice, tasty, zingy dressing and just to make it a little bit different, a little bit special, we’ve got a tomato sorbet to go on top. And it’s little things like that that make the whole dish look as if its taken us hours to prepare but in actual fact its not taken that long, so it’s all visual. An almond gazpacho is also on the menu which is served with peaches which are also in season.

William – Now one of my fellow guests is the great boxer David Haye, he’s vegan, so what alternatives have you got for vegetarians and vegans?

Michel – Well the tomato salad for one is vegan. The gazpacho is vegetarian, but we can tweak that. So, we tick as many boxes as we can, and I think we tick every single box that people throw at us. It’s important to be able to cater for everyone. 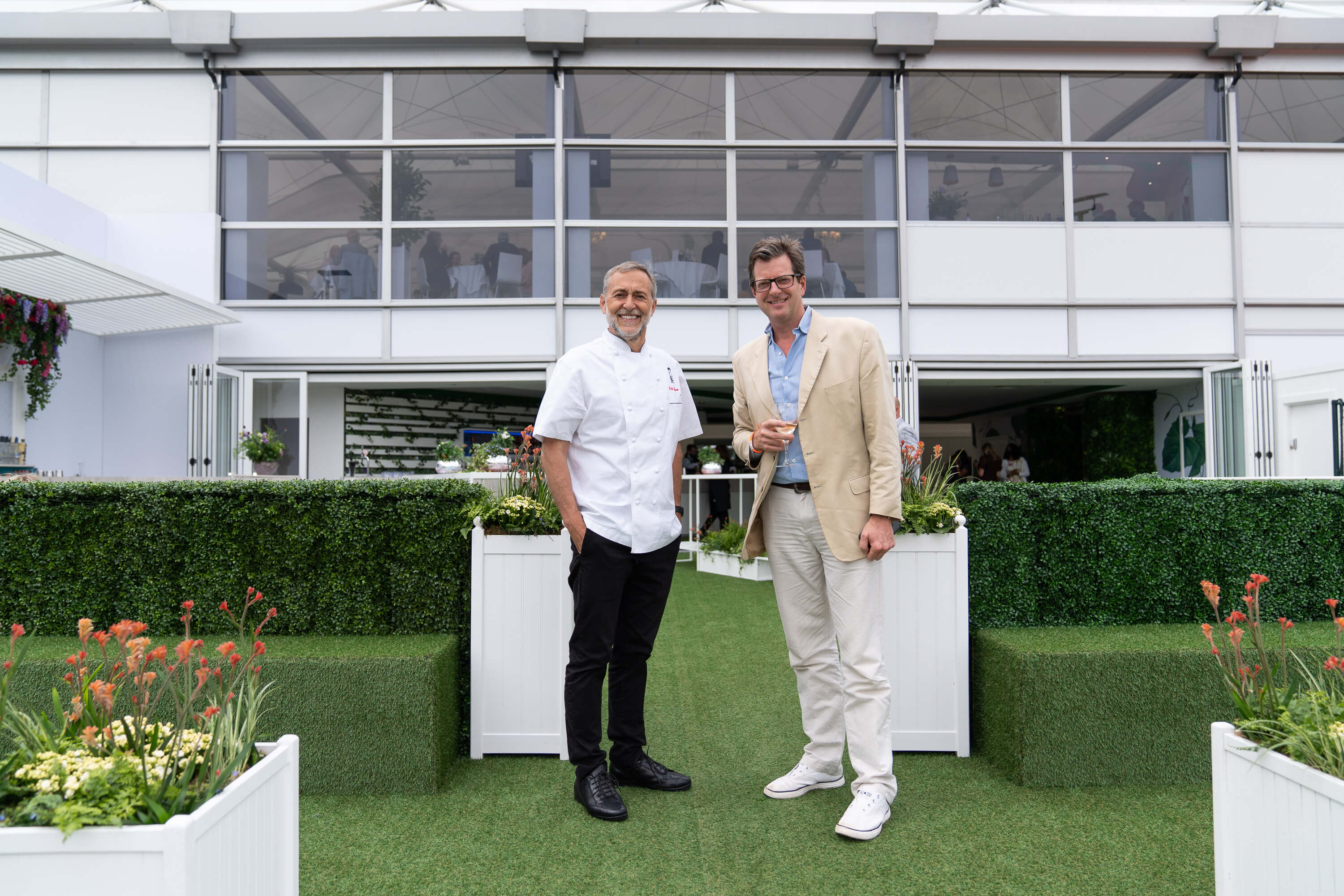 William – Now you’re obviously going to be slaving away in the kitchen here. If you could tear yourself away from The Lawn and grab a bit of tennis, who are the players that you would most love to see and love to watch in person?

Michel – Well, I think look no further than the great Andy Murray. You know that when he’s on the court there’s going to be drama, excitement, shouting and fist punching and all of that and he’s one of Britain’s treasures. I think had he been born in another era he would have been champion many many times over but he’s a class act and a really good guy as well.

William – Have you ever cooked for him?

Michel – Yes! I have many times and he’s a self-confessed, well, he’s useless in the kitchen shall we put it that way and he knows it, and doesn’t pretend to be, but my word he is a good tennis player!

William – Well look, you’ve whetted my appetite for a bit of tennis and definitely for a bit of lunch. It’s been fantastic seeing you here at The Lawn. Thanks very much Michel.

To take your experience at The Championships, Wimbledon to the next level and to find out more about The Lawn and our other award-winning hospitality facilities here.