What a year it has been for British tennis players. From Emma Raducanu rising to fame and making history to watching Cameron Norrie claim the first big win of his career, 2021 has certainly got better and better for British Tennis.

While several Brits fell victim to injuries and COVID-19 throughout the year, many returned to the courts to fight for the titles. 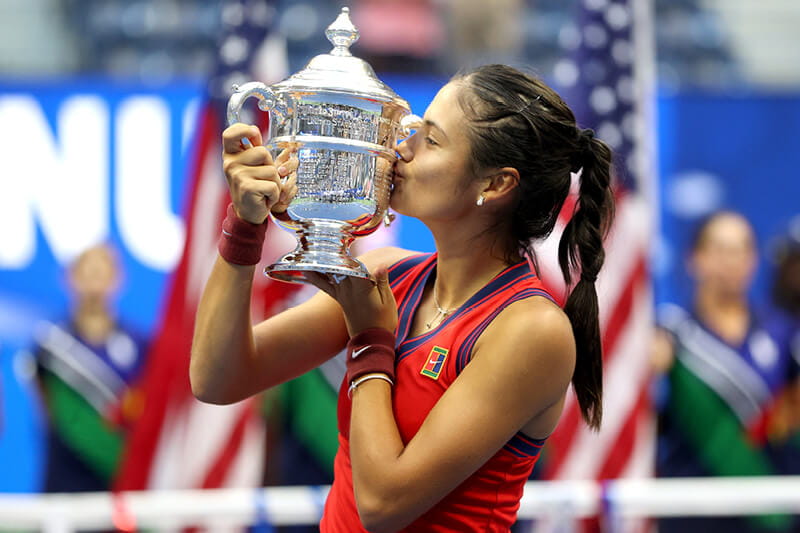 Just weeks after finishing her A-Levels, Emma Raducanu won the British Tour title at Felixstowe. With the grass season in full swing, Emma went on to receive a wild card from the LTA to compete in the Viking Open in Nottingham. Shortly after, the 18-year-old received another wildcard, this time for the world-renowned Championships, Wimbledon, where she made her Grand Slam debut. After playing some confident and impressive tennis in her first few matches, Emma quickly became a household name and was winning the hearts of many. To everyone’s amazement, Emma stormed through to reach the fourth round, making her the youngest British woman to progress to the last 16 in the Open Era.

After Wimbledon, Emma competed in the WTA 125 tournament in Chicago, narrowly losing in the final, but kept momentum high to play in the US Open. Emma’s calm composure carried her through the tournament despite her lack of experience at Grand Slams. The grand final was soon upon her, coming head-to-head with Leylah Fernandez in a gripping match. In what was a historic and inspirational journey, Raducanu became the first ever qualifier to reach a Grand Slam final. She then went on to become the first British woman to win a singles title since Virginia Wade in 1977 after claiming victory against the 19-year-old Canadian, defying all odds. Raducanu has reignited faith in British women’s tennis and has inspired people of all ages with her amazing performance.

Having had two hip surgeries in the last three years and a groin injury, Murray has remained strong to continue his career this year. After missing out on the Australian Open due to contracting COVID-19, Murray went on to reach the final of the Biella Challenger tournament in Italy. As a five-time champion at The Queen’s Club, Murray had hopes of a sixth title, but struggled to progress and missed out on a quarter final place to eventual champion Matteo Berrettini. His spirits remained high as he returned to the esteemed courts of Wimbledon, beginning his journey by defeating the 24th seed. Murray’s hopes of progressing were soon shattered as he was defeated by Denis Shapovalov.

The 2020 Tokyo Olympic Games began shortly after. Murray and doubles partner Joe Salisbury headed out to Japan to claim victory for Team GB, putting up a fight in their matches leading them to the quarter finals. Unfortunately, the duo were then defeated.

The US Open was short-lived as he was defeated by 3rd seed Stafanos Tsitsipas, after playing a match filled with tension and animosity resulting from the Greek’s long breaks in play. The Indian Wells saw Andy reach the third round, pushing Zverev to his limits, but blamed his inconsistency for not being able to get an advantage over the German. 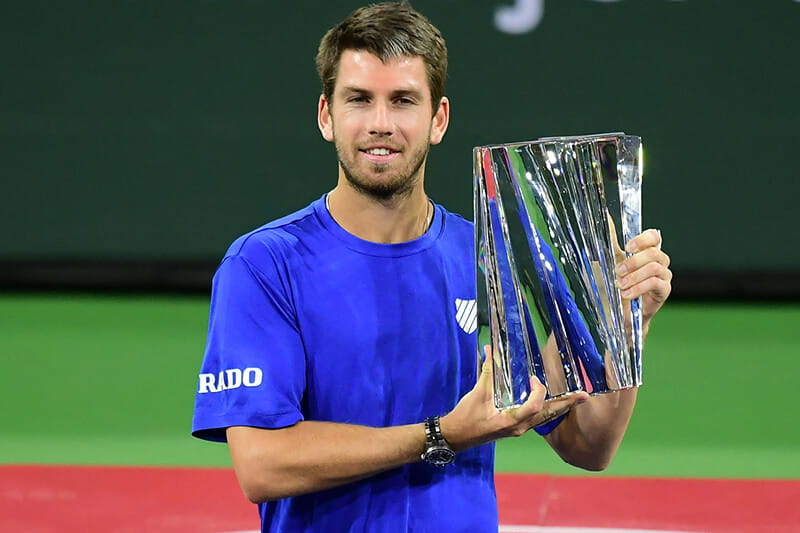 Norrie has been playing frequently throughout the year, and had a total of 47 wins, 20 of which were against a higher rank. He successfully reached the final of the cinch Championships at The Queen’s Club in June, but narrowly missing out on the title to Matteo Berrettini, giving him great confidence at Wimbledon. The 25-year-old Brit went on to face the one and only Roger Federer, who sadly brought his Wimbledon journey to an end.

The British No.2 sadly fell at the first hurdle in the US Open and went out in the first round to Spanish teenager, Carlos Alcaraz, not allowing enough time to show his full potential.

However, it was a different story at the Indian Wells Masters. After waiting so long for the first big win of his career, Cameron Norrie has finally been able to lift the trophy. The BNP Paribas Open saw the Brit play a higher level of tennis than ever before. He has made history and is now the first British man to win the title at the fifth biggest annual tournament on the planet, commenting in his post-match interview: “I’m so pleased to win my biggest title.” The win over Nokoloz Basilashvili has made it Norrie’s second career ATP title and has since rocketed from 71 at the beginning of the year to 15th in the world rankings, and the new men’s British No.1.

The former men’s British No.1 started 2021 with his first ATP Tour title win at the Murray Rover Open in Melbourne in February to reach a career high ranking. He was beaten in the first round of the Australian Open by fellow Brit, Cam Norrie, but reached the doubles final of the Monte-Carlo Masters with partner Neal Sukispski. Evans also had the biggest win of his career to date in Monte-Carlo, beating World No.1 Novak Djokovic in straight sets. Dan went on to reach the quarter finals of the cinch Championships, but sadly didn’t progress. His stint at Wimbledon was also cut short, reaching the third round before losing to Sebastian Korda.

Like many players, Evans missed the Tokyo 2020 Olympic Games due to contracting COVID-19. However, the US Open looked promising as he was seeking to reach his first Grand Slam quarter final where he faced 2ndseed Daniil Medvedev in the last sixteen. After a strong performance from Medvedev who defeated Dan, he still looked at the positives and reached a career-high ranking of No.22 after the Grand Slam. The 2021 Indian Wells saw Evans get through to the third round before falling to Diego Schwartzman after a strong performance. 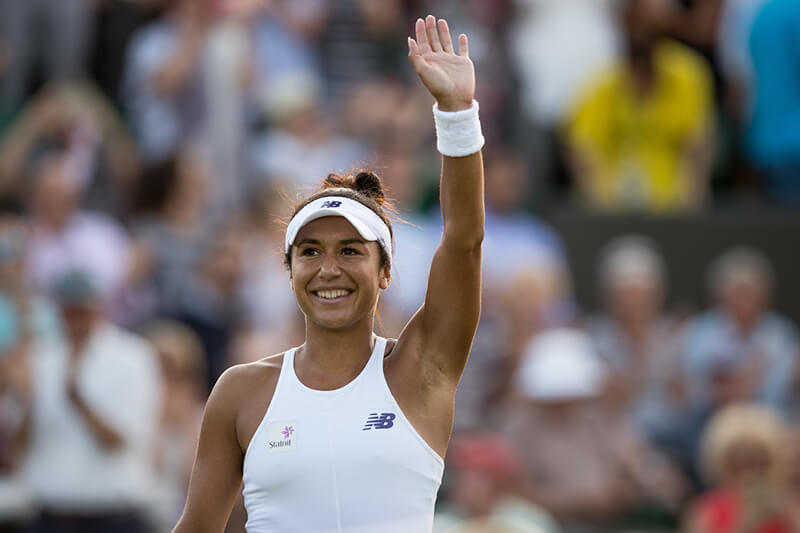 Watson started 2021 by playing in Abu Dhabi and the Australian Open but she wasn’t able to progress as far as hoped in either tournament. In April, Heather led the British Billie Jean King Cup to success over the Mexican side but lost her first round match at Roland Garros in May. In preparation for Wimbledon, the Brit went to the Viking Classic in Birmingham where she successfully reached the semi-finals before being defeated. Watson’s time at Wimbledon was short as she was defeated in the first-round by America’s Kristie Ahn. However, she went on to compete in the ladies’ doubles tournament with partner Harriet Dart.

Watson became a three-time Olympian as she represented Team GB in the Tokyo 2020 Olympic Games. Watson was left without a doubles partner after Johanna Konta contracted Coronavirus and had to pull out, and lost her first-round singles match.

The US Open saw Watson take on Kaja Juvan in the first round but resulted in a victory for the Slovenian sending Heather out of the tournament in straight sets.

After pulling out from the Viking International Eastbourne due to a knee injury, hopes of returning to the grass courts of Wimbledon vanished as Konta had to pull out on the eve of the tournament due to a team member testing positive for COVID.

Johanna was set to head out to Tokyo for the 2020 Olympic Games, but to her disappointment contracted coronavirus and wasn’t able to go. Since then, Konta has had to pull out of the US Open with a thigh injury, hours before play. It’s been a rocky ride for Johanna since reaching the US Open quarter finals in 2019, and a difficult year. Since Emma Raducanu’s US Open victory, Konta has dropped from women’s British No.1 to No.3 and 82 in the WTA rankings. We’re hoping that she will come back in fighting force in 2022, returning to her home turf at Wimbledon to work her way back to the top.

We’re hoping to see a strong British line-up at the cinch Championships and The Championships, Wimbledon 2022.

Find out more about our hospitality experiences to elevate your day at the tennis by visiting our website.