If you’re up to date on your England Rugby knowledge, then you’ll know that Canada are heading to the capital, at Twickenham Stadium, this July as part of the Summer Series. Canada are heading across the pond to see whether than can beat the hosts at the home of England rugby. In preparation for the summer showdown, here’s a look at rugby in Canada.

The first game of recorded rugby took place in Montreal in 1864, however there is considerable overlap with Canadian football. In fact, confusingly, Canadian football is often referred to as ‘rugby football’, however others call it a ‘radical departure from rugby’. (If anyone knows the real difference, we’re all ears!)

The earliest clubs were recorded as Montreal FC (1868), Halifax FC (1870) and Vancouver (1889), with rugby remaining most popular today in British Columbia, perhaps due to its strong international appeal through world-renowned universities such as University of British Columbia. Furthermore, with Canada’s French-English influence, it has long been influenced by the Commonwealth and French-Canadian rugby community.

Aside from domestic rugby, Canada’s first prominent break into the sport came about in 1991, after outstanding performances against Romania and Fiji, and narrow losses against France in the group stage, and New Zealand in the quarter finals, of the 1991 Rugby World Cup. Since then, they’ve only managed a handful of World Cup game wins; for example, they have beaten Romania (1995), Namibia (1999) and Tonga (2003 and 2011).

Currently, the country boasts 324 clubs, with nearly 30,000 registered adult players. Despite climate issues, such as heavy snow and ice, leading to split seasons, the sport is gaining popularity – a similar revolution in response to the upcoming presence of rugby in America. Rugby Canada, the current governing body for Canada’s rugby union, receives support from various government levels, agencies and World Rugby, thus explaining rugby’s year on year growth in popularity. In fact, Rugby Sevens has been hugely popular among both men and women, showing success for both programmes – the women’s 7’s team claimed a Bronze medal in the 2016 Olympics in Rio.

Of course, with a vast population and constant funding, Canada have produced some world-class players over the years. You may recognise a name or two…

Al Charron: arguably one of the world’s most dominant and iconic forwards of all time, Al Charron was so great that he rotated between numbers four to eight for his country. His record for most Canadian caps (a whopping 76) wasn’t able to be beaten until 2017, and his four World Cup appearances for his country isn’t something to be overlooked. He was also a leader, playing captain for Canada’s national team 25 times – another record, however this one remains unbeaten. The Ottawa native was both feared and admired by his opponents, for his high work-rate and ruthless attitude for the game. Charron made appearances for Barbarians, Moseley and Bristol, and remained a fan favourite in all three clubs. It would be simply disrespectful to write this piece without a mention of this legend. 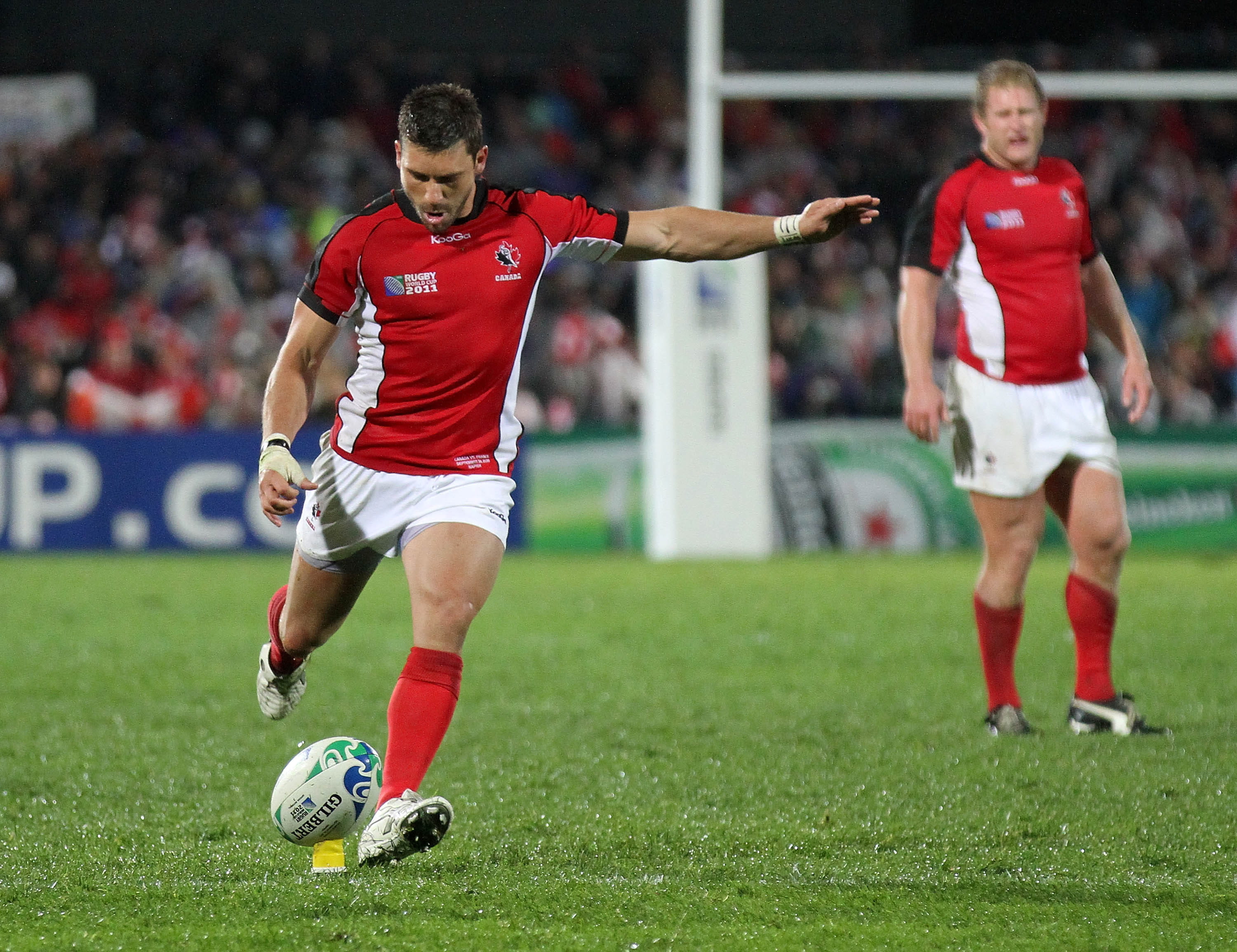 James Pritchard: whilst perhaps a late entrant into the Canadian national team, due to his already established career in Australia, Pritchard came to Canada to pursue a place in Canada’s line-up for the 2003 World Cup. He managed to score a handful of conversions in the tournament, however, would blossom in 2006, scoring a Canadian record of 29 points in a World Cup qualifier against Barbados. He once again surpassed his record a year later, amassing an exceptional 36 points from three tries, three penalties and six conversion against the USA in a 2007 World Cup qualifier. No wonder he was voted Canada’s Player of the Year that year. The fullback sits comfortably in a number of Canadian rugby records, including the most points ever scored by a Canadian (607), the 3rd most tries (18) and the most points ever in a match (36 against the USA, 2006). His retirement was a huge blow for Rugby Canada in 2019, but he could certainly hang up his boots knowing the immense impact he has had. 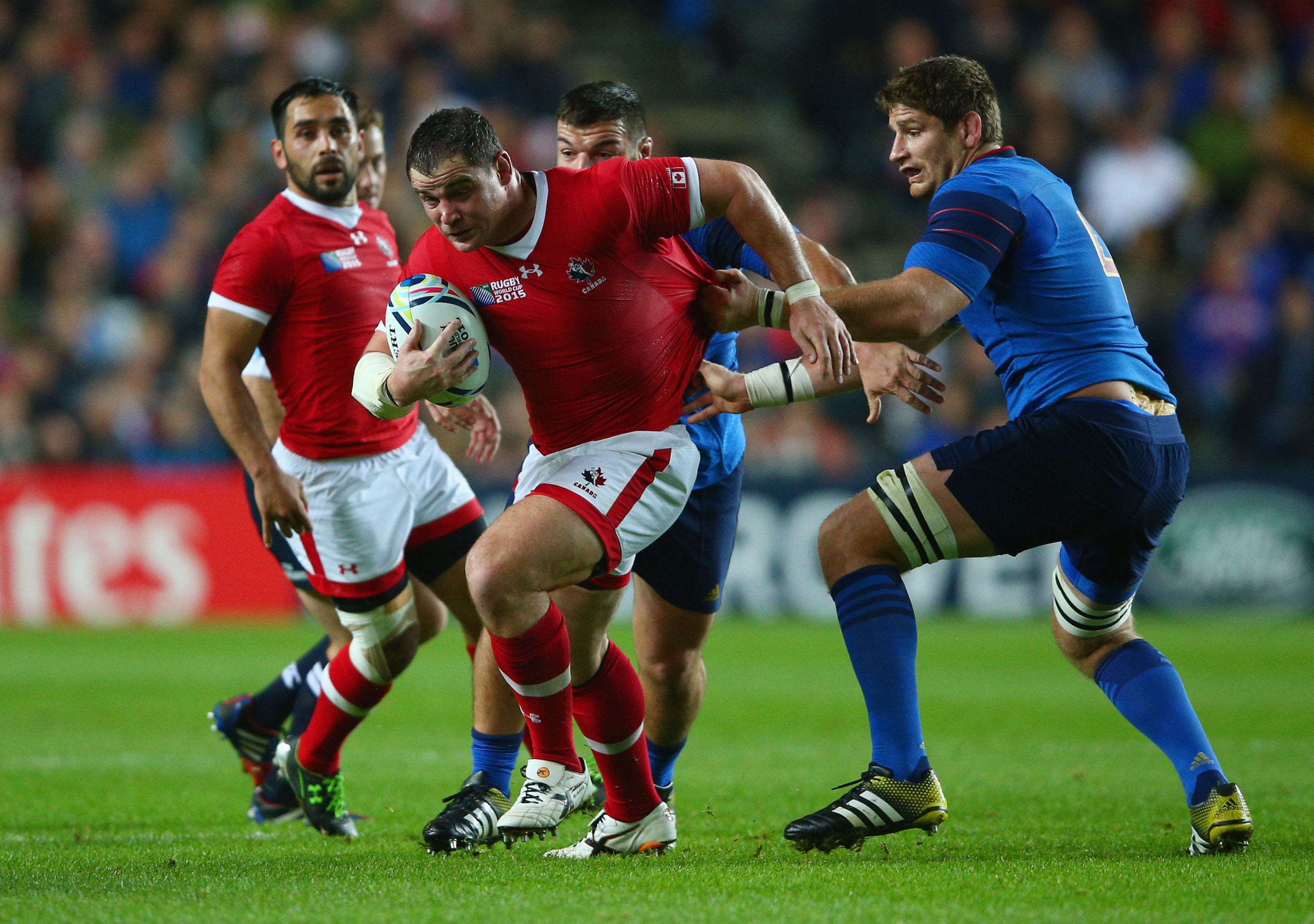 Aaron Carpenter: although now retired from the game, Carpenter made serious impact on England’s domestic rugby. He made his debut at Coventry, where he scored 35 points and made 25 appearances in the 2009-10 season. He mved onto Plymouth Albion for three years, before making a leap to the second level of the rugby union pyramid in 2013, where he joined Cornish Pirates. Whilst his time at London Welsh and Doncaster Knights was short, his time playing for his country certainly wasn’t. Carpenter became Canada’s international cap leader in 2017, after making 77 appearances, including three in the 2007, 2011 and 2015 World Cup tournaments. Known for his reliability in the back row, he certainly made himself a problem that his opponents had to overcome – and he never made it easy for them. A true inspiration for rugby players, followers and fans worldwide in our eyes.

Whilst the Canadian rugby roster is yet to be announced, you can keep an eye on some big names in the meantime. South African-Canadian weapon D.T.H. van de Merwe is the epitome of all-round talent with his ability to play almost any position to a degree of class. 35-year-old and 73 Canadian-cap star Ciaran Hearn puts the ‘pro’ in professional rugby with his strength and passion for the game. Meanwhile, scrum half Gordon McRorie has seven years- experience in playing for his nation; his highly respectable 283 points for Canada is certain to increase with his thirst for conversions and penalties.

England vs Canada with be a battle of the Jones’ – Canada head coach Kingsley Jones will look to use the game against England, current World #3, to prepare for upcoming Rugby World Cup 2023 qualification matches later in the year. And, of course, Eddie Jones’ side will look to redeem themselves after a very average display at the Six Nations back in March. So, who are you putting your bets on?