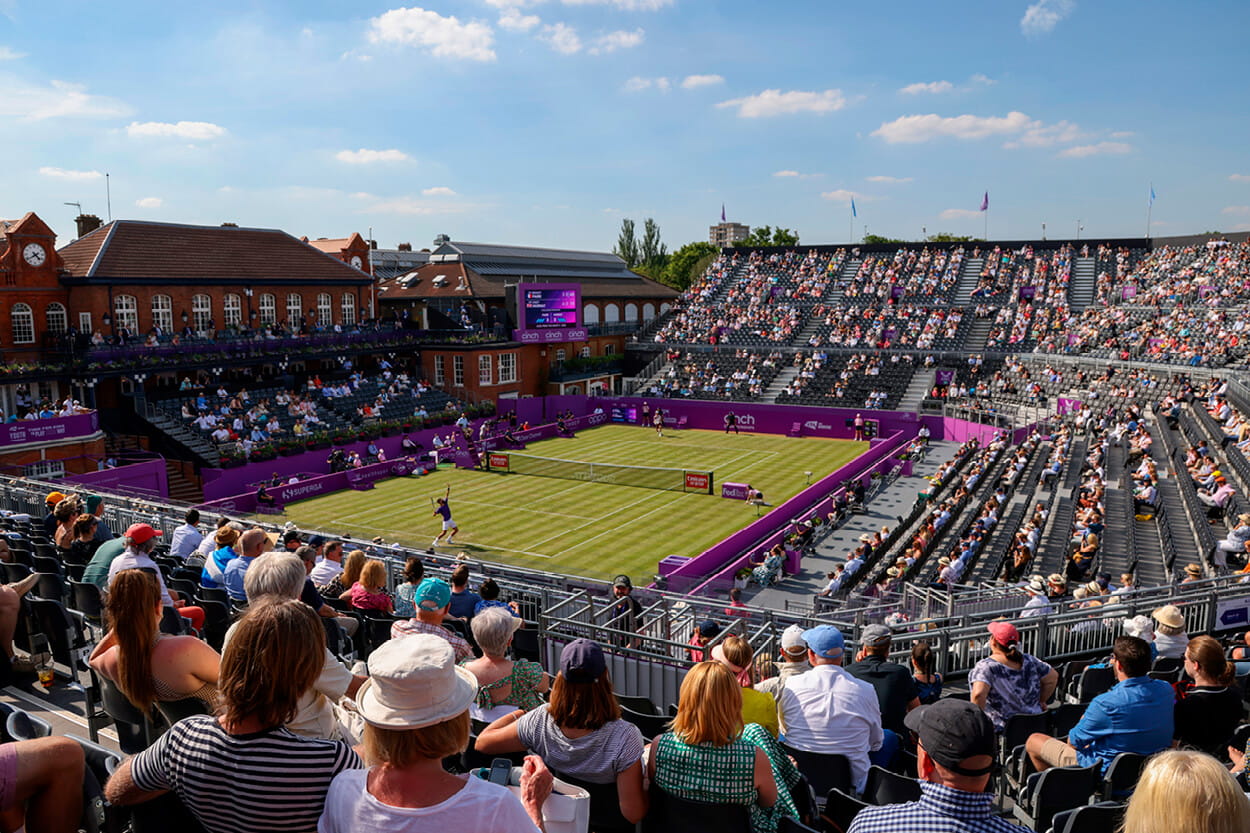 We always used to think the speed gun at Queens Club was faulty. Naked-eye serves around 135 mph would be clocked into the 140s. It became a running joke. When Andy Roddick won the US Open in 2003, devastating first deliveries firing down, none zoomed close to 153 MPH, the speed he registered the following summer at Queens, a world record at the time.

In reality, the beautiful centre court at Barons Court has always played super-fast and there's nothing wrong with the technology! The ball simply fizzes off the slick turf, always has done, and it's one of the reasons why Matteo Berrettini, the explosive Italian, is the winner of the cinch Championships and one to watch at Wimbledon.

Hitting 19 aces in the Queens final, avoiding a break point, and dropping serve only twice in five matches across the whole tournament, Berrettini harnessed the classic grass-court combo of big serve / big forehand to win on debut, following the achievement of a 17-year old by the name of Boris Becker.

Ah, the summer of 1985!  Who can forget Becker, with his floppy blonde hair, crazy diving volleys and tight white shorts, coming from nowhere to win Queens and then, three weeks later, becoming a spectacular first-time Wimbledon champion! 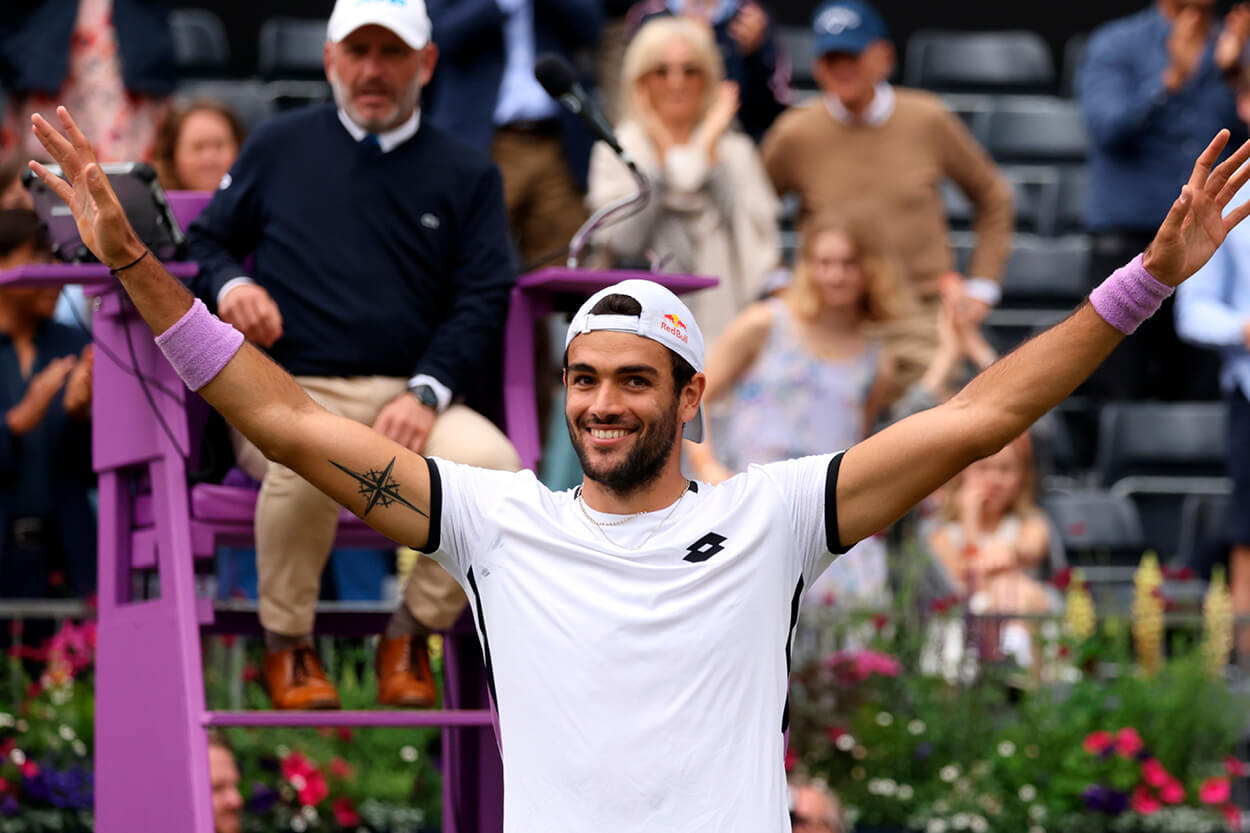 Berrettini is older, 25, and no Becker. We won't see him commanding the net like the German, those days are gone, mainly because of the string technology allowing so much more topspin from the back of the court, but he does have a game for grass. Winning a first ATP title on the surface (the first Italian to win Queens in the open era) should give him confidence to go deep into the second week at the All England Club. The ball doesn't fly as quickly at SW19, holding up on the court a little more, but Berrettini - fresh from a quarter-final appearance at Roland Garros - should have more than enough fire power for most others.

When you look around the world's top 10, he's better placed than most. Players such as Andrey Rublev (never previously beyond the 2nd round), Daniil Medvedev (3rd round), Alex Zverev and Dominic Thiem (both 4th round) are world class players but without much grass court style or pedigree. All should enjoy their time on the greensward more than they appear to.

Stefanos Tsitsipas, the flamboyant all-court Greek with the single-handed backhand, I see as an exception. His huge breakthrough at the French Open, making a first Grand Slam final and storming into a two-set lead against Novak Djokovic, sets him up well for a Wimbledon challenge. I've long believed we're looking at a future Wimbledon superstar, not just because of his uncanny resemblance to Bjorn Borg. This year? Perhaps a bit soon for the 22-year old.  Djokovic's Paris comeback proved, if nothing else, what a huge gulf exists between winning best-of-three and best-of-five set matches.

So who else? With Rafael Nadal opting to miss Wimbledon and the Olympics, an understandable schedule break after pulling up lame (by his standards) in his epic Paris semi-final, only three Wimbledon champions are in the 2021 draw.

Sir Andy Murray makes it to the start line courtesy of a wild-card. At Queens, we saw how much this sport means to him. He loves tennis so much. He loves the job, he loves entertaining, he loves winning. He gets it. Not long remains of this proud career so let's savour every moment. Perhaps even a single win would mean as much as a third title. Small victories can be multiplied by ten when you're playing with a metal hip and insomnia thanks to four young kids at home. 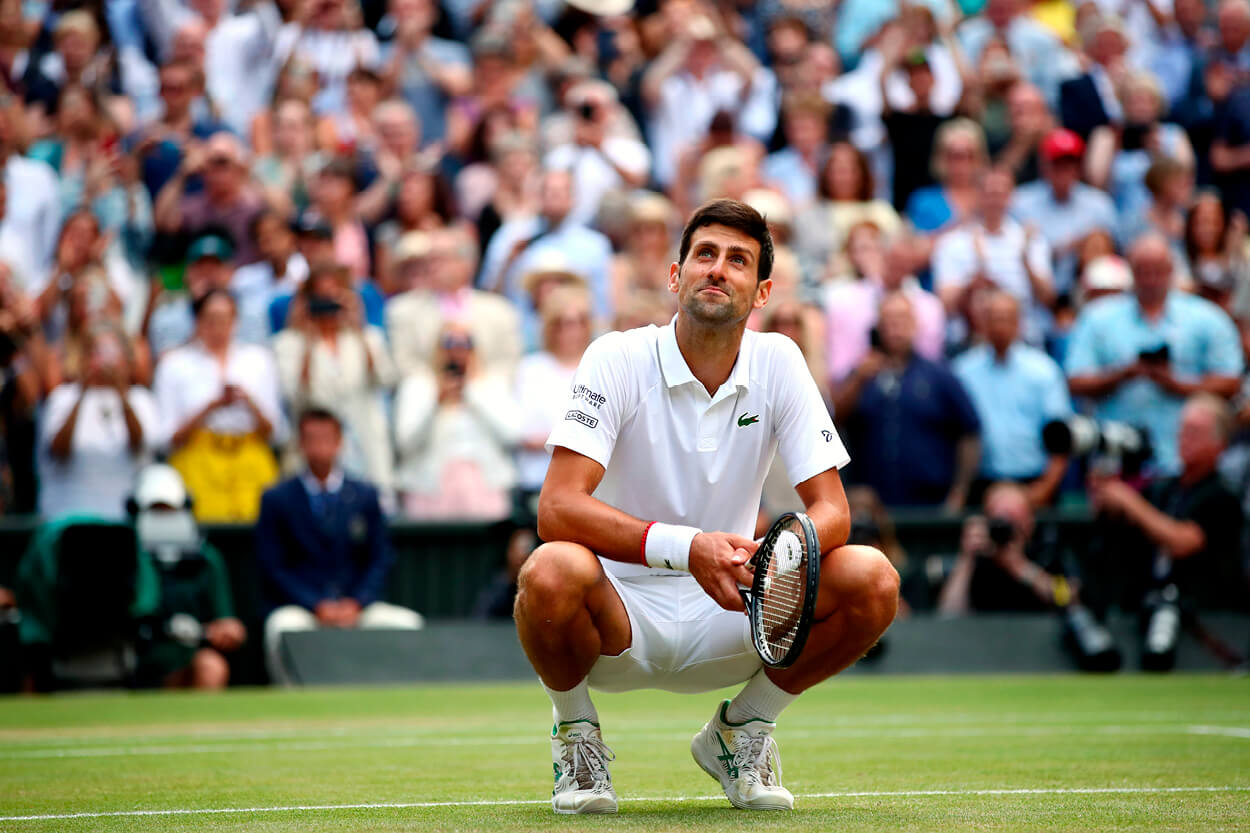 Novak Djokovic arrives in Murray's backyard as a 19-time Grand Slam champion, the top seed and, by some distance in my opinion, the favourite for the men's singles title. His achievements get more astonishing by the week. The maestro from Serbia has claimed every Grand Slam title at least twice and boasts a winning record against all his main rivals.  Should he win Wimbledon and the US Open, he will hold the "Calendar Grand Slam", tennis' ultimate individual achievement, setting a new all-time record mark in the men's game of 21 Grand Slam titles. We need to stop and think about this. Throughout his career, his two main rivals have been the two players generally considered the greatest of all time. And he has beaten them both consistently and, now, is on the verge of outscoring them; unthinkable!  Incredible!

Which leads us to a chap called Federer. You may have heard of him?

Roger Federer, the Swiss role model, is desperate to win another major championship before he turns 40 in August. He's clinging onto his position at the top of the Grand Slam charts by his fingernails. Djokovic is coming for him, he knows that all too well. The chances of him adding to his tally of 20 are getting slimmer and slimmer. Is it possible? Only at Wimbledon, surely. It's the surface which brings the best from his game and reduces the strengths of some of his rivals. He came to close to Djokovic in that ridiculous final of 2019, which ended almost simultaneously with the Cricket World Cup final, you'll remember, but not close enough. If they meet again, I'd be amazed if it proved as tight.

Almost as exciting as the quest for all-time greatness, the potential challenge of leading British players Dan Evans and Cam Norrie. I'd love to see both make the second week; I think that should be a realistic aim. Evans has won a title this year (in Melbourne) and always looks in command of the grass courts. Norrie, fresh from the Queens final, his 3rd of a sensational season, has proved he can mix it with the best.  He gave Nadal a good fight at Roland Garros. Both will be seeded, which is a remarkable achievement. I'm going to go out on a limb and suggest one of them will make the semi-finals. They're more than capable! Which one? Who cares! Get those flags at the ready...

The women's championship is wide open. World number one Ash Barty, another of the walking wounded, pulled out of her second match at Roland Garros with a hip injury. It would be a surprise to see her challenge. 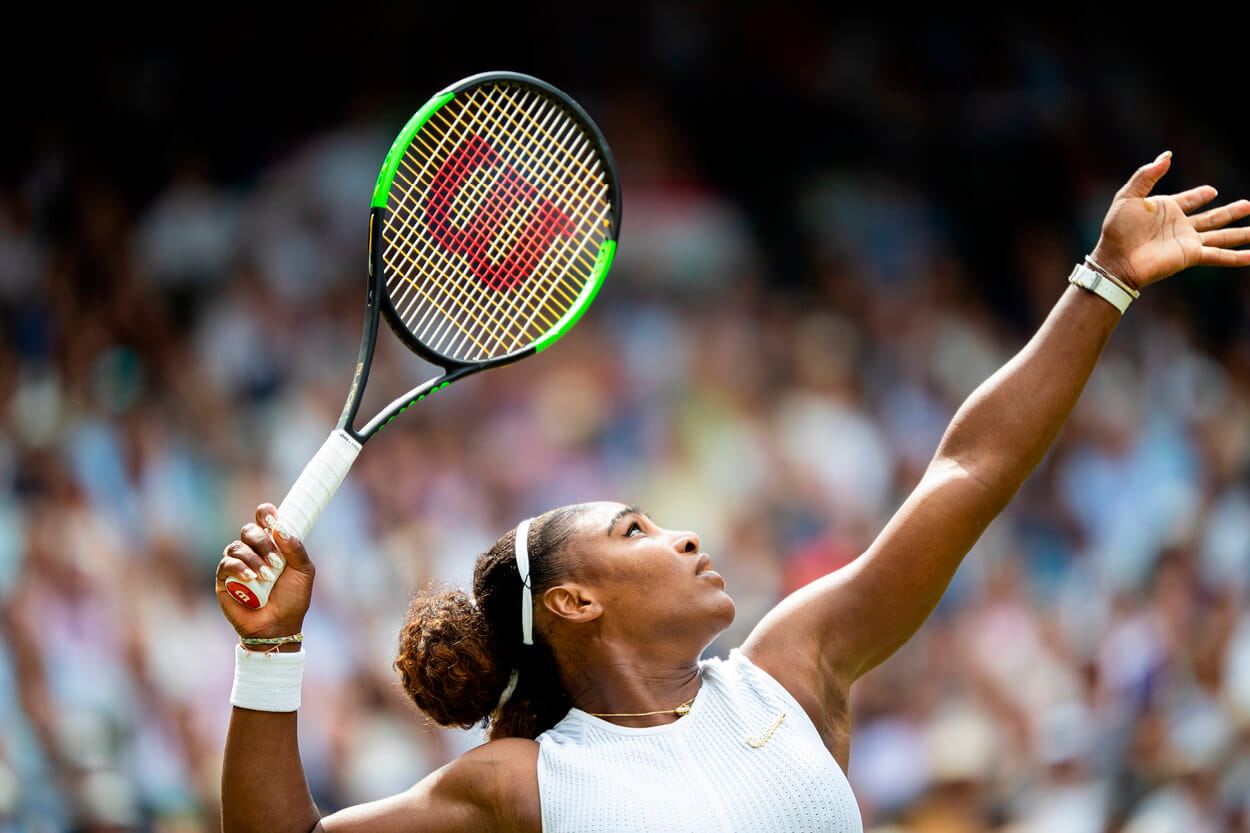 Four-time Grand Slam champion Naomi Osaka will be absent while three other major winners from the top ten, Sophia Kenin, Biana Andreescu and Iga Swiatek, have never set Wimbledon alight. Yet. Victoria Azarenka, vastly experienced, has played herself into decent form this season while Ons Jabeur, the all-court Tunisian, could be one to watch after sealing the title at Edgbaston. And let’s hope the Johanna Konta is inspired by lifting the trophy in Nottingham. I’ve always believed she’s capable of winning this thing. Let’s go, Jo!

All of which makes us consider if things are aligning for Serena Williams, the seven-time Wimbledon champion? For the past four years she's been attempting to equal Margaret Court's all-time record of 24 Grand Slam singles titles. Four times she's played the Championship match on the mark of 23; including two at Wimbledon, most recently that 2019 thashing at the hands of Halep.

Like Federer, you wonder if the record may ultimately elude her.

Similarly, her claim to greatness is not defined by numbers. It's already guaranteed.

After all, we're watching tennis in the era of all-time greats; be that Serena Williams, Roger Federer or Novak Djokovic. How fortunate we are to be enjoying these all-conquering athletes in a time which will, surely, never be seen again.

Plonk the kids in front of this epicness and settle back for a memorable, potentially record-breaking Wimbledon!